When Mrs. Selfish and I were looking at Vietnam, we decided to visit the places we skipped during our honeymoon: Nha Trang, Dalat, and Hoi An.  Danang was more of an afterthought, the closest airport to the beautiful UNESCO heritage town, Hoi An, more than anything else.

After booking 5 nights in Hoi An, I started looking for a decent hotel to crash for 2 days in Danang. I settled on the Intercontinental Danang Sun Peninsula Resort, the place “Where Myth meets Luxury,” according to their website. Given how ridiculous their tagline was, how luxurious could it be possibly be?

The answer was, without a doubt, the most luxurious place Mrs. Selfish and I have ever stayed or will ever stay.

Up until this year, Mrs. Selfish and I had only stayed at one fancy hotel in our 13+ years together, and that was the Sofitel Hanoi for our honeymoon.  Normally we tend to stay at moderately priced hotels – somewhere above hostel quality, but well below your Conrads, and or dare I say, Hiltons.

So this year has come as a bit of a shock to the old system.  Miles and points have allowed us to stay at more expensive properties like the Westin Munich for Oktoberfest, or the Park Hyatt in Zurich, which we tried because I wanted to see what a $700 hotel room was like.  We even paid cash to stay at El Nido in Palawan with friends, a once in a lifetime experience.

But the Intercontinental Danang took the cake.  We booked a standard room using points + cash for two nights, for a grand total of 30,000 Priority Club points + $140.

The Intercontinental is about 30 minutes outside of Danang proper, and is roughly an $18 cab ride to the airport.  Once you’re at the resort, it’s pretty difficult to leave.  But why would you? Here’s what we were faced with on arrival:

Before leaving Hoi An, Mrs. Selfish and I discovered the Atrium Suite was the recommended way to go.  We asked about upgrades on arrival, and were told Mrs. Selfish could pay to become an Intercontinental Ambassador for a year for a $200 fee.  If you plan on staying at multiple Intercontinentals in a year, I highly recommend this option.

For $200, Ambassadors get complimentary upgrades at all Intercontinental properties – so we ended up getting the Atrium Suite (which retails for $450 a night). Ambassadors are also given a free night to use at any Intercontinental, and a gift on arrival. 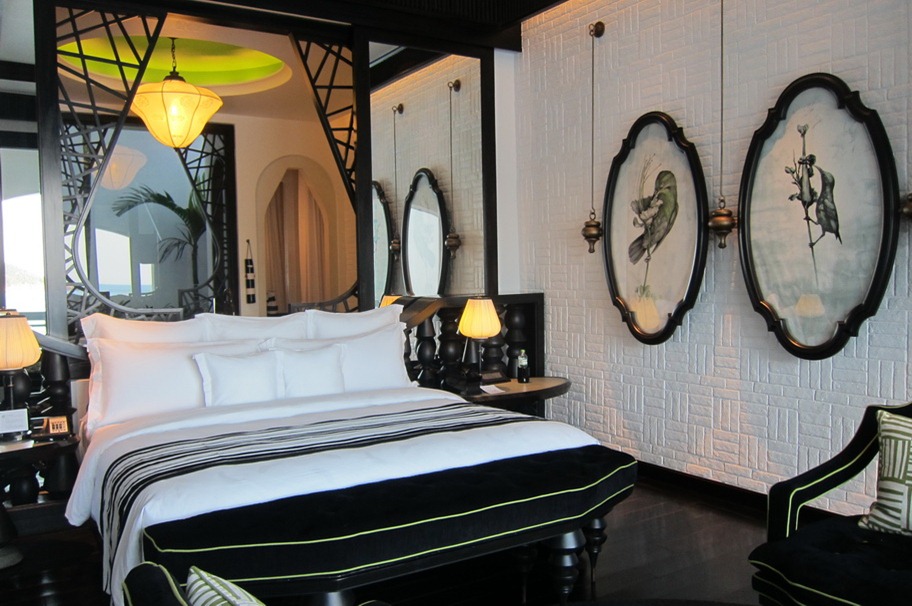 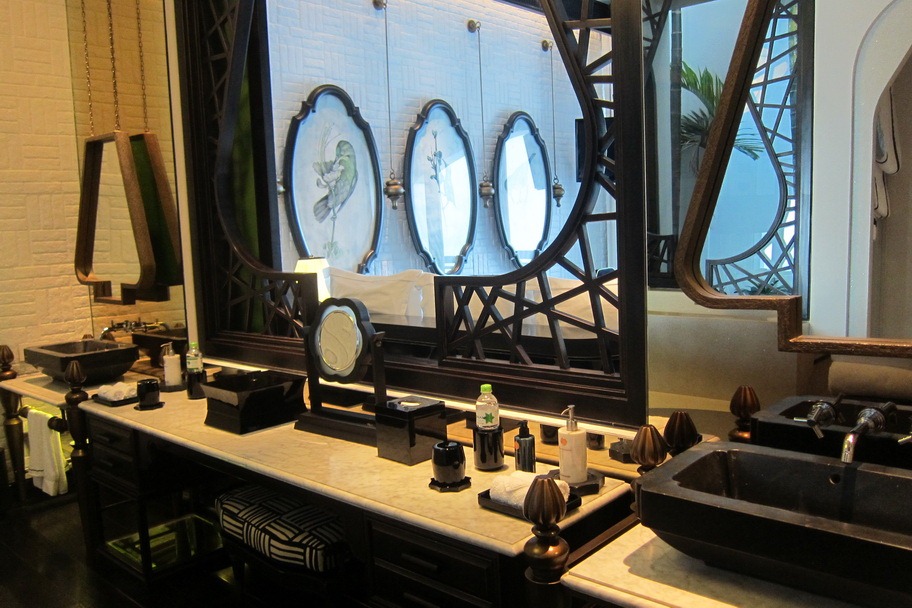 The Intercontinental is still under construction and doesn’t officially open until March 2013, so everything in the Suite was brand new.  Mrs. Selfish especially enjoyed the bathtub, which came with a loofah and a Japanese-style wooden water cup which you use to pour water on your head. The shower (not pictured) was a true waterfall-styled experience.  The bathroom was also equipped with separate Harnn amenities + Toiletries Kit for man & woman, bathrobes and slippers (which have since then continued their journey with us). The suite is equipped with a bose sound system + ipod docking station, and an illy espresso machine

What really took the cake, however was the outdoor patio, which had a dining table for 4, a desk, a living room area, and a day bed complete with mosquito net: 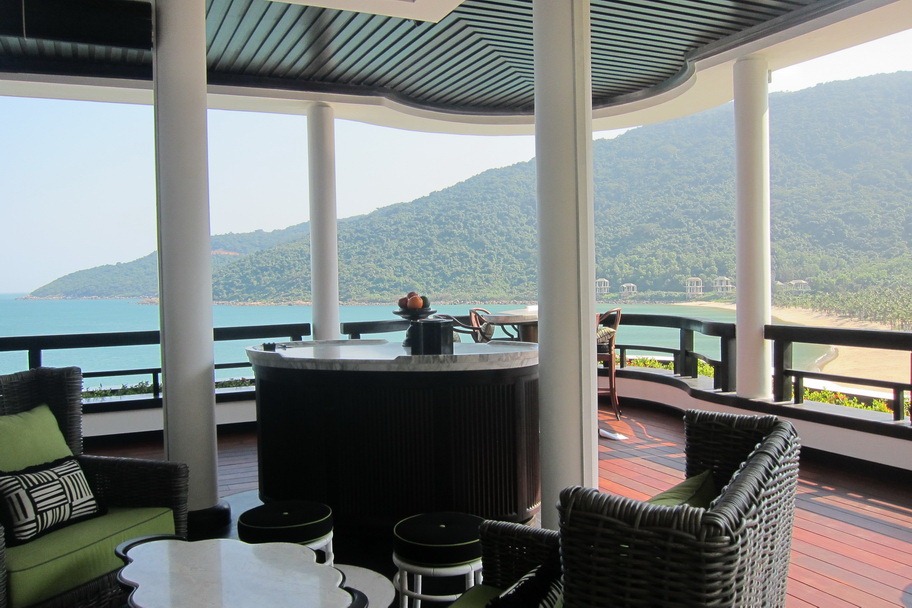 Complimentary bottle of wine & cake as an Ambassador Gift

They have tons of food options, but most are kind of pricey – entrees start at $20+ , while breakfast is $25 for an all-you can eat buffet.  Breakfast was situated in the amazing Citron restaurant, which is perched at the top of the resort: 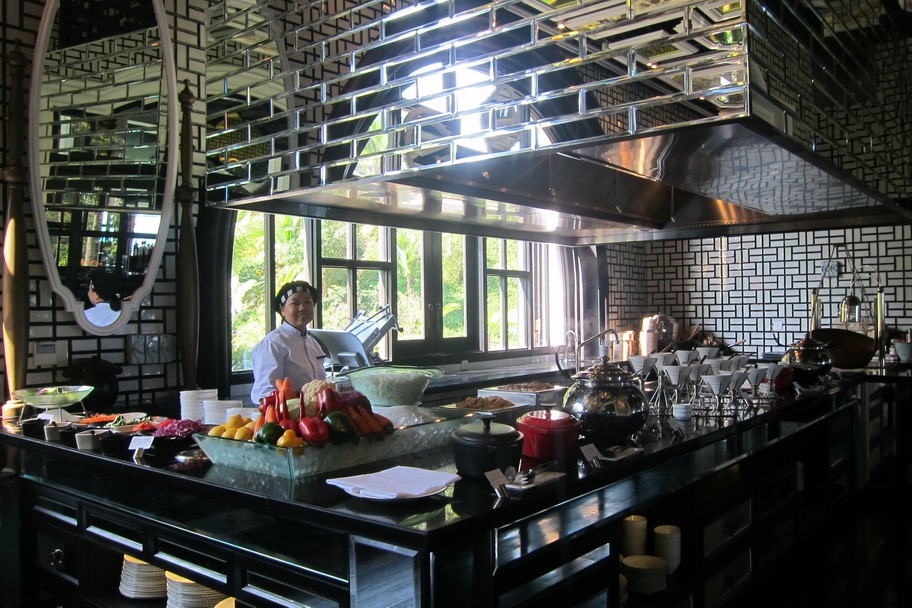 The resort is split up into 4 levels: sea, earth, sky, and heaven.  Each level is accessible by one of the two running cable cars, which are themed as wooden boats: 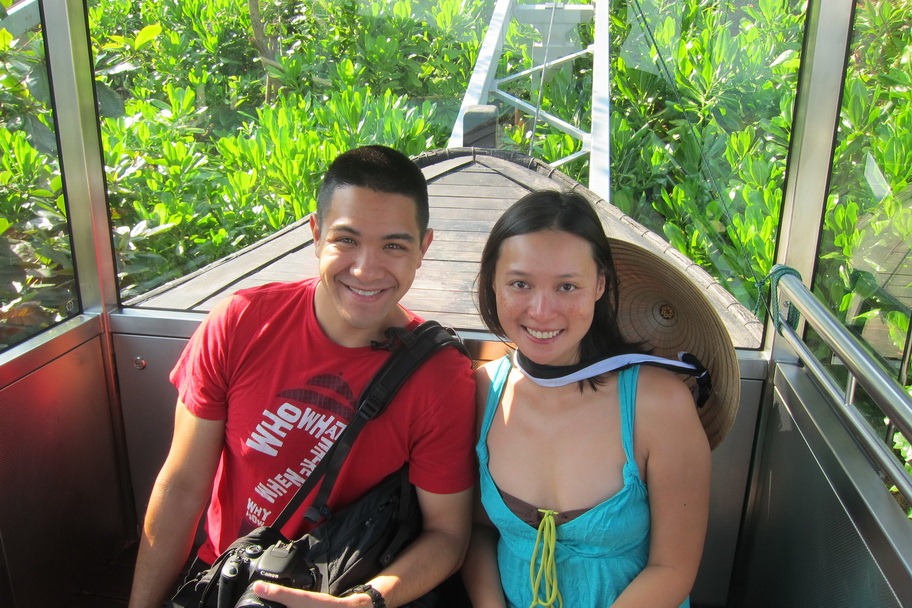 Exploring the grounds, we found the resort to be all but empty.  Given the size of the resort, I counted less than 100 guests, which was surprising given our proximity to Lunar New Year. As far as activities go, you can borrow a kayak or long board.  There’s also snorkeling, and the pool is quite refreshing. 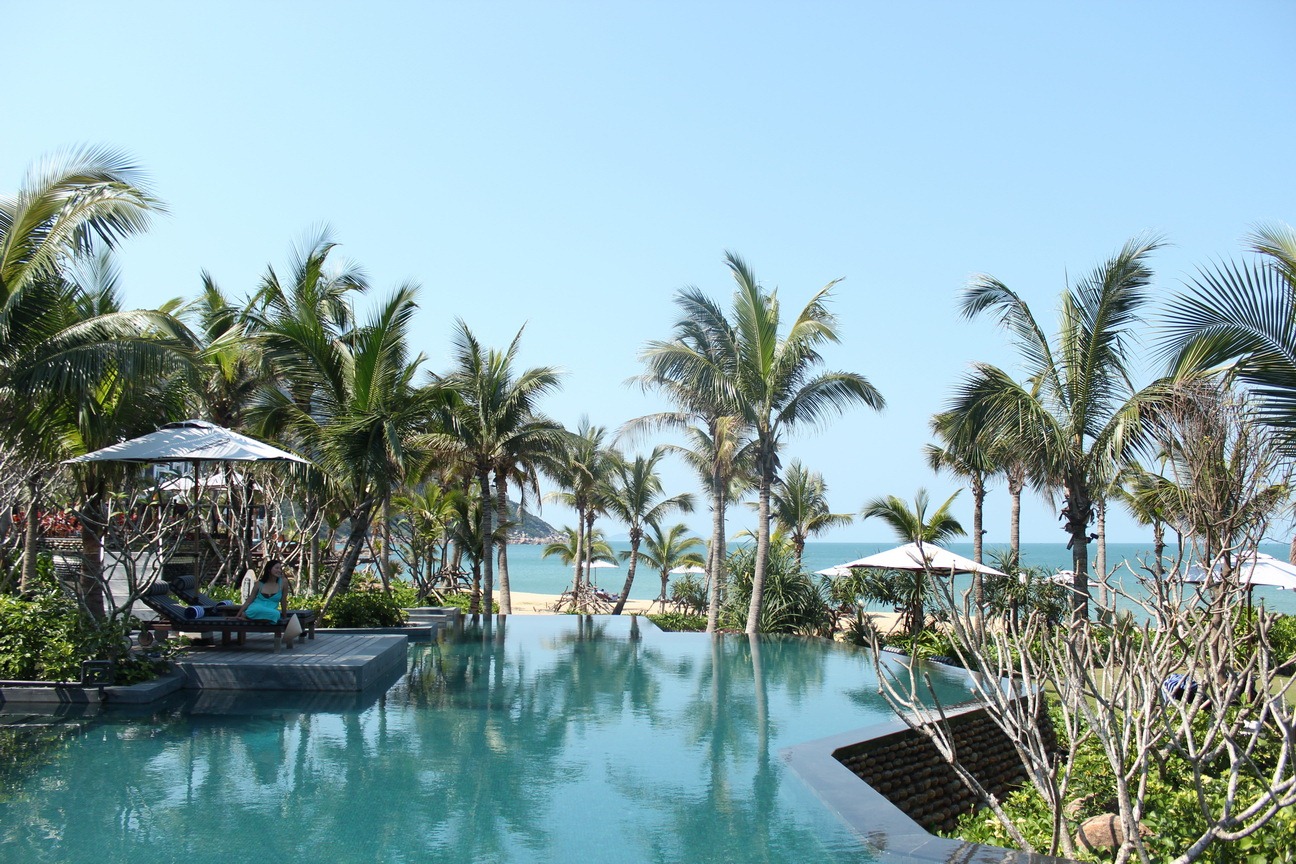 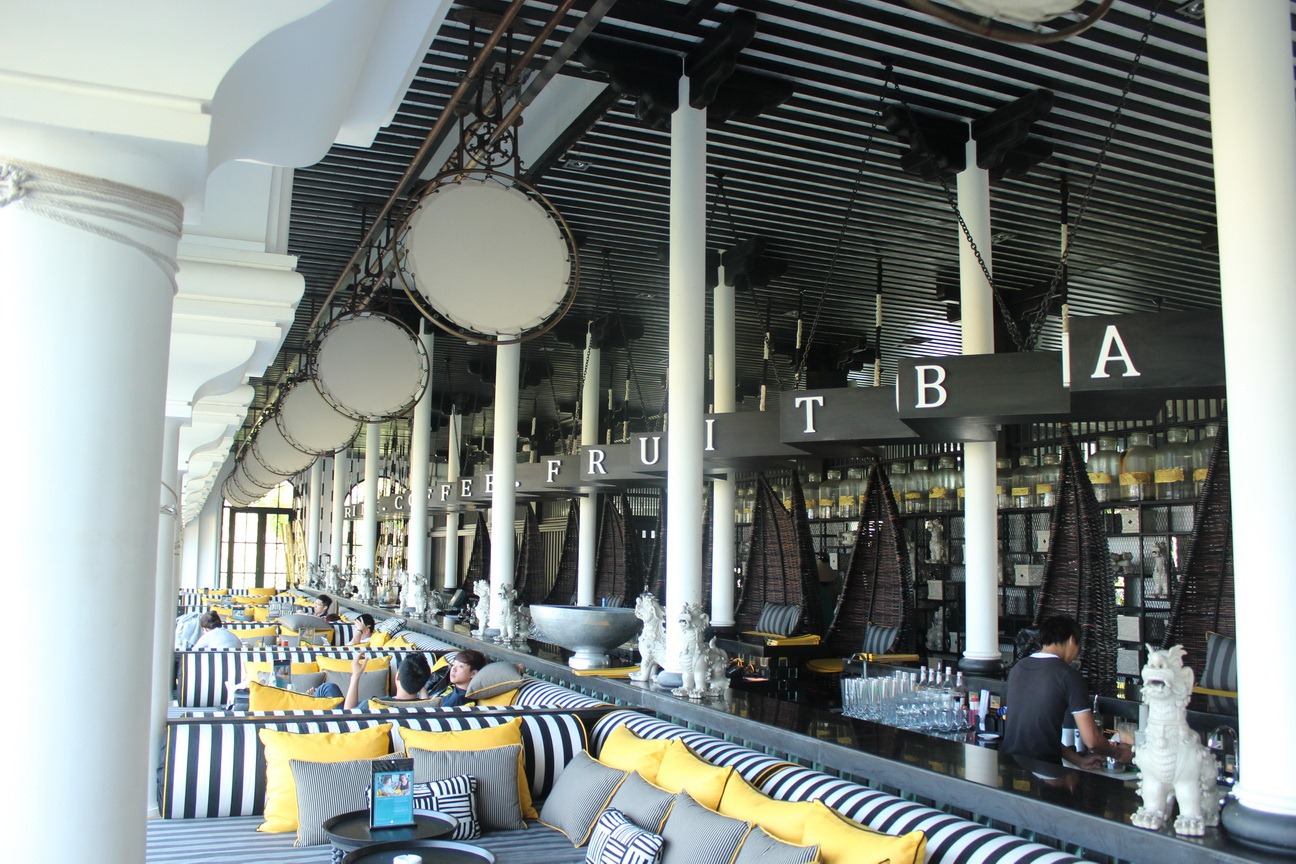 The Intercontinental Danang Sun Peninsula Resort is easily the most ridiculous place we’ve ever stayed.  At 25,000 points a night, or 15,000 + $70 for a points & cash redemption it’s totally worth the price of admission.

Priority Club does tons of surveys and promotions – I’ve earned 12,000 points without ever setting foot in a PC hotel.  You can also apply for the Chase Priority Club Credit Card, which gets you 80,000 points on first purchase, a free night at any PC property anniversary, with the annual fee waived for the first year.