For our stay in Hong Kong I booked a last minute 5-night award to the JW Marriott HK only a week before we arrived.  Under the old category definitions, the JW was a category 7 hotel, meaning it cost 35,000 Marriott reward points a night.  Thankfully, Marriott Rewards gives you the 5th night free on award bookings, so our stay cost 140,000 Marriott Reward points.

Since Mrs. Selfish and I both applied for the Chase Marriott Rewards card, we both had a free night and 70,000 Marriott Reward points to burn!  Marriott is also nice because multiple family members can apply points toward one award, allowing me to Mrs. Selfish’s points if I fell short.  This was especially useful, because for our time in China I was planning on getting platinum status.

Unlike other hotel chains, Marriott allows just about anyone to try their “Taste of Platinum” challenge. By completing 9 paid stays in 3 months, plus the month you request the challenge, you’ll earn Marriott’s platinum status for the next calendar year.  Although it’s an amazing shortcut, the biggest benefit is the “taste” itself – for the duration of those ~3 months you’ll actually get platinum status, which gets you free internet, breakfast, a welcome gift, your choice of amenities, and an upgrade to a better room. We pulled a similar trick in Spain with Mrs. Selfish, but the AC Hotels didn’t really recognize platinum status quite the way Marriott-branded hotels in Asia do.

In Asia, they do one better, since there’s a great chance you’ll be upgraded to a suite.

Checking in was an extremely smooth process, and almost surreal.  We must have been greeted by more than 5 different staff members before we arrived at the front desk.  Although we only waited for 10 seconds, the front desk clerk apologized for the delay.  She then thanked me for my loyalty as a platinum member, and confirmed our stay for the next 5 evenings.

Here’s where it gets interesting.  The benefit states that platinum members are eligible for suite upgrades based on availability, and that upgrades over 3 nights are at the hotel’s discretion.

Since we were staying for 5 nights, I didn’t have high hopes that there would be any availability, but I kept checking for suites online, and their website showed they had availability as recently as that morning.

Although we were placed in an Executive Level room with a harbor view, I asked the front desk clerk if any suites were eligible for an upgrade.  After some furious typing, she confirmed that there were – success! 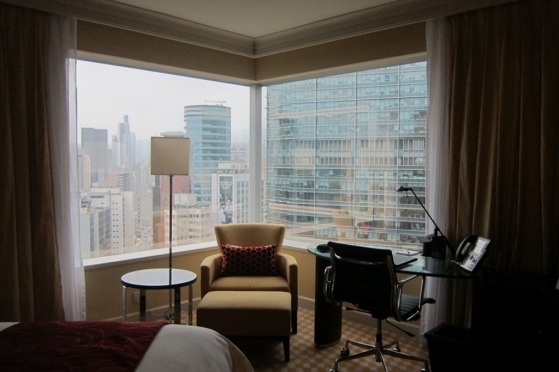 The suite was large, especially for Hong Kong with an entry room that was split into a living room with two couches, and a dining room with 6 chairs.  The bedroom itself was nice – the bed was firm, but comfortable, and the desk was very convenient.  Even better, we were able to connect our computer to the TV in the room (not pictured), so Mrs. Selfish and I were able to enjoy our movies and shows on screen bigger than my laptop.

The bathroom was nice, with a shower and bathtub, but a little too cramped for photos.  On the other hand, they did have the most massive bars of soap I’ve ever seen in a hotel room – which is the hockey-puck-sized object next to the bathtub.

As a platinum member, we had the option of amenities – so we ended up choosing ice cream and cookies.  We also had a welcome gift of wine and a small bottle of champagne! 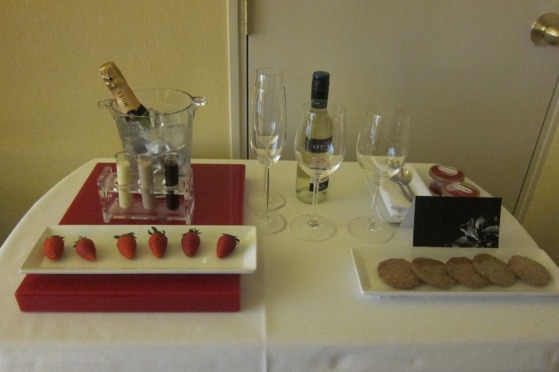 We enjoyed the cookies, but didn’t end up drinking the wine. Good thing too.  Having never had access to a hotel lounge before, I wasn’t prepared for the sheer amount of food they had on hand.

Located on the 33rd floor of the JW Marriott, the executive lounge had a vast selection of goodies and every night they had a happy hour from around 4:30pm – 8:30pm. Not only did they have a decent selection of beers and wines, but they also made mixed drinks on request – craziness!

You could also eat breakfast in the executive lounge, but Mrs. Selfish and I preferred the 5th floor dining area, since it had a superior selection of breakfast items.  It didn’t hurt that it was open a half an hour later, either. 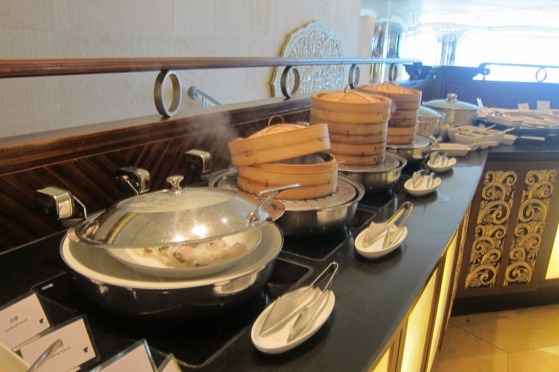 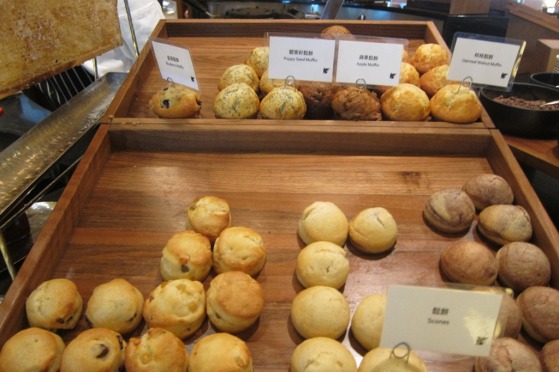 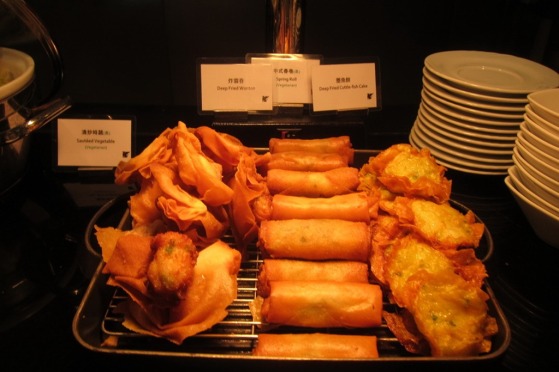 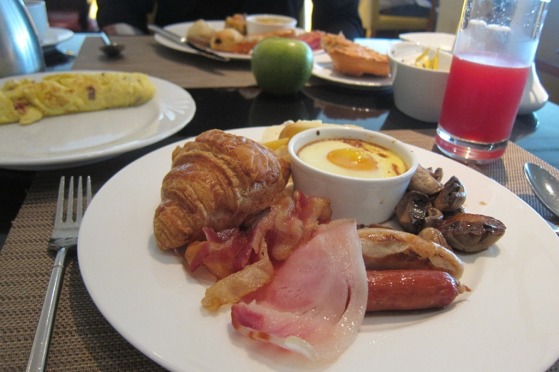 I would definitely recommend the JW Marriott Hong Kong.  Though a little dated, the hotel has been maintained splendidly, and I’ve never seen better customer service.  Despite our often shabby appearance, Mrs. Selfish and I were treated extremely well – I look forward to coming back again!

1 thought on “How Suite it is… at the JW Marriott Hong Kong!”