If you’re just joining us, Mrs. Selfish and I have been traveling the world for the last 8 months – largely on miles and points – or are we? While Mrs. Selfish touched on our favorite memories yesterday, today I thought I’d take a look and see what our trip has meant from a cost perspective.

Of those 91 cities, so far we’ve visited a total of 66.  So we still have a lot of fast traveling ahead:

So far we’ve visited 21 of the 25 countries we set out to see.  I was a little surprised by that number myself, considering we’re only 66% of the way in.  Then I looked at the country breakdown: 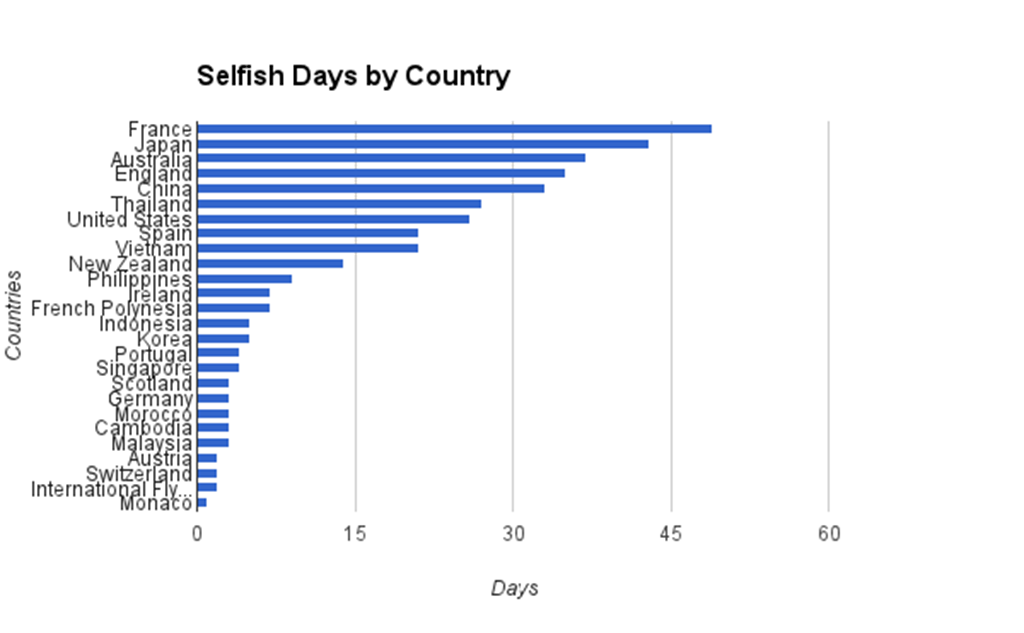 It turns out our upcoming stays in Japan and Australia account for 21.6% of the amount of time we’re spending abroad – probably two of the more expensive countries on this trip – whoops!

We spent the least amount of time in Monaco (1 day), followed by Switzerland, and Austria.  Interestingly, we’ll have spent 3 nights in the air – 2 nights on our way to Singapore (a red-eye + the time change), and 1 night on our upcoming leg from Japan to Australia.

Hotels, Apartments, and Beyond

But where are we spending our nights? For the last 3.5 months we’ve spent almost every night in a hotel, with the occasional apartment thrown in the mix, but if you look at the overall picture it turns out we spent the majority of our time in apartments. 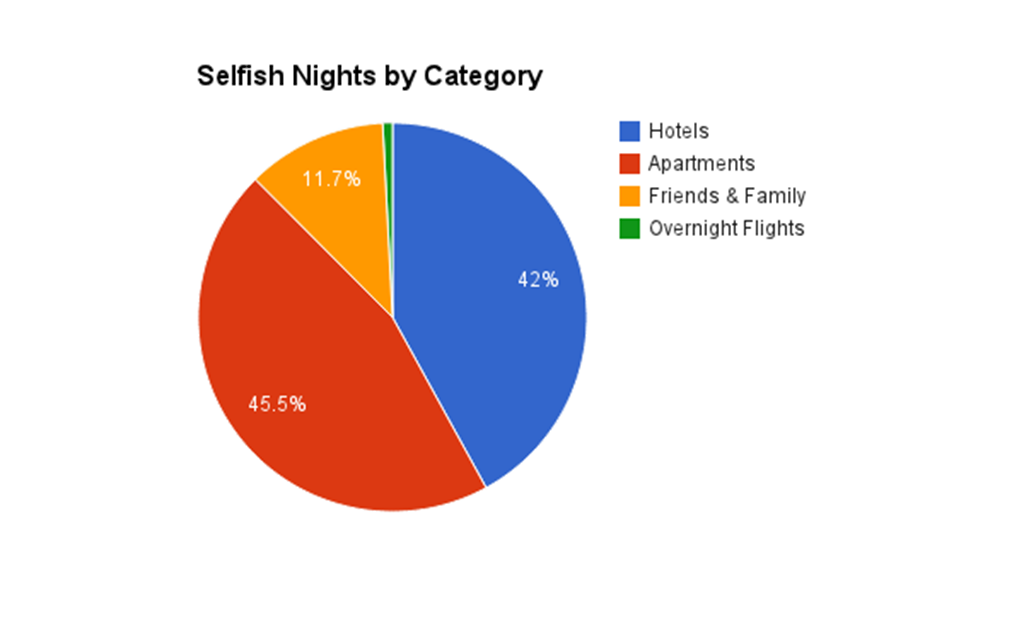 And how did we end up paying for all those nights?  The vast majority were paid for with cold, hard cash – plain and simple.  That makes sense, considering we rented apartments for roughly half of our trip. We’re also spending a considerable amount of time staying with friends and family in the US, Australia, and Europe. 9.2% of the trip is still unplanned, so those could go either way. 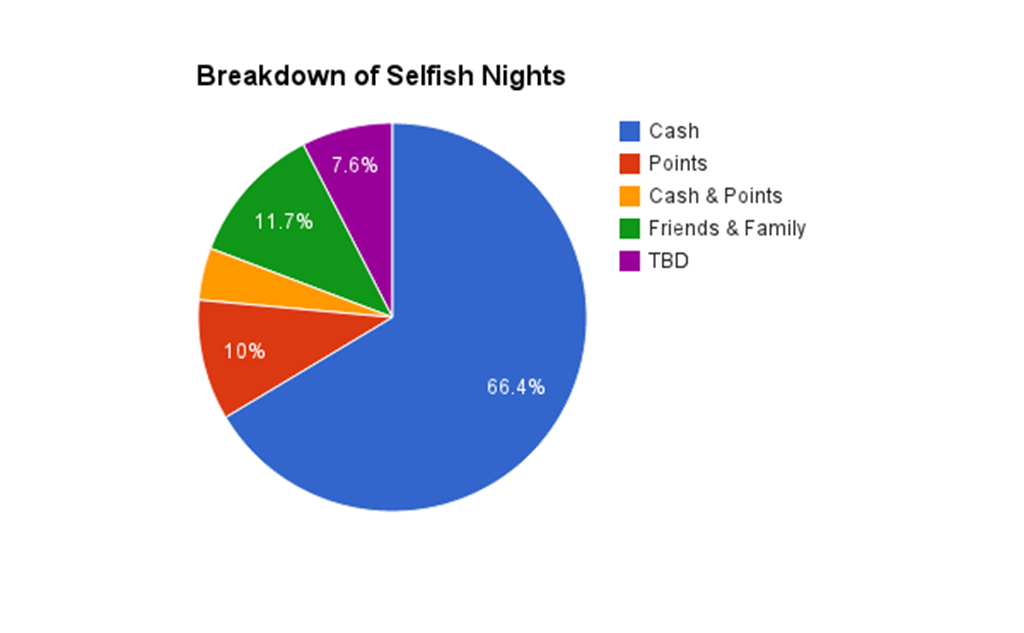 So how did we do on saving money with points?  Of 369 nights, so far we’ve stayed for free for 37 nights, and stayed at a subsidized rate using cash & points for 16 nights – for a total of 53 nights – that’s 14.3% of the trip! Combine that with stays with friends and family, and that’s a total of 96 nights or 26% that we slept for free (or very close to it).

The savings get even better if you look at the total number of nights we spent in hotels: 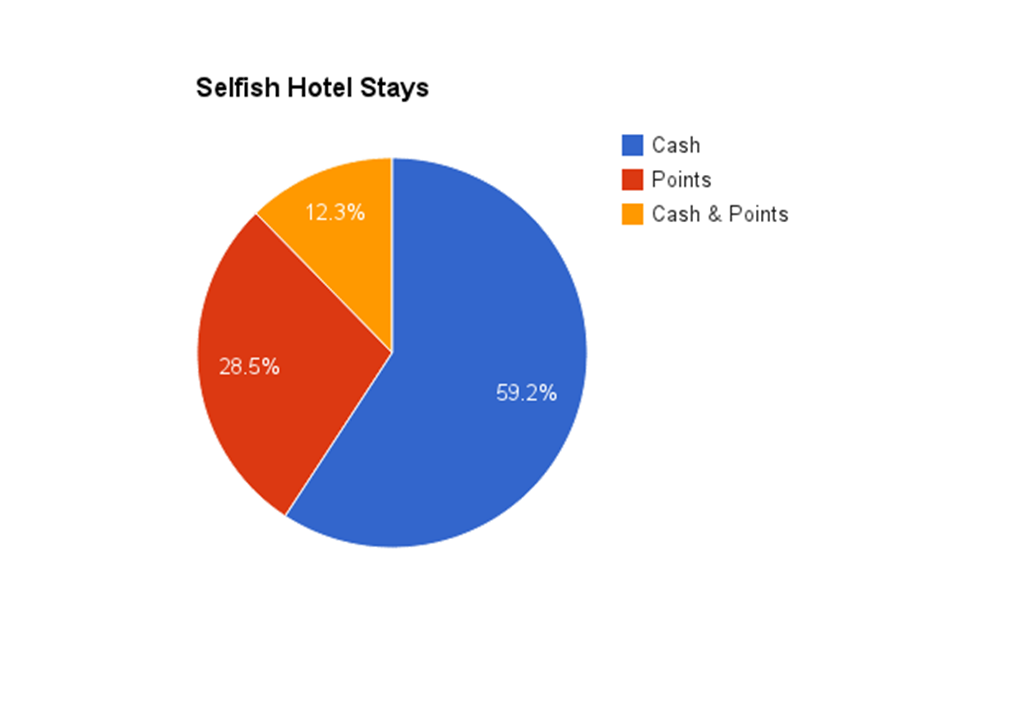 Slightly more than 40% of our stays were paid for partially or in full with points. We probably could have paid for more nights if we’d spread our points around, but Mrs. Selfish and I decided to blow most of our points on places we could never afford to stay otherwise.

Paying for flights with Cash vs. Miles

Surprisingly we ended up paying for a large number of flights.  Out of 58 total flights, 28 of those flights were paid for with miles, and 30 with cash. 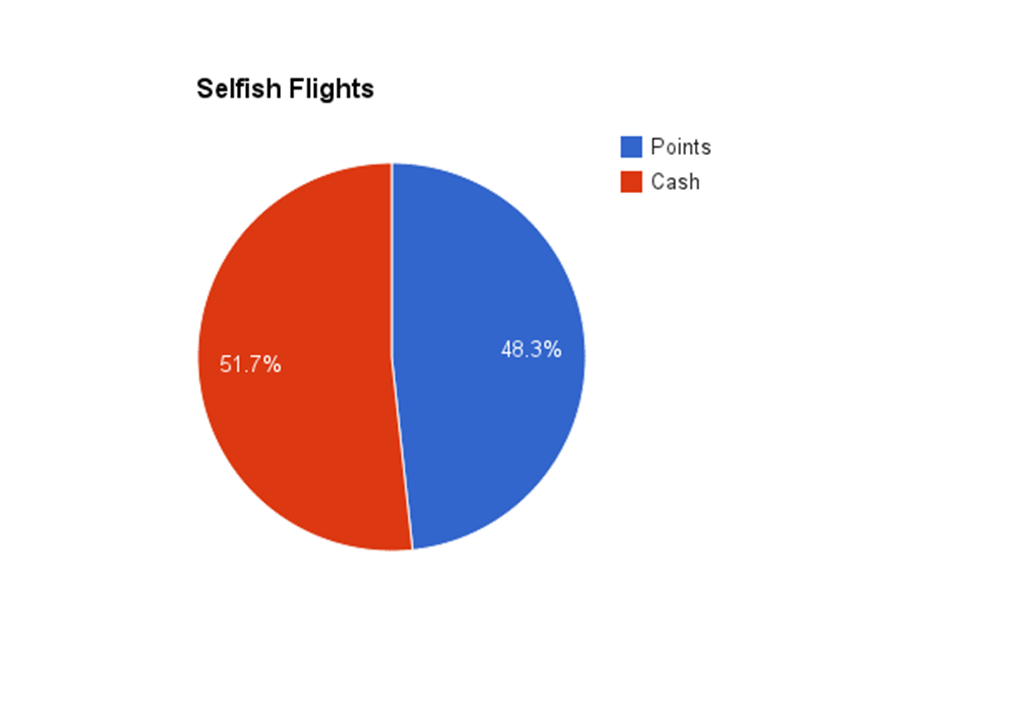 At first I was pretty surprised – after all one of the several tickets we’ve purchased with points allows us to fly 16 segments, which we definitely took advantage of.

In Europe we ended up taking the train and driving for a long portion of the trip, but Asia is a much different picture. Trains in Southeast Asia and large parts of China are slow or unreliable, and driving was out of the question, so we ended up buying a lot of flights in the Philippines, Vietnam, Thailand, and China.

However, if you look at the overall distance we’ve flown you see a different picture altogether: 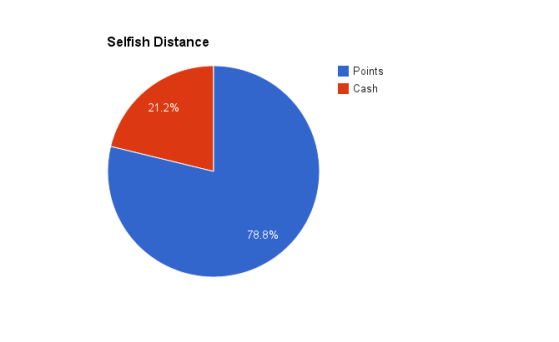 Of the 65,839 miles we flew on this trip, only 13,957 were on flights paid for with cash.  The lion’s share of 51,882 miles were paid for with points, and were largely in business class.  While we did pay for a number of flight segments out of pocket, most of these ended up being short-haul flights on budget carriers like Ryanair and Air Asia where we couldn’t use miles.

By using miles and points Mrs. Selfish and I saved a boatload of money on our selfish year adventure.  Our single largest expense, our intercontinental flights, were paid for outright with miles, while a large portion of our nights were free or at a reduced rate thanks to points or friends & family.

While miles and points definitely helped us make our trip more affordable, cash is still king in large parts of the world, so make sure to build a decent travel savings account when planning a round the world adventure of your own!

15 thoughts on “The Costs of 8 Months of Selfish Traveling”