Shortly after Mr. Selfish and I had planned our trip to China, we started hearing reports of the horrible pollution in Beijing. Initially, we had wanted to spend an entire week there, but we decided to shorten it to four days. We had an extra three days and chose to visit Datong, which is a smaller city in the Shanxi province northwest of Beijing.

Most people in the States have never heard of Datong, and the locals we met in China were surprised that we were going there. Two Shanghainese locals even asked us, “Why are you going to Datong?” I now have the answer – because Datong is awesome!

Datong is located close to the Hanging Monastery and the Yungang Grottoes, both of which were the best sights we visited in China (aside from the Great Wall). Yes, they were much better than the Terracotta Warriors in Xi’an and even better than holding a baby panda in Chengdu.

The sight that I enjoyed the most was the Hanging Monastery, which is about an hour and a half from Datong by car. It is a temple that was built 246 feet above the ground. Legend has it that the temple was built by one man, a monk named Liao Ran, more than 1,600 years ago.

We had lovely sunny weather even though it was quite windy and cold. The walk up to the Hanging Monastery was quite easy and only took about 10 minutes.

The Hanging Monastery has Buddhist, Confucian, and Taoist elements, which is rare for a single temple. 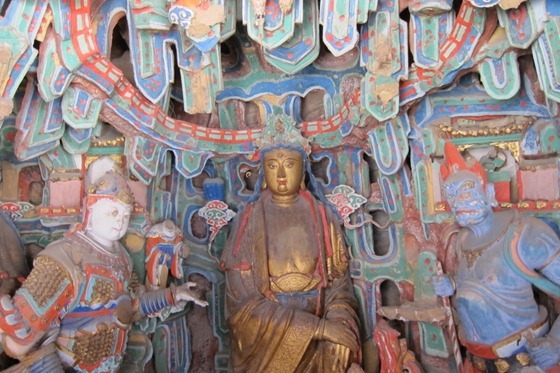 It was a sight to behold, and better yet, it was mostly empty. It seems that the Hanging Monastery is not one of China’s big ticket tourist attractions yet, but I predict that it will certainly become one. Admission was 130 yuan per person, which is expensive but worth it.

If you visit China, I highly recommend visiting Datong and the Hanging Monastery!