Bidding a wary goodbye to the Grand Hyatt Fukuoka, Mrs. Selfish and I packed our bags and prepared for 2 days in charming Kurokawa Onsen Town.

The Japanese take their hot springs very seriously, and onsen bathing is a tradition that goes back several centuries.  Over the years, the experience has become more and more modernized, and people have taken to bath houses as well, so we were particularly excited to go to Kurokawa Onsen Town.

While everyone else modernized, Kurokawa stuck with preserving tradition, and the result is a stunning, traditional town with dozens of ryokans and onsens in an spiritually soothing environment.

This is a place you come to relax.

The easiest way to get to Kurokawa is by bus from Fukuoka.  The bus runs twice a day from Fukouka’s Hakata bus terminal – once in the morning around 9am, and once in the afternoon.

Tickets cost roughly 5400 yen round trip (~$54) and the entire trip takes about 2 hours.  On the way back, we took the bus directly to the airport, which ended up taking 1.5 hours.  The bus is comfortable and the ride takes you through the scenic Japanese countryside.  The only downside appears to be the lack of bathroom on the bus itself.

Kurokawa Onsen Town is a beautiful town, with an economy built largely on tourism.  Upon arrival, we immediately hit the information office and picked up a map of the town.

We also purchased an onsen pass, which allowed us to visit 3 onsens for 1200 yen total.  Since each onsen charges 500 yen per visit, we ended up saving 300 yen each – not bad.

The town itself is really charming. There aren’t a whole lot of restaurant options, since most people eat at their ryokan, but you can pick up some of the basics, and the prices are quite reasonable.

Hitting up the Onsens

And now for the main purpose of the trip – the onsens!  While you can walk most of Kurokawa on foot, several of the better onsen are on the outskirts of town.  To make matters easier, Kurokawa provides a free shuttle service.

The shuttle drives the same loop every 30 minutes, and you flag it down by waving at the driver. Once you board, simply tell the driver where you want to stop.  Pretty simple stuff.

Once you reach the onsen of your choice, give the ryokan-keeper your pass (or pay them 500 yen), and proceed to the onsen.  Onsen are separated by gender and are a totally nude affair, so be warned – you will see lots of naked Japanese people. 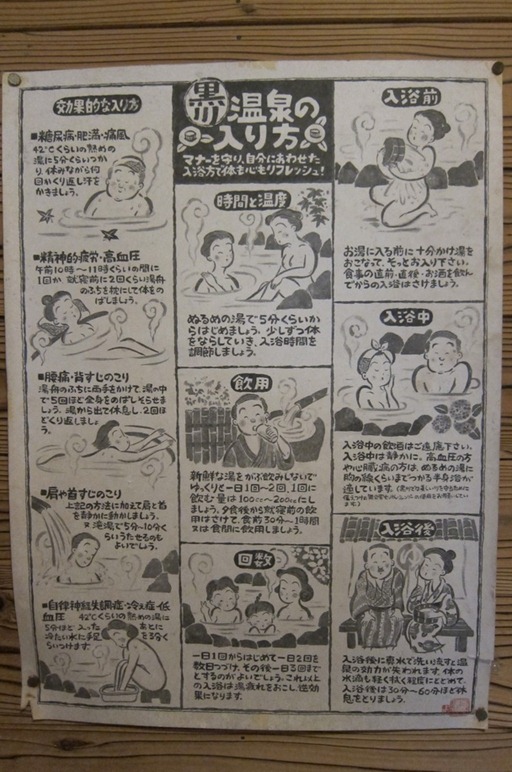 Step 1: Go to the onsen of your gender.  The men’s side is usually blue, while the women’s is red.  Some ryokans or bath houses switch it up, and alternate which gender gets which onsen (sometimes by day of the week), so pay attention!

Step 3: Rinse down with water – especially your feet. Just like entering a pool – grab a bucket and dose yourself with a healthy splash of water.  People often use water from the onsen itself. You’re supposed to soap up and rinse down before you enter, but everyone I saw tended to hit the soap after soaking in the onsen.

Step 4: Soak and enjoy the scenery – quietly. I often had the entire onsen to myself, which was pretty peaceful, but most Japanese tend to go in groups.  You and I might consider it pretty strange to see one’s friends in their birthday suits, but apparently it’s pretty common in Japan. Despite the fact that they were in groups, the general etiquette is to talk quietly, or else say nothing at all – so as to preserve the peaceful atmosphere.

Step 5: Wash off, scrub down, and rehydrate. Every onsen we went to provided customers with shampoo and body wash.  Clean yourself and dry off.  Some of the onsen even had blow dryers and q-tips. Remember to drink plenty of water since you’ve been sweating nonstop.  We didn’t realize until later that you could drink the water coming out of bamboo shoots in the onsen itself, but I’m not sure we would have given the choice.

Step 6: Time for the next onsen. After leaving one onsen in Kurokawa, we usually made our way to the next one, stopping for lunch or snacks in between to cool down.

Not counting our own Ryokan, Mrs. Selfish and I ended up visiting 3 onsen – just enough to make full use of our pass. Although all of the ryokans we visited had indoor and outdoor onsen, we ended up focusing on the ryokans with the most beautiful outdoor onsen.

Here’s the beautiful Ryokan Yamamizuki, whose ladies and men’s onsen both face the same magnificent stream: 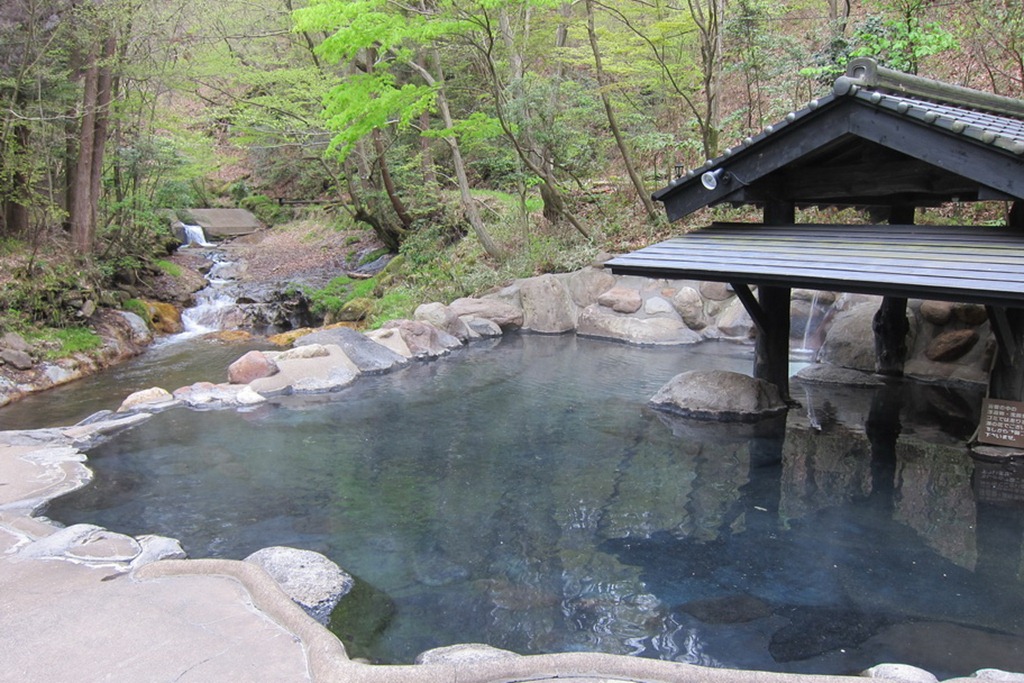 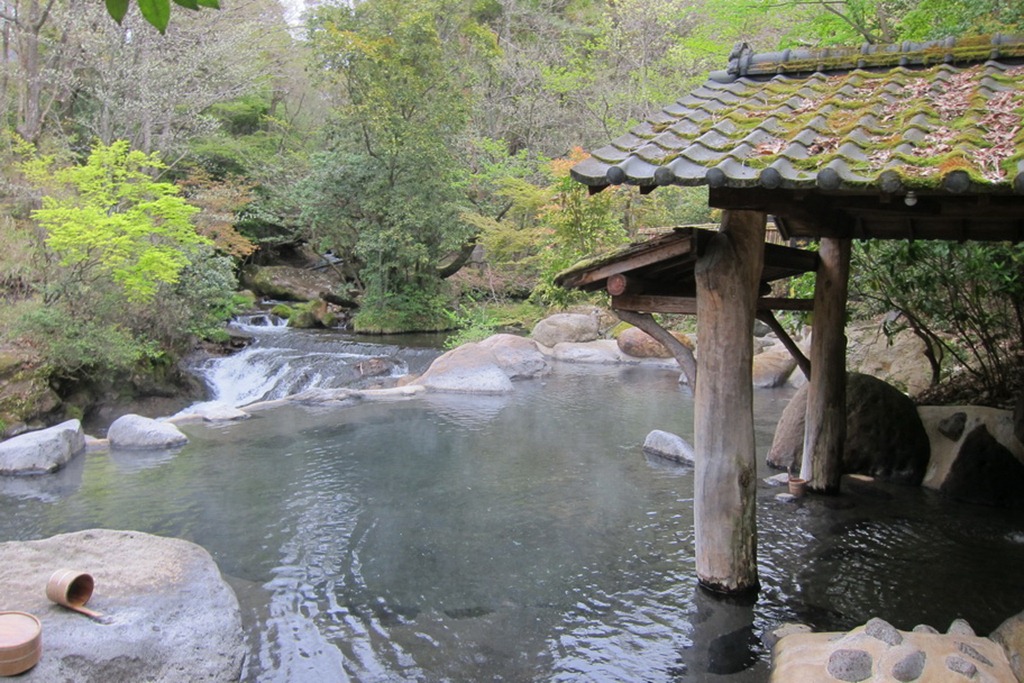 Next we visited Hozantei, which was located all the way on the outskirts of town. There was a smaller stream in back, and also a cold water onsen, which was separated from the main onsen by a small stone barrier. 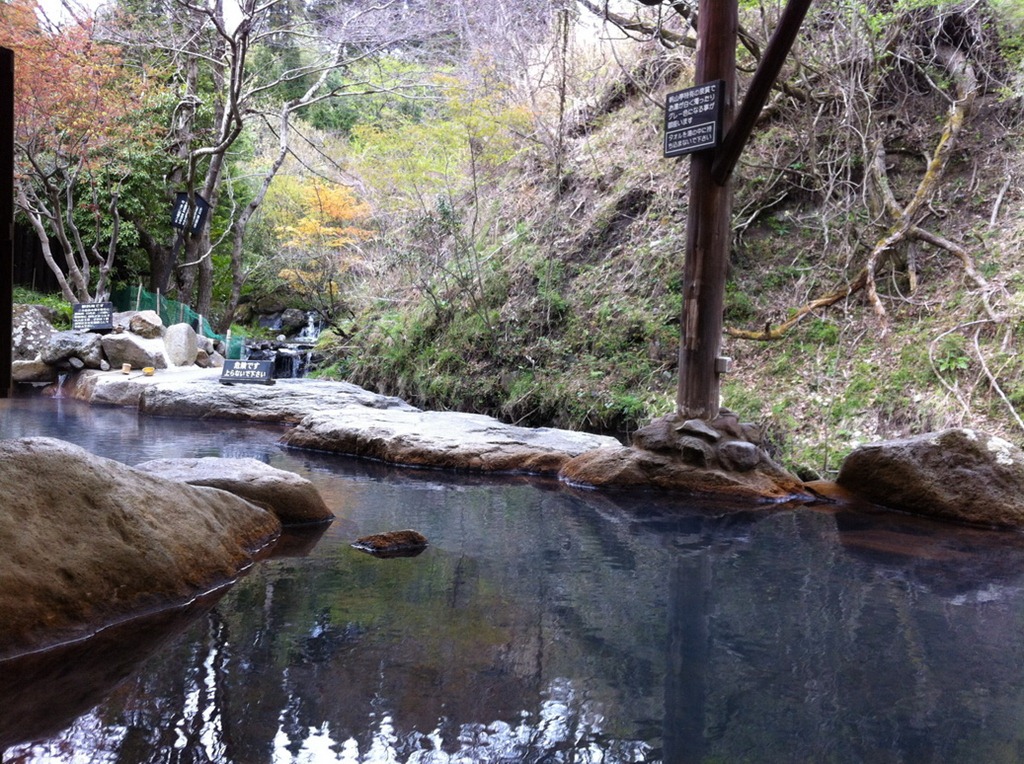 For our last onsen, we visited Yambiko Ryokan, closer to the center of town. 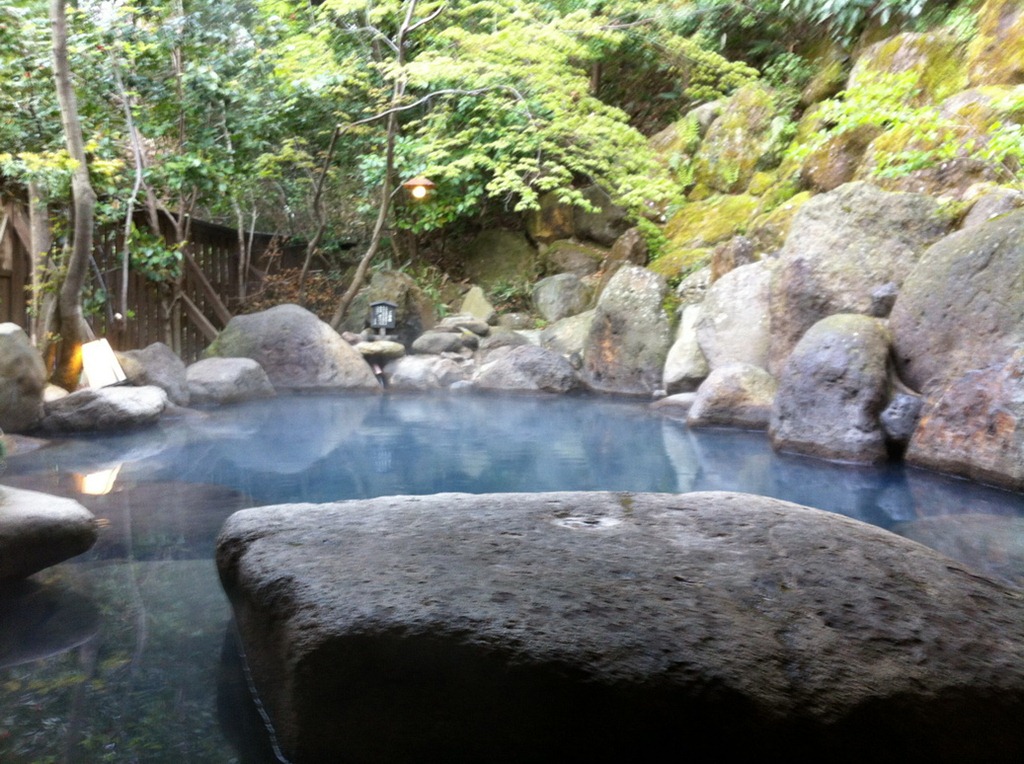 Visit an Onsen Town near you!

Visiting Kurokawa Onsen Town was definitely one of the coolest things we did during our 6 weeks in Japan.  Not only is it a great cultural experience, but it was also one of the most relaxing ways you can spend a day.

If you’re planning a trip to Japan I highly recommend an onsen daytrip, and if you have the time I can’t think of anywhere better than Kurokawa Onsen Town!