During our previous trip to Japan, Mrs. Selfish and I had the pleasure of staying at a ryokan in Hakone.  A Ryokan is a traditional Japanese hotel, known for a three things: kaiseki meals, traditional rooms and garb, and onsen.

Last time we only stayed for one night, so this time around we decided to splurg and stay for two nights at the Ryokan Sanga. 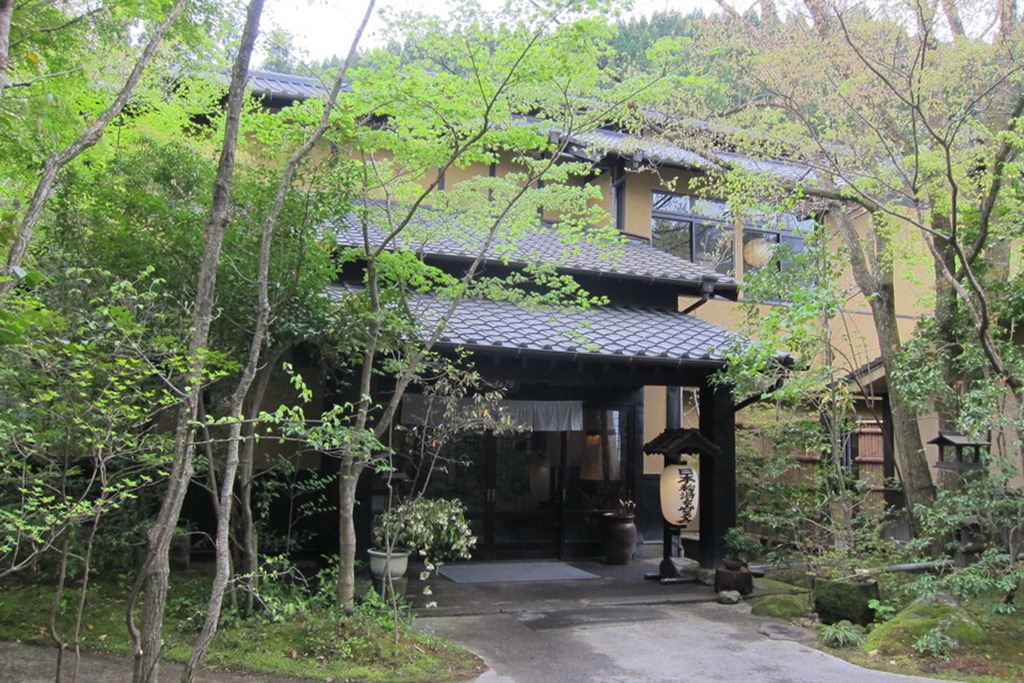 Checking in and The Room

Ryokan Sanga is a little outside of Kurokawa, but they offer a complimentary shuttle service.  I contacted the staff ahead of time via email, and the shuttle driver met us at the bus stop to take our stuff to the ryokan.  After wandering the town for three hours, we returned to the town’s information office, where the driver picked us up and took us to Ryokan Sanga. 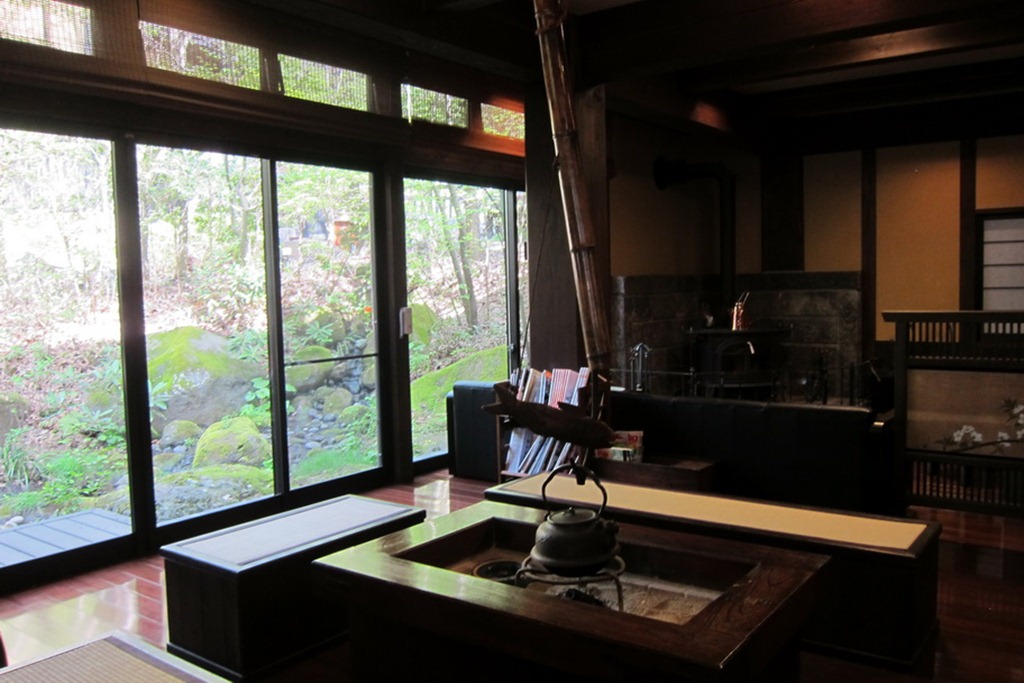 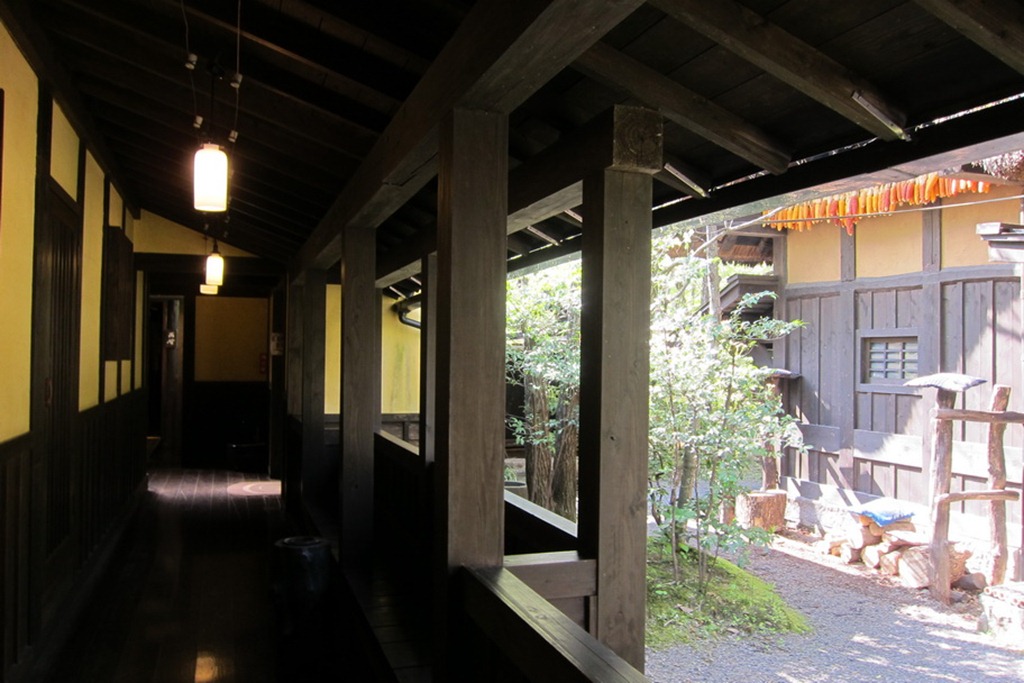 After checking in, we were escorted to our room, which was a nice little 4 room affair. There was a small kitchenette to make coffee in the morning, the bathroom which had the latest in Japanese toiletry, and the main living room.

But the most exciting feature about the room, was our own private onsen!

If you’re interested in staying at a Ryokan, I highly recommend looking for one with a private onsen.  The difference was about 2000 yen a night, or close to $20, and was worth every penny.

Ryokan Sanga is located in a secluded part of Kurokawa, right on a stream and far away from anything else.  Like many ryokan in the area, Ryokan Sanga has its own private onsen – one for women, and one for men. 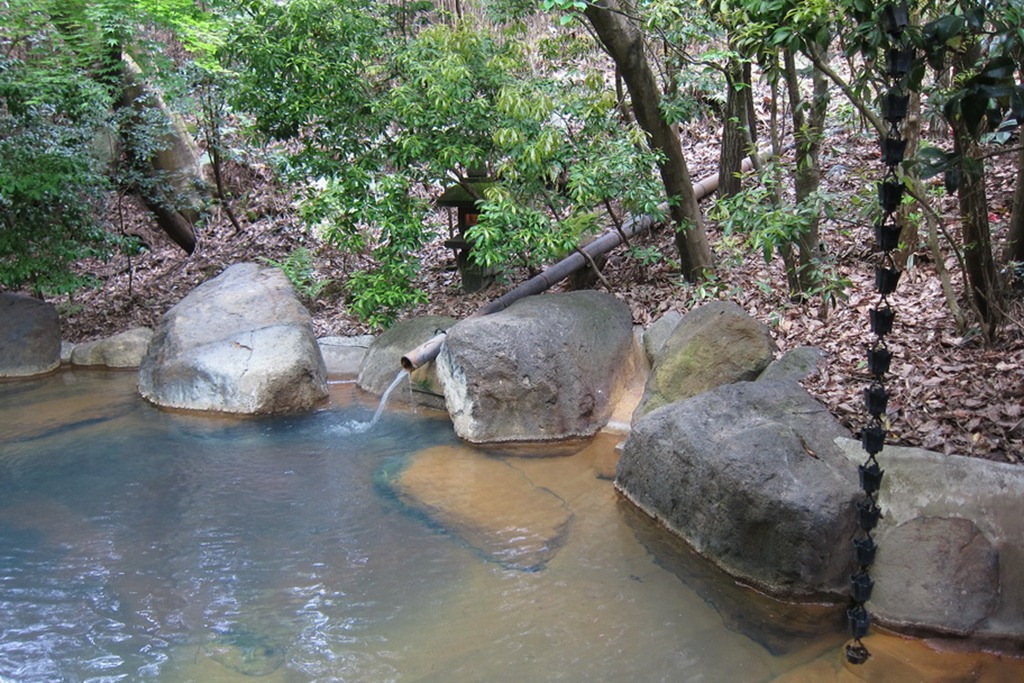 Mrs. Selfish and I visited the Ryokan Sanga’s onsen three times.  Both onsen were largely empty. The men’s side had at most 3-4 visitors at one time.  The women’s side was slightly busier, but Mrs. Selfish reported having it to herself a few times.

Ryokan Sanga also has a few private onsen that you can book by request. Although they have both indoor and outdoor onsen, Mrs. Selfish and I decided to book one of the outdoor ones.  Unfortunately, it was border-line scalding and after a few minutes we beat a hasty retreat.

It turns out the rooms are so expensive because of the food.  Most ryokans serve kaiseki meals, a traditional multi-course dinner that can run anywhere from 4000 – 40000 yen.

After arriving we arrange to eat dinner at 7pm each night.  The first night we showed up in our street garb, but after noticing everyone was wearing their yukata (traditional Japanese robes), Mrs. Selfish and I decided to go native the second night. 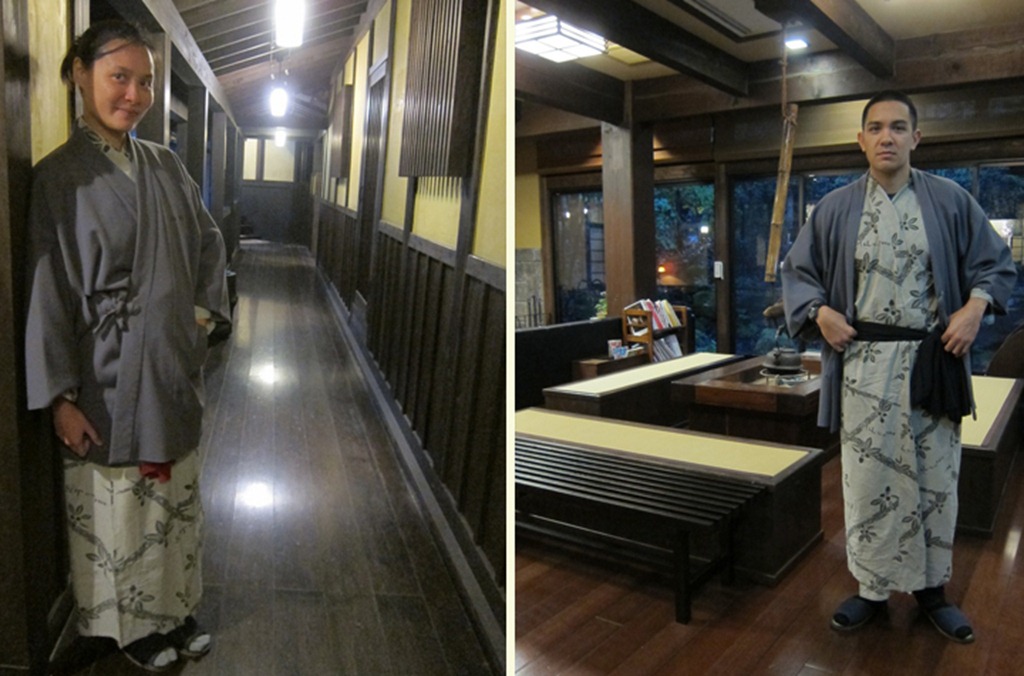 The food was sublime, and eating in the ryokan itself made for an atmospheric experience. 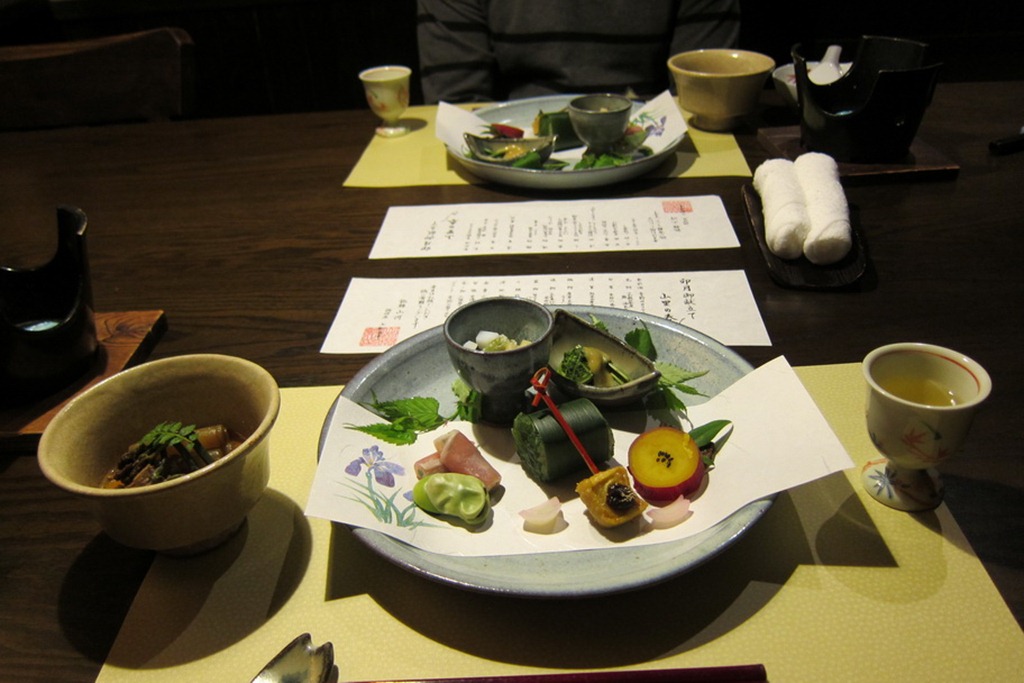 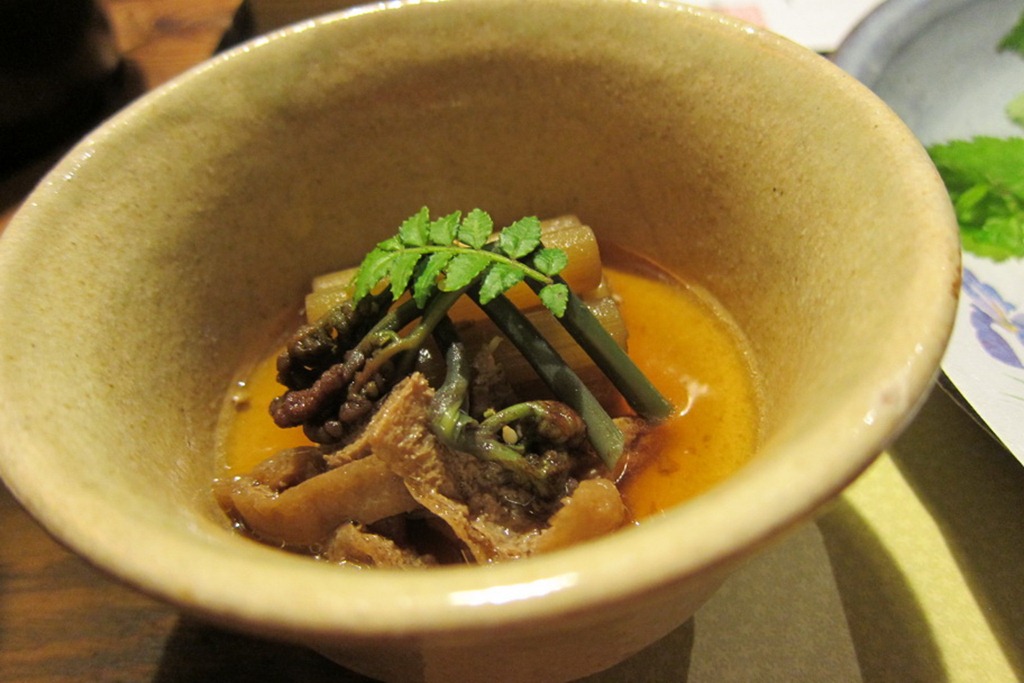 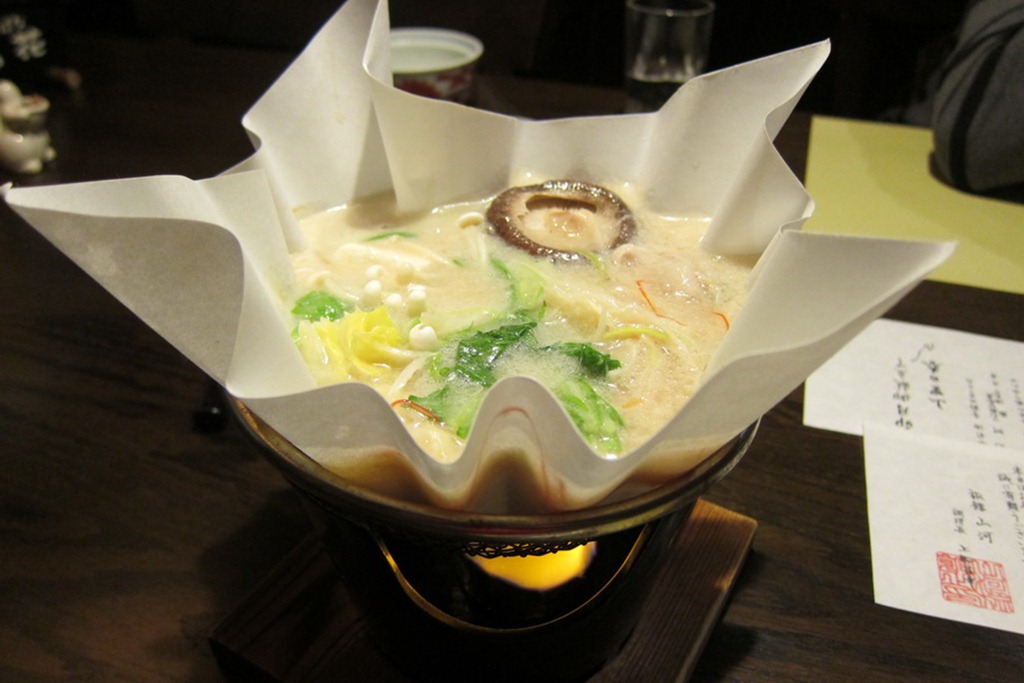 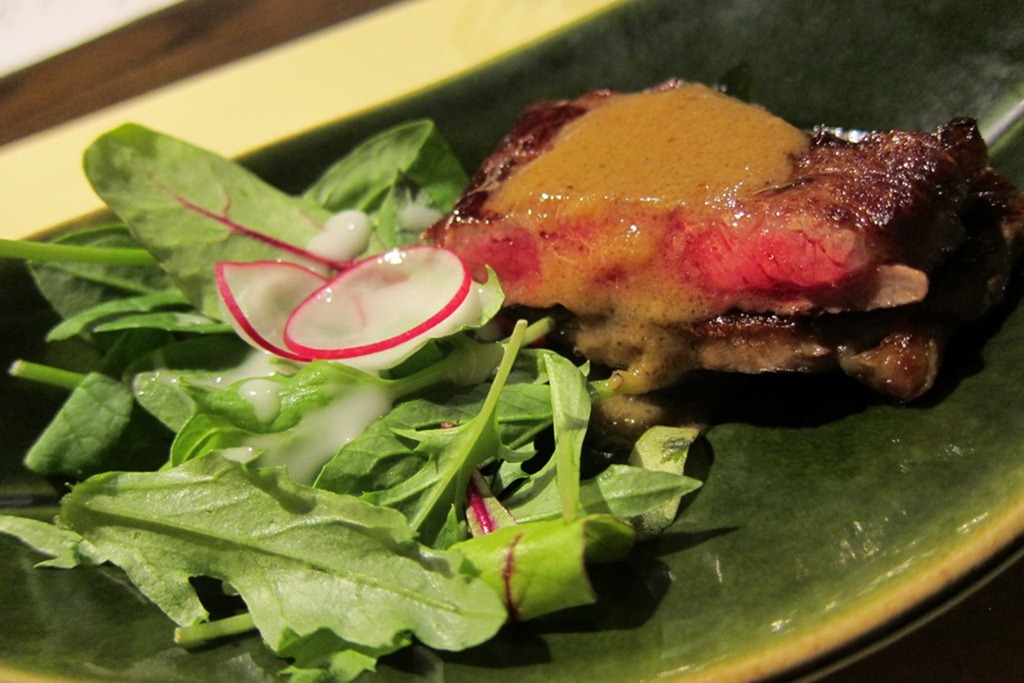 Dinner was a delicious multi-course affair each night, lasting roughly 1.5 hours.  If you’re planning on eating a kaiseki meal, be prepared for some items that may shock your western sensibilities.

In this case, the strangest thing we ate was horse sashimi, which I can only describe as gamey, and really, really chewy.  The rest of the meal was excellent, especially the fillet mignon.  It’s always hard to tell when your last course is, but we learned when they bring out the miso soup, you’ve reached the end!

Breakfast was smaller, though no less tasty and featured small pieces of fish, deliciously shaped eggs, tons of pickled vegetables, and a hearty bowl of soup.  Maybe not as filling as bacon and eggs, but quite a bit healthier! 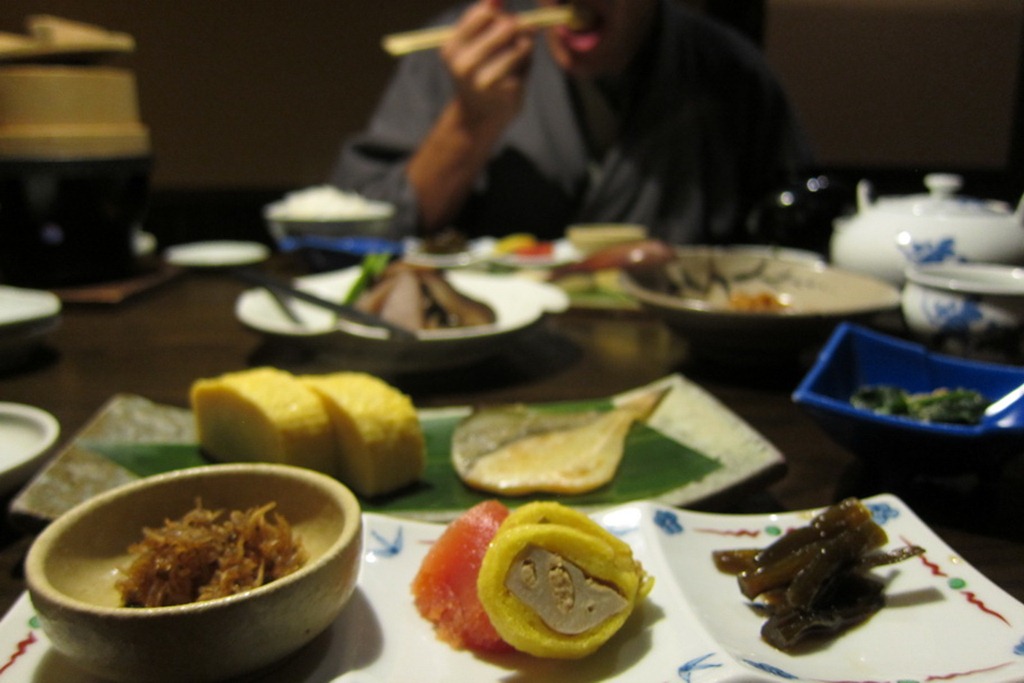 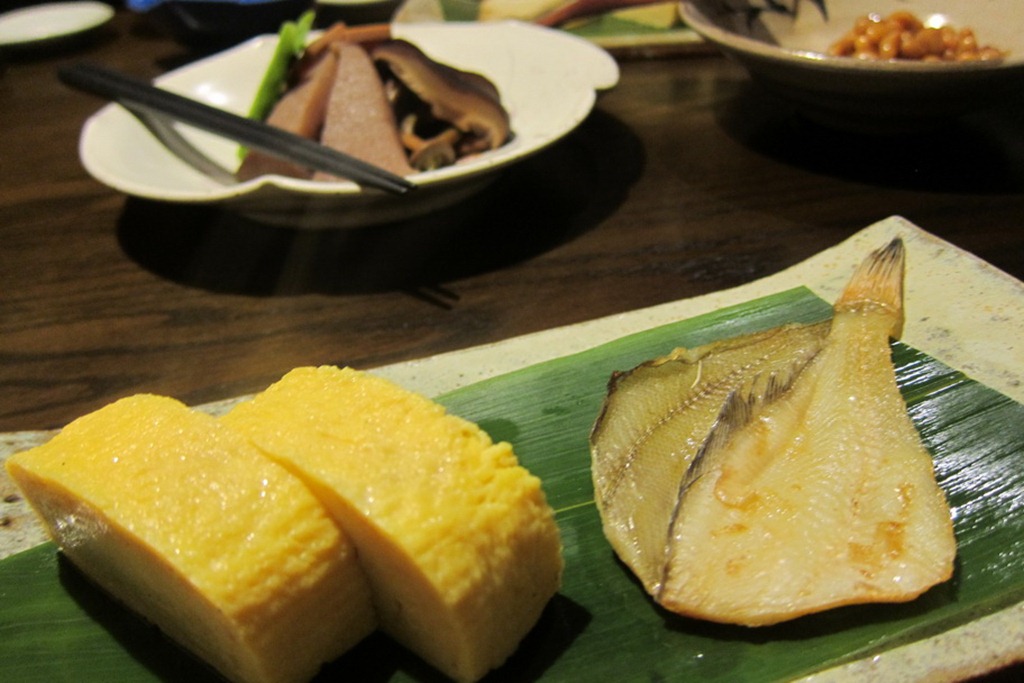 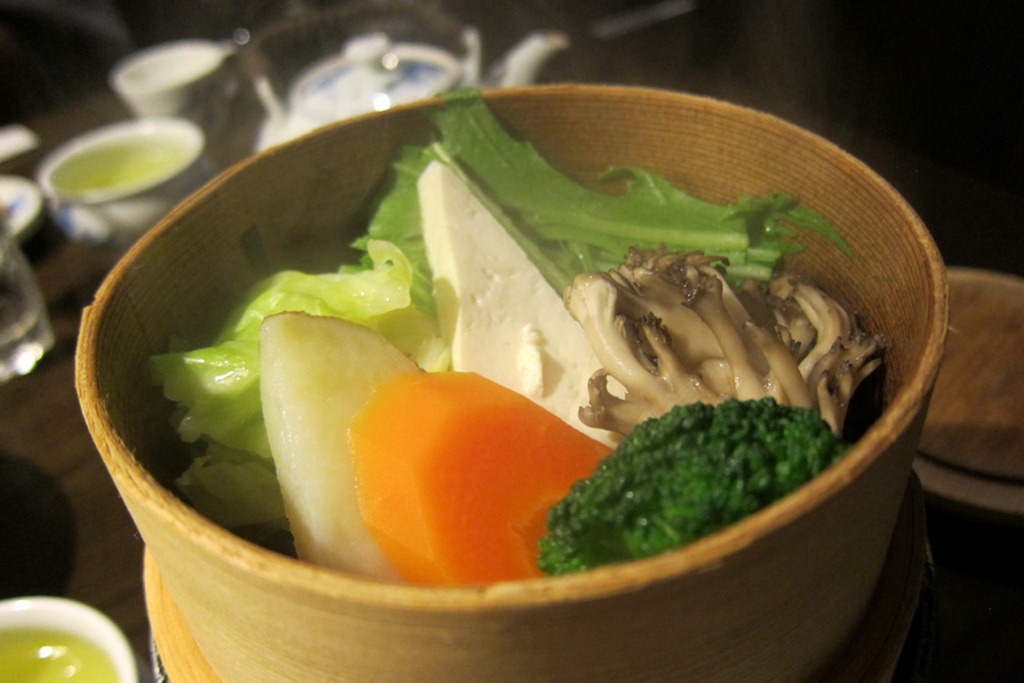 While staying in a traditional ryokan can be quite expensive, it is a truly japanese experience – from the room, to the onsen bathing, to the traditional garb, to the food. If you have the time and the money I highly recommend it.

9 thoughts on “Relaxing at Ryokan Sanga”