Since we were staying in Kyoto, Mrs. Selfish and I decided a day trip to Osaka was in order.  Osaka is only a 30 – 45 minute train ride away from Kyoto and is accessible by metro for the relatively low price of 450 yen.

Historically a commercial center, Osaka was known as “Japan’s kitchen” during the Edo period, and thus has a number of food specialties. Being a castle buff, I also really wanted to see Osaka Castle after viewing the pictures online.

After arriving in Osaka, Mrs. Selfish and I immediately sought out the Osaka Unlimited Pass, which we picked up at the train station’s information desk.  At 2000 yen (~$20) the pass gives you unlimited use of Osaka’s public transportation system, and gets you into over 28 attractions for free, and others with a heavy discount.

The pass comes with a number of tiny tickets that you tear out at each attraction, and a pass for trains/buses.  Since we planned on hitting at least 4 attractions, this ended up saving us close to $25 per person.

The first place we stopped was Osaka castle.  Osaka castle sits in the middle of the city, within a large moat which is a major contrast to the gleaming skyscrapers surrounding it.

The castle played a large part in the unification of Japan.  The current version is a concrete reconstruction of the original, but you really can’t tell that from afar. 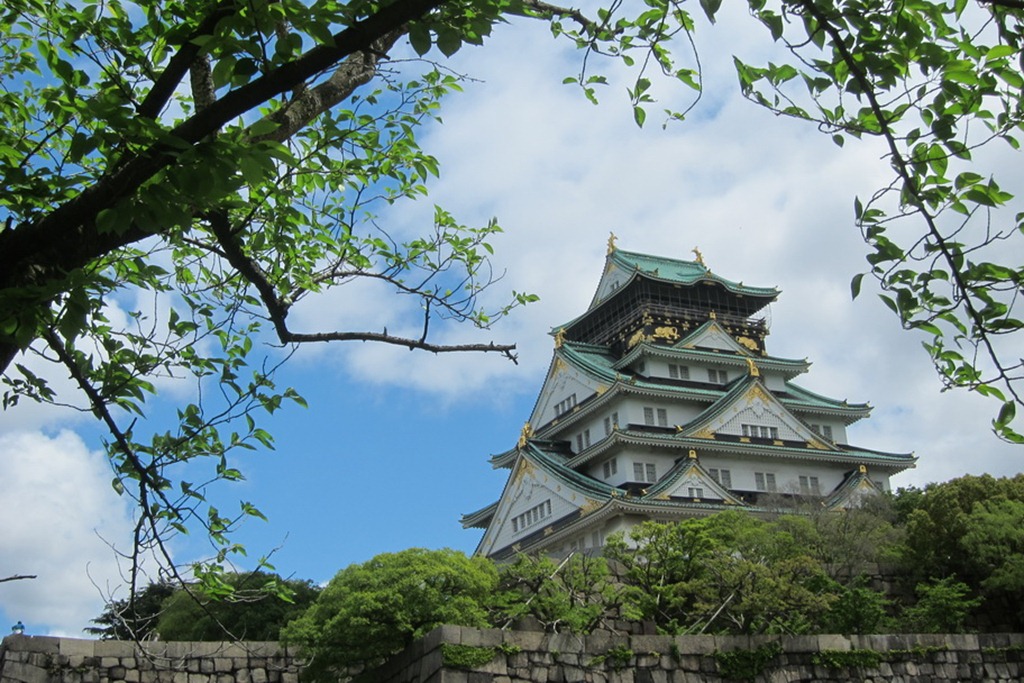 The inside of the castle is a little bit of a let down.  I was hoping to see historically recreated rooms and such, but you end up taking an elevator up to the top for the city views (which are so-so), and then wander the other floors which are a museum of the castle itself.  The castle’s history is pretty interesting, however, and they have description in English.  Some of the scenes are even acted out by little 3d hologram movies.

Next, Mrs. Selfish and I headed to Okonomi Chibo, an eatery specializing in one of Osaka’s local specialities, Okonomi-Yaki.

Okonomi-Yaki is a kind of pancake stuffed with cabbage, meat, shrimp, eggs, and any number of ingredients.  It’s topped with a “special sauce,” mayo, bonita flakes (dried fish shavings), and aonomi (finely grated seaweed) . The batter is prepared ahead of time and partially cooked, then delivered to your table where you finish the job on your own grill.

The Okonomi-Yaki had great texture – crispy on the bottom, but gooey on top.  Unfortunately the special sauce tastes like molasses mixed with ketchup and lemon juice – cloyingly sweet with a double punch of tangy-ness. The mayo brought an interesting savory flavor, with the bonita flakes bringing a heavy touch of FISH into the mess.  When mixed with rice, however, the Okonomi-Yaki was excellent.

After lunch we headed over to the Umeda Sky Building, home to the Floating Garden Observatory. I don’t know exactly what I was expecting.  Was it a garden at the top of a building, similar to the Marina Bay Sands in Singapore? An observatory where one could view the stars? 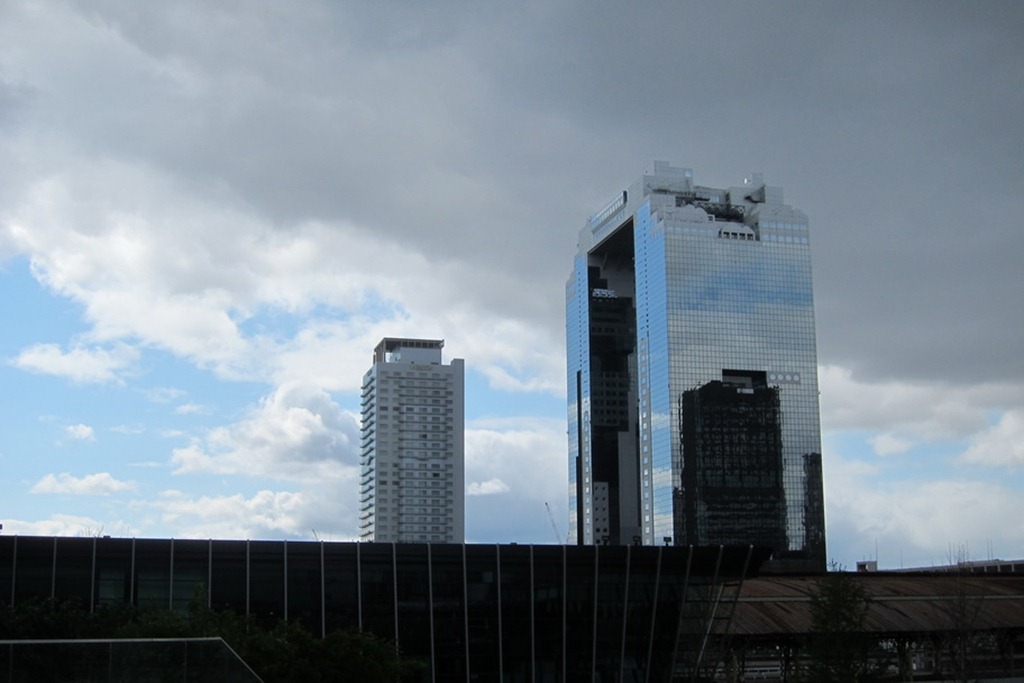 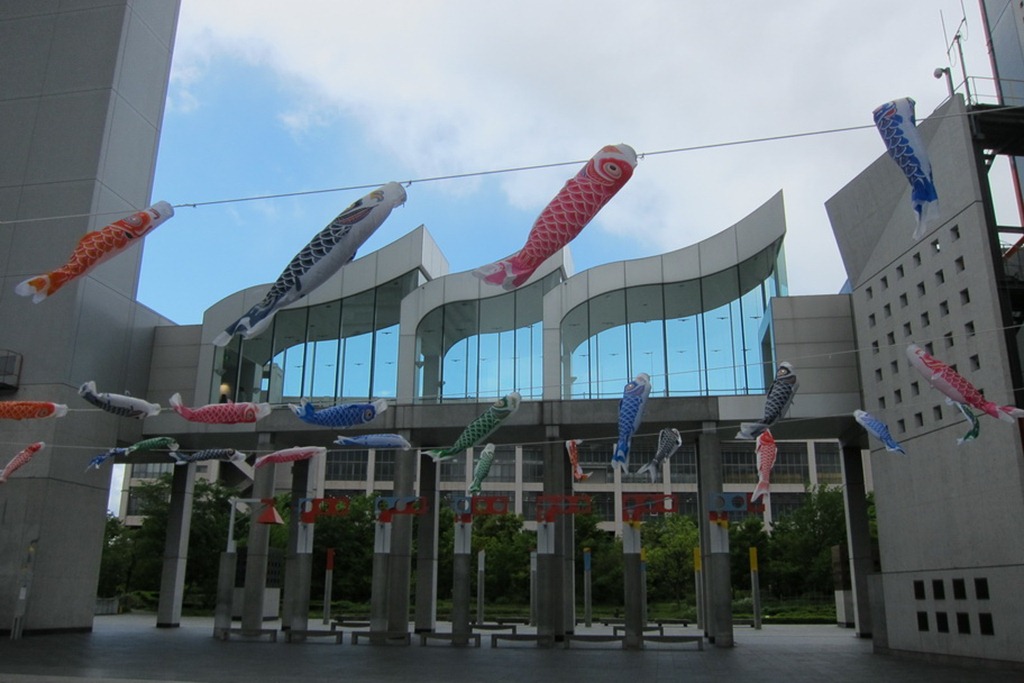 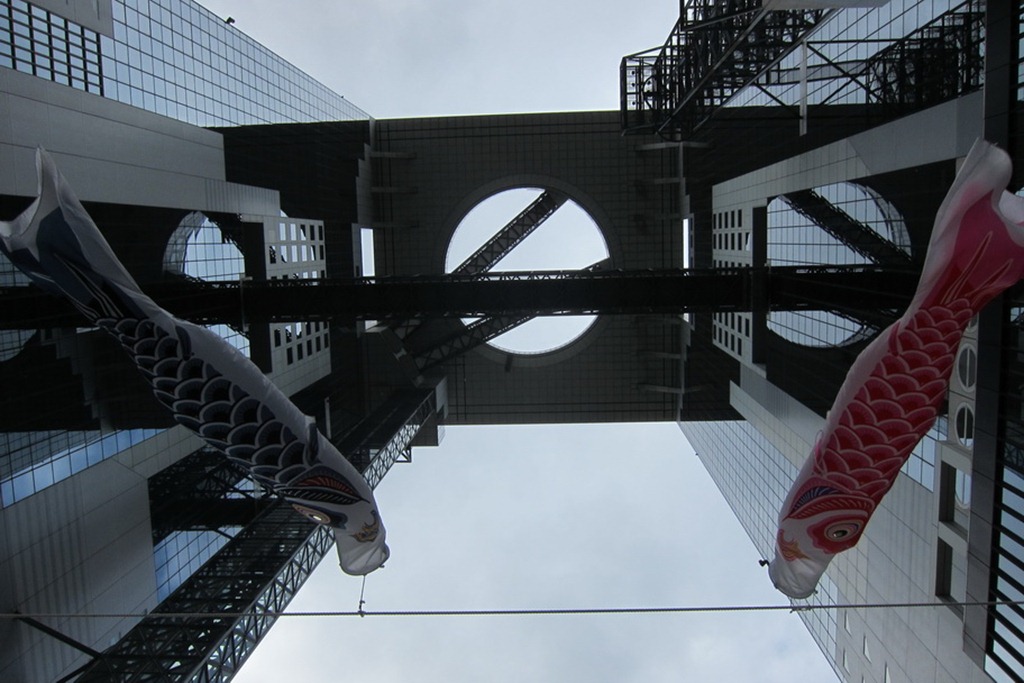 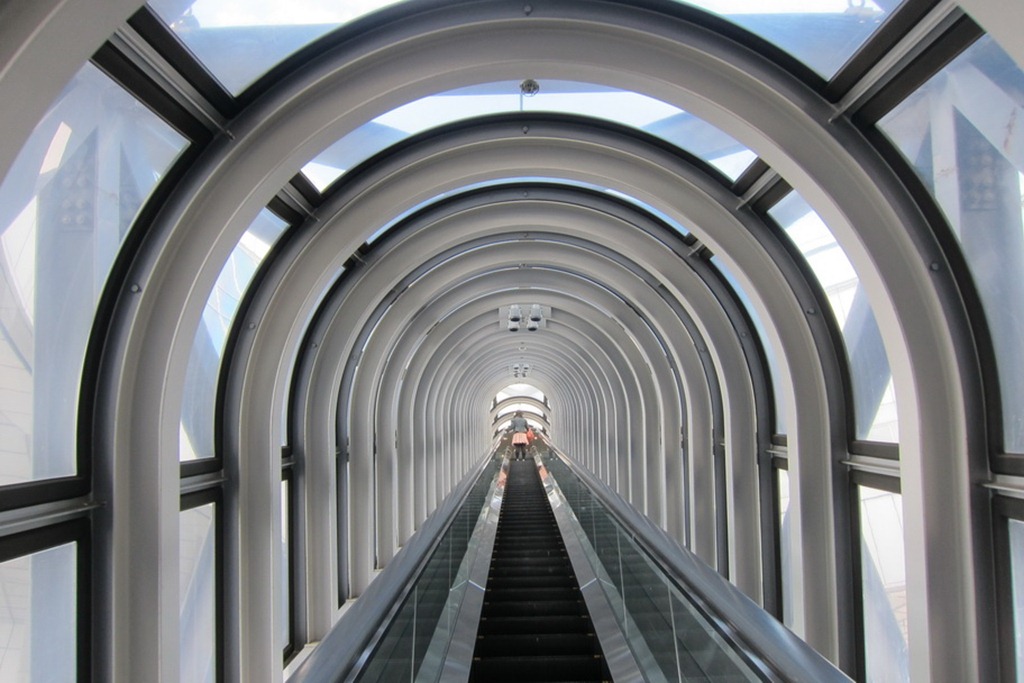 Turns out it was neither – fortunately the Skyline Garden Observatory does have nice views of Osaka, so if you’re into city skyline views the they got you covered.  While I was happy that we got to see it, I was happier that the 600 – 700 yen cost of admission was covered by the Osaka Unlimited Pass. 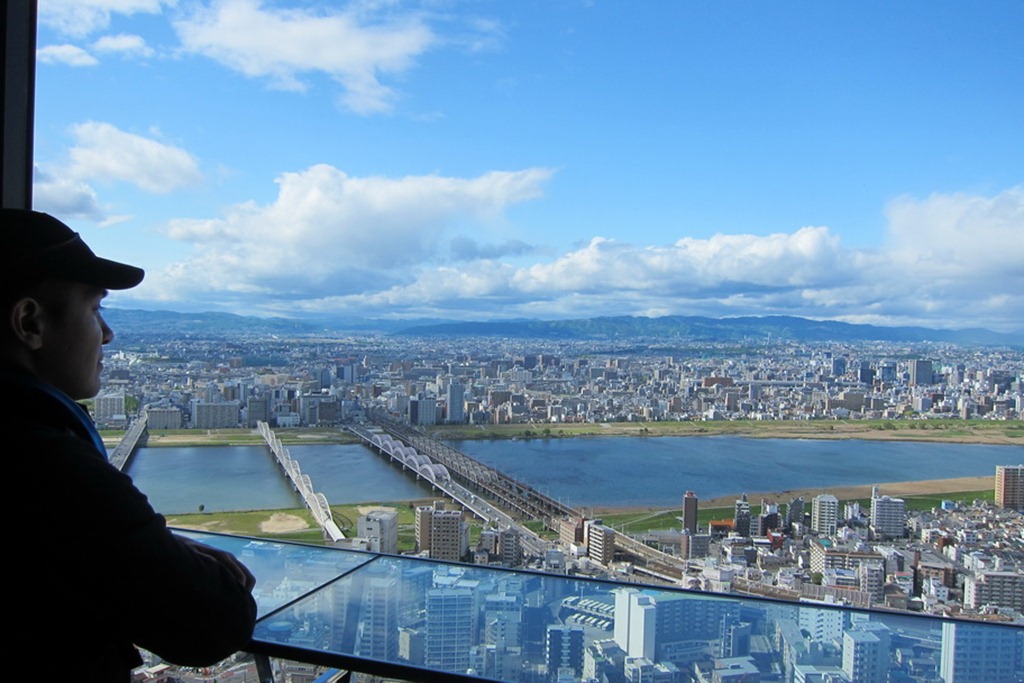 Next we headed to the HEP Five Ferris Wheel, which was only a short walk from the Sky Garden.  HEP Five is a trendy shopping mall, filled with brand name designers and local stores alike.

At the 7th floor we boarded the Ferris Wheel, for more skyline views. Each Ferris Wheel had its own iOS docking station, so we took the chance to listen to some Michael Buble as we took in the sites.

After finishing with the Ferris Wheel it was time for dinner, so we jumped on the metro and headed over to Dotonbori Street, one of Osaka’s main eating streets. 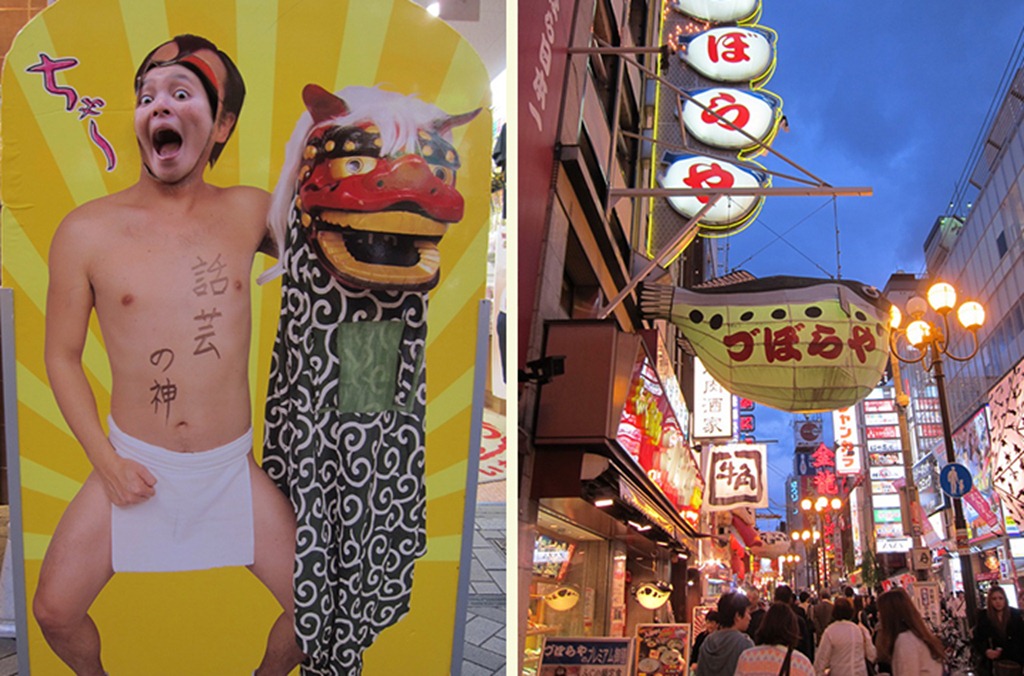 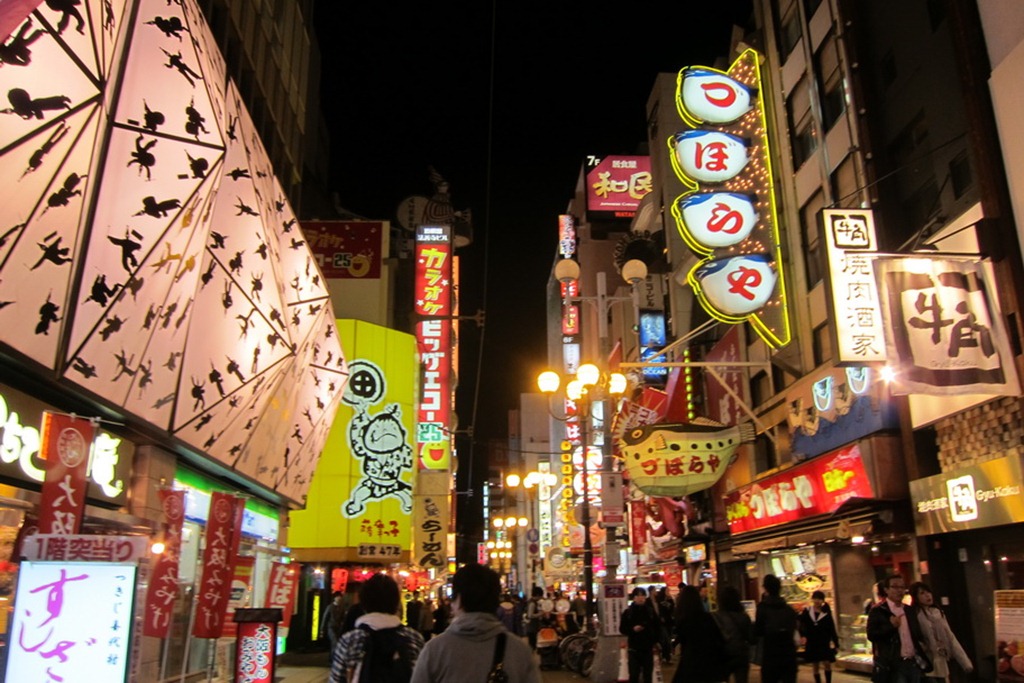 Here we decided to give Tako-yaki a second-chance. Tako-yaki are little fried bits of dough stuffed with pieces of octopus, and topped with Osaka’s special sauce, mayo, and bonita flakes.

Mrs. Selfish first tried them in Kyoto during our previous trip.  I didn’t get the chance, because after one bite she threw the lot out.  The octopus at this particular eatery was tender and moist, and gave nicely when I bit into them.

Unfortunately, the outside was not properly fried, and became soggy after sitting in the sauce for 30 seconds.  The flavor of the sauce was very similar to the Okonomi-Yaki, and overpowers the dish, for better or worse.

We also tried the Kushi-Katsu, which is a different style of deep fried food found in Osaka.

Basically they fry everything on a stick in the same delicious batter. The batter is somewhere in between tempura and your usual katsu batter. It’s light, it’s salty, it’s delicious.

To close out the evening we headed over to Tsūtenkaku Tower.  Originally built in 1912, it was the tallest building in Asia. During World War 2, it was scrapped for its steel, and was reconstructed in the 50’s.  Now it’s a chintzy building filled with good-luck idols, and a pocky store. 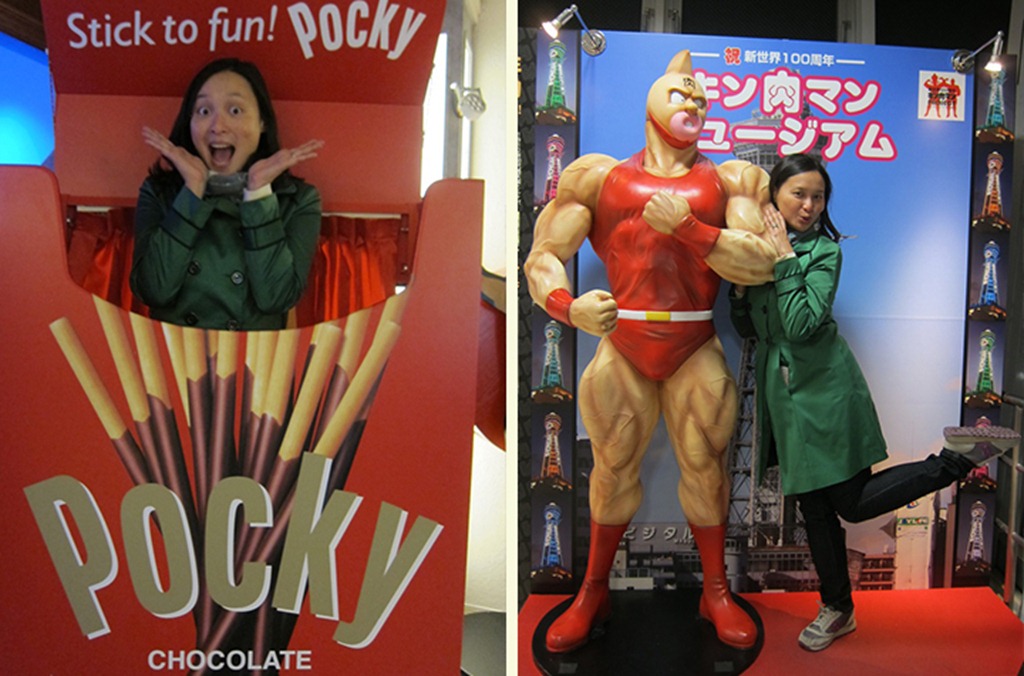 Last we ended the night at Spa World, a bath house with multi-themed rooms. After our onsen hopping days in Kurokawa, Mrs. Selfish and I were looking forward to a good soak – and boy does Spa World deliver!

Each gender gets a separate floor, and each floor is themed as either Asian or European locations.  We couldn’t take any pictures once we got inside, but if you’re into onsen it’s well worth the trip. 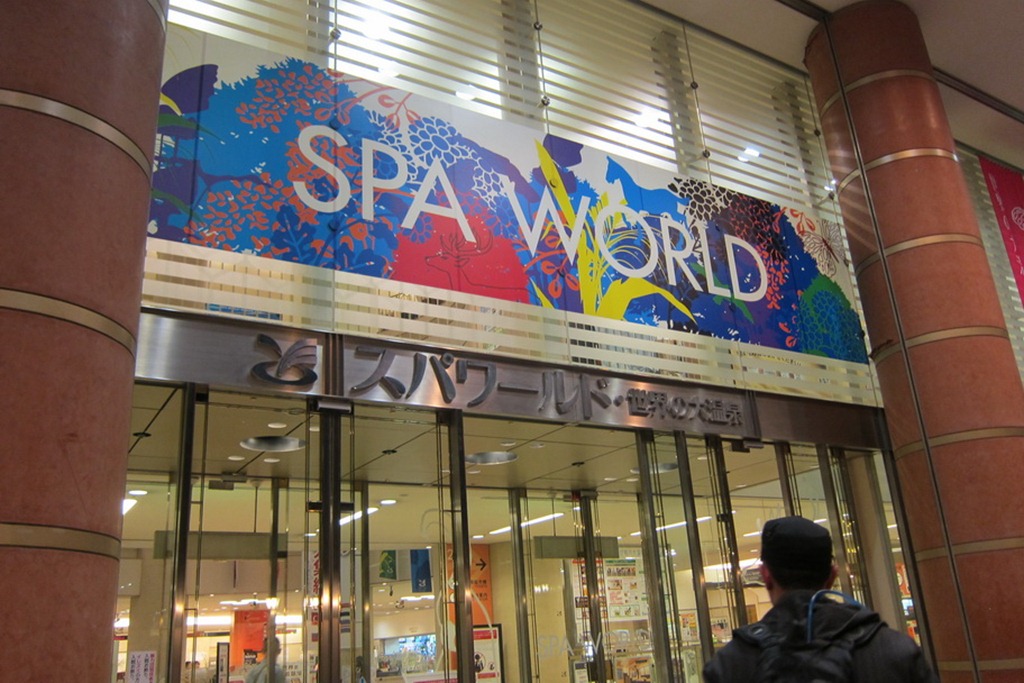 All and all we had an excellent day in Osaka, spending roughly 11 hours from start to finish.  If you’re planning on hitting the sites, I would definitely recommend the Osaka Unlimited Pass.  We probably saved about $25 a piece.