For our last five nights in Japan I booked us at the mother of all hotel redemptions – the Park Hyatt Tokyo. Famously shown in “Lost in Translation,” the Park Hyatt Tokyo has become a point-collector’s dream redemption: a luxury hotel in the middle of Tokyo, with killer food, killer views, and a killer price tag. 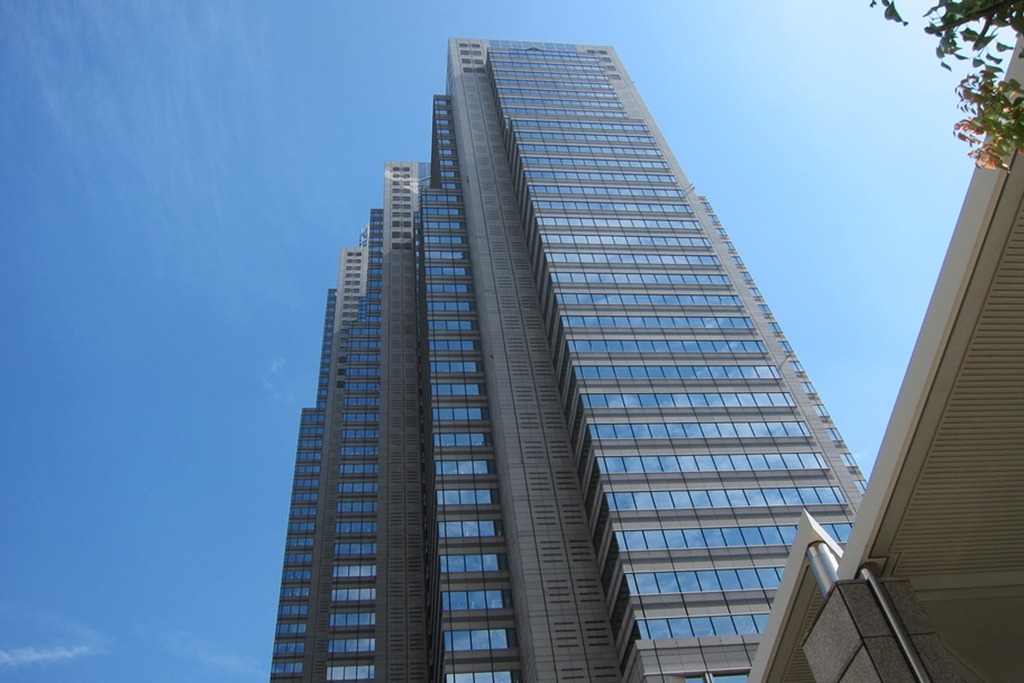 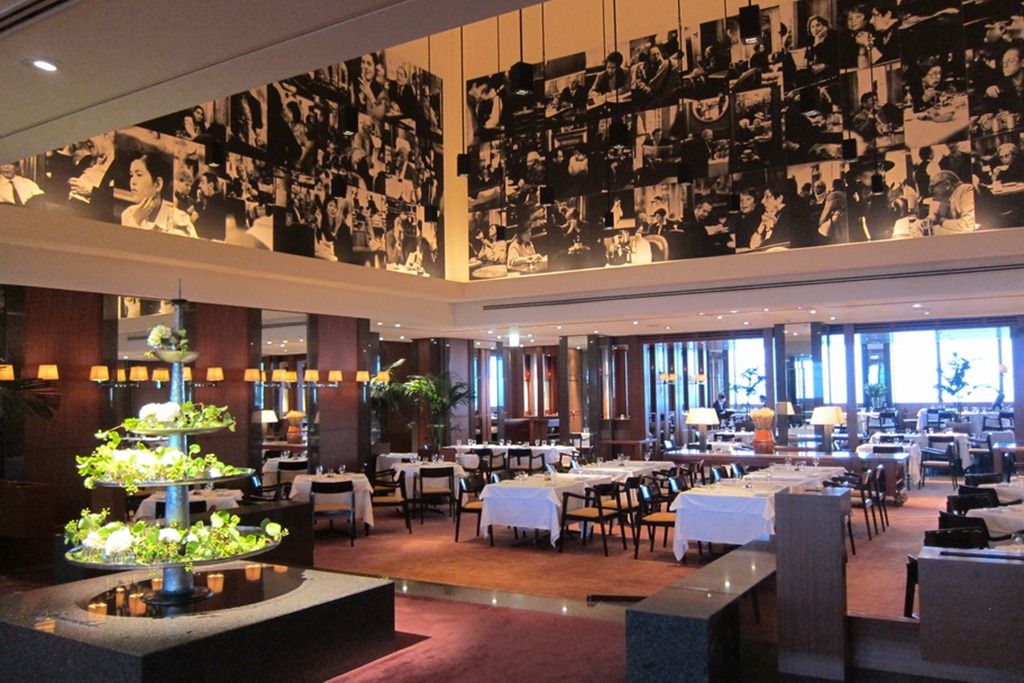 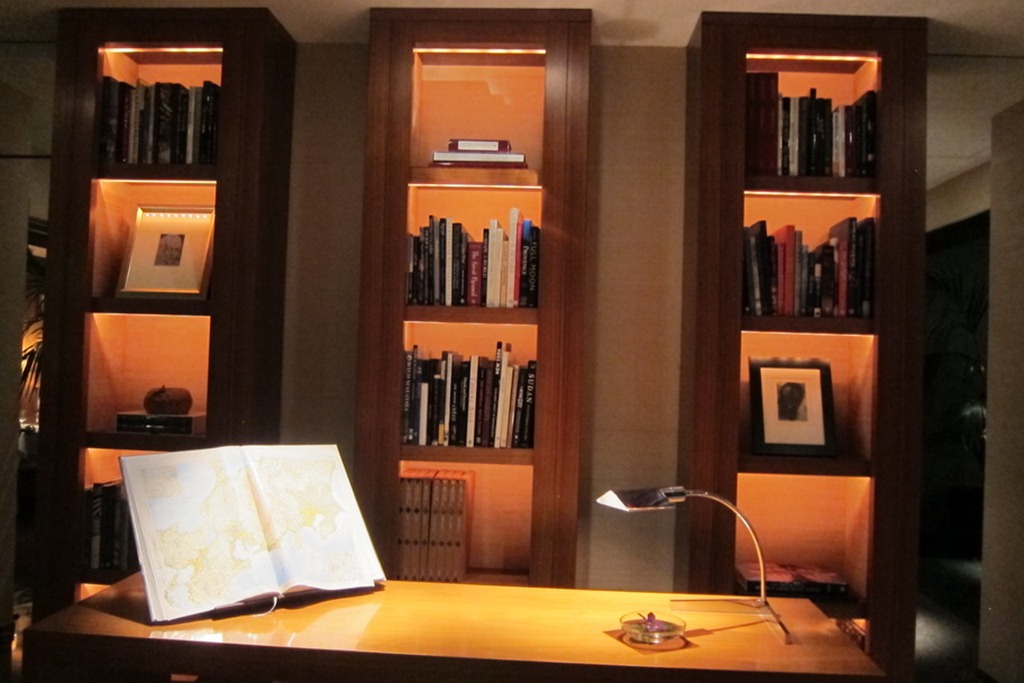 Getting there & Booking the Award

Since Mrs. Selfish and I were staying in an airbnb apartment in Shibuya, so we ended up taking a cab for a little over 800 yen. Transportation to and from Narita airport is simple, however. Simply take the Airport Limousine for 3000 (~$30) yen per direction. 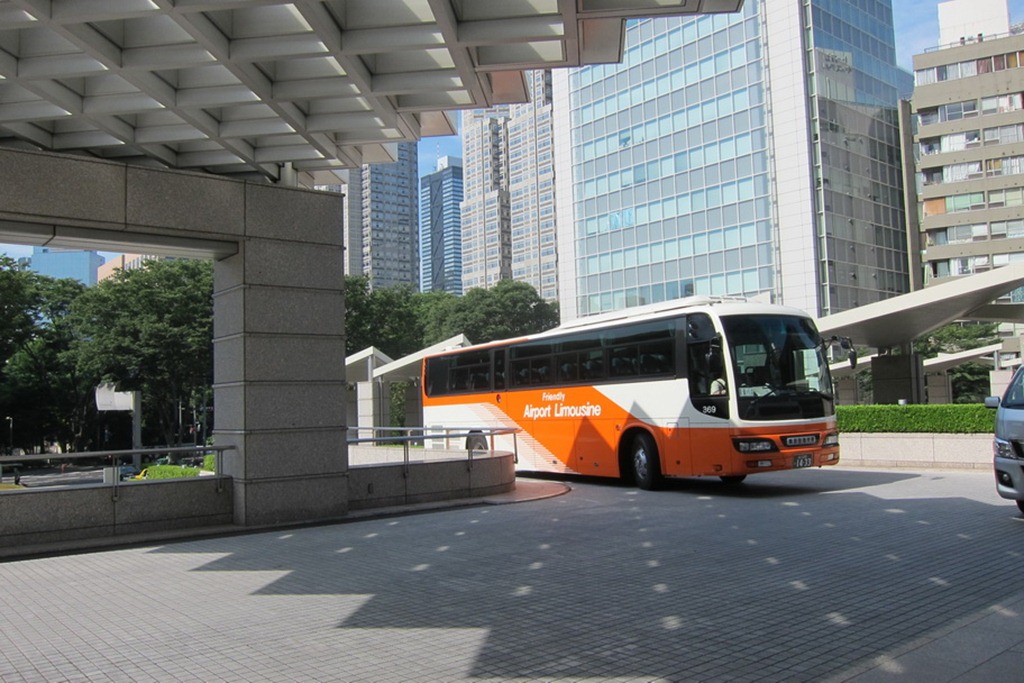 For the award itself, Mrs. Selfish and I each applied for the Chase Hyatt card, which gave us each 2 nights at any Hyatt property in the world after first purchase. The last night I booked using 22,000 Hyatt points, which I transferred over from our Chase Ultimate Rewards stash.

Since Mrs. Selfish had temporary diamond member status thanks to a Hyatt Diamond Trial Challenge which she started before we stayed at the Grand Hyatt Fukouka, I added her name to my reservation and vice versa, then contacted the hotel to request they combine all three reservations into one. As a diamond member, the Park Hyatt Tokyo offers some specially amenities including:

Check-in and the Room

After entering the hotel we made our way to the lobby, which is located on the 41st floor and were escorted to the diamond desk, where we were taken to our room on the 48th floor for the check-in process.

After a dozen or so award redemptions, I’ve gotten in the habit of asking for upgrades upon arrival, but this was next to impossible to do since we were standing in our room during the check-in process! Fortunately, I had emailed the hotel ahead of time to request an upgrade to a deluxe room facing Mt. Fuji. 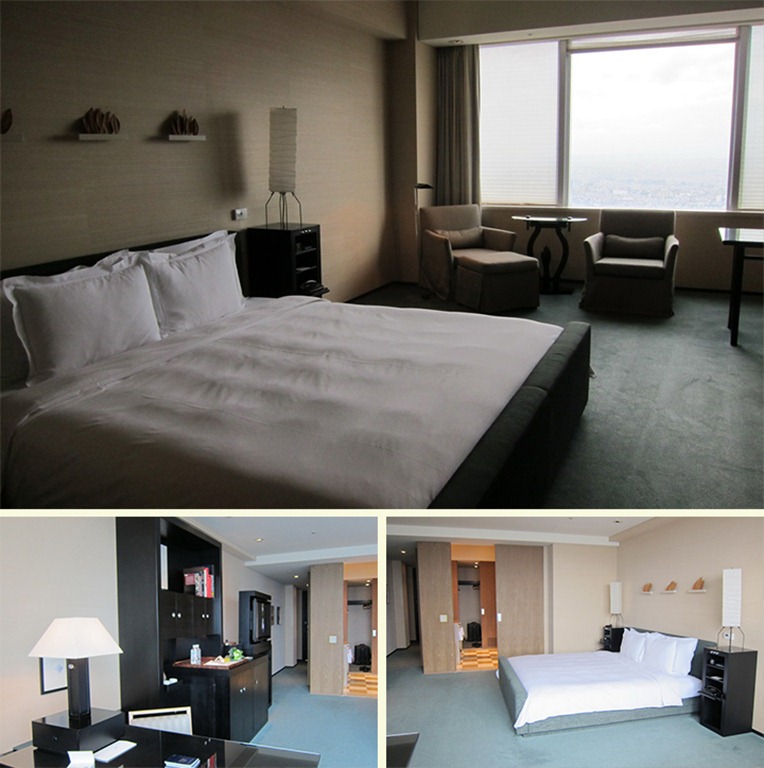 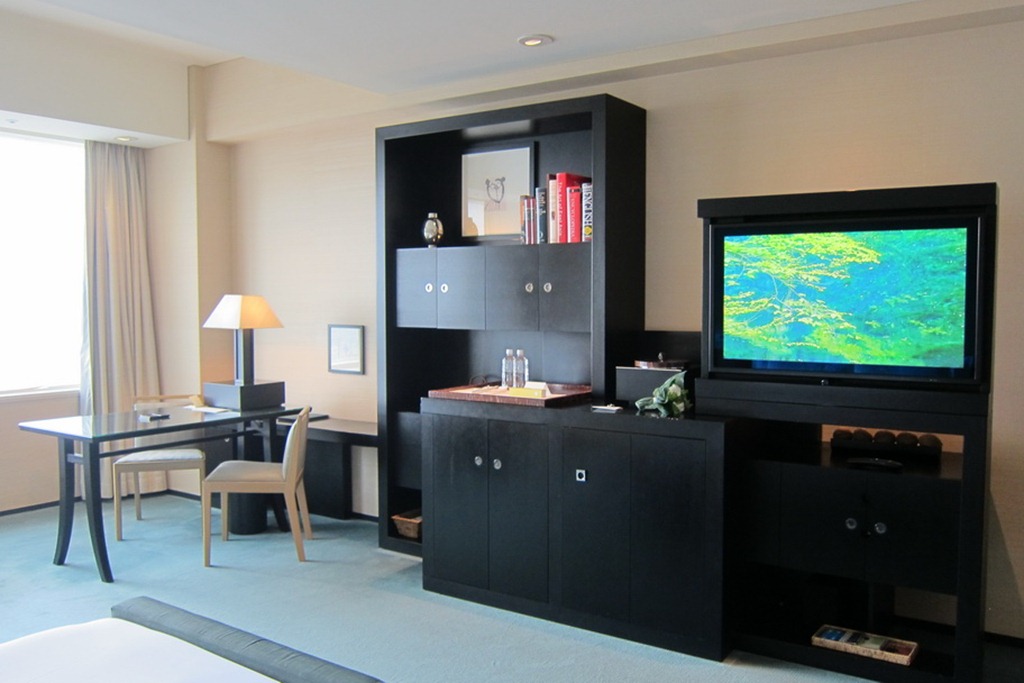 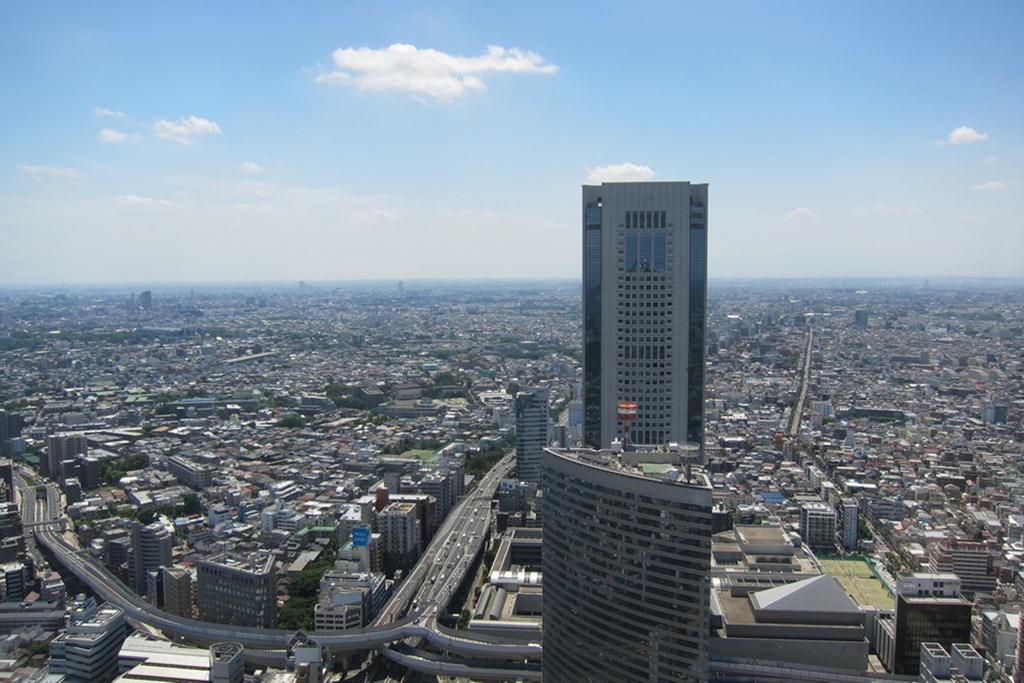 That tiny looking cloud to the right of the building is actually Mt. Fuji!

The room was pretty standard, albeit a lot larger than most Japanese hotel rooms. The king-sized bed was very comfortable (though not as good as the Westin’s Heavenly Bed).

The desk area was perfect for Mrs. Selfish and I to get some work done, as well – though I was disappointed to find we couldn’t connect our laptops to the TV & sound system like we could in the JW Hong Kong or JW Beijing.

The bathroom was pretty slick, however, with a roomy bathtub, waterfall style shower, Toto toilet, and a separate areas for Mrs. Selfish to do her hair and apply makeup. The amenities kit was generous as well, with all of the standard bathroom accoutrements provided by Aesop. 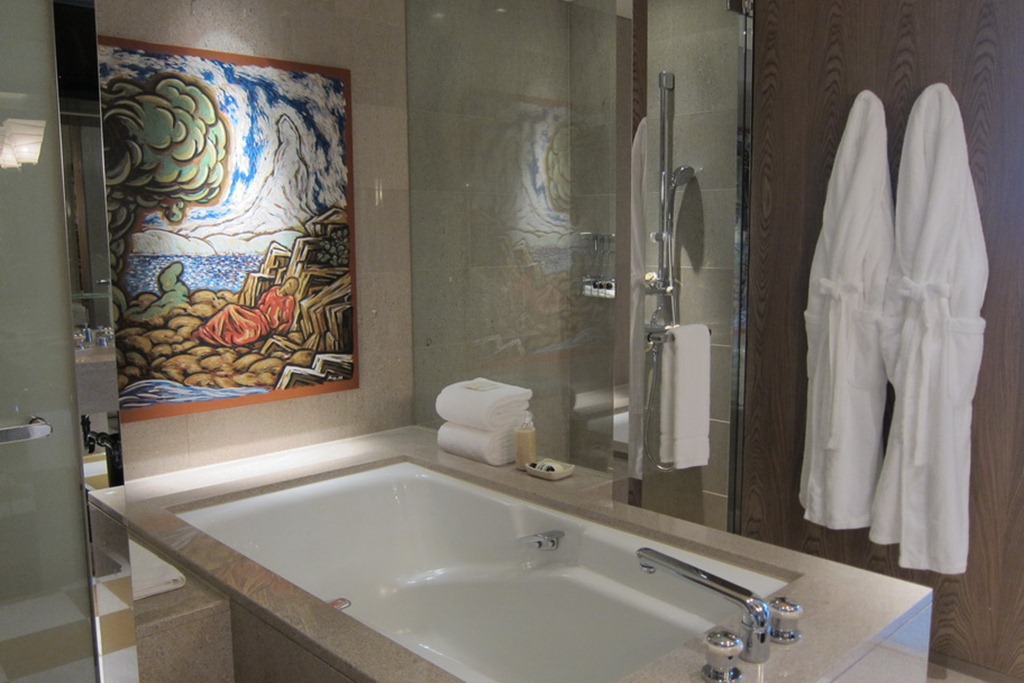 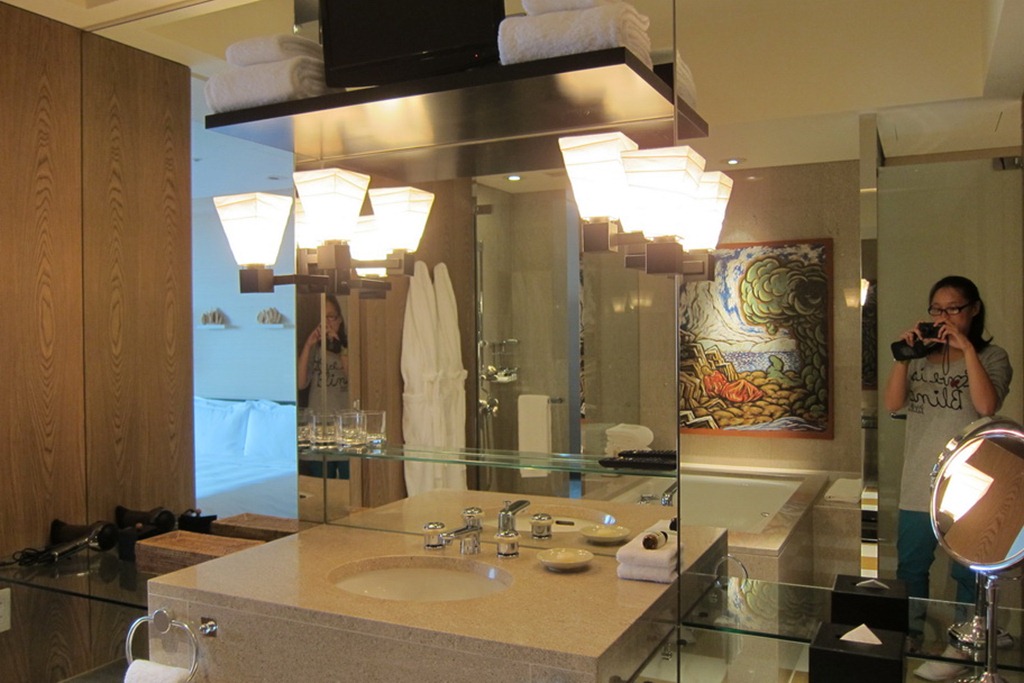 We were also impressed by the welcome gift, which was a bottle of wine, a bottle of champagne (since we were celebrating a special occasion), and a lemon poppy cake provided by the Park Hyatt’s bakery on the 2nd floor. The cake was easily the best gift I’ve ever received from a hotel and better than many bakery cakes – the Japanese really know how to do pastries! 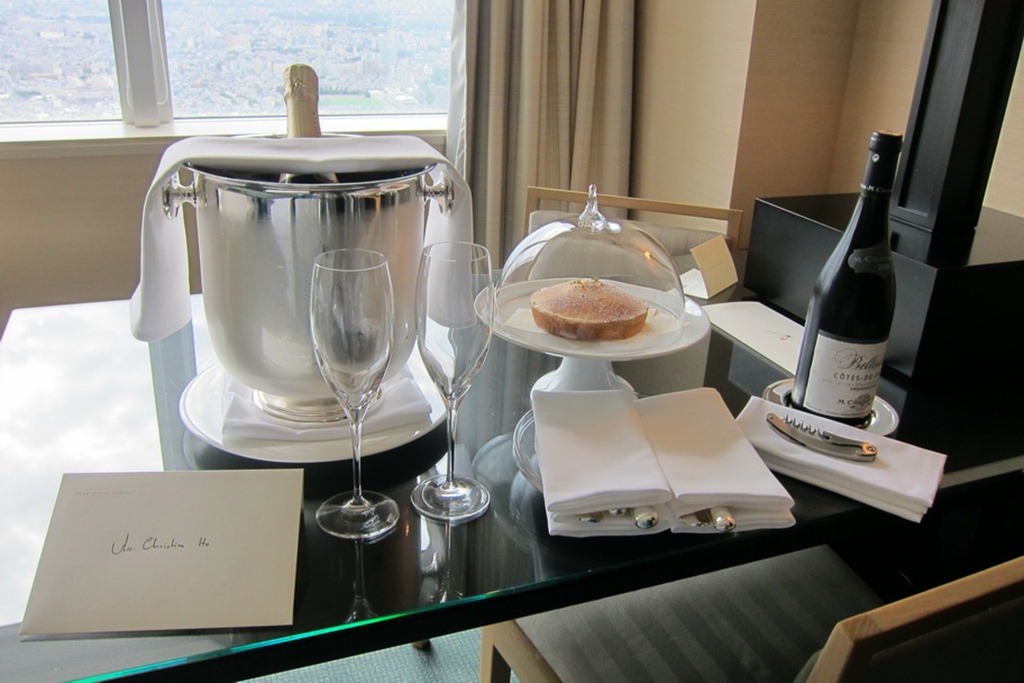 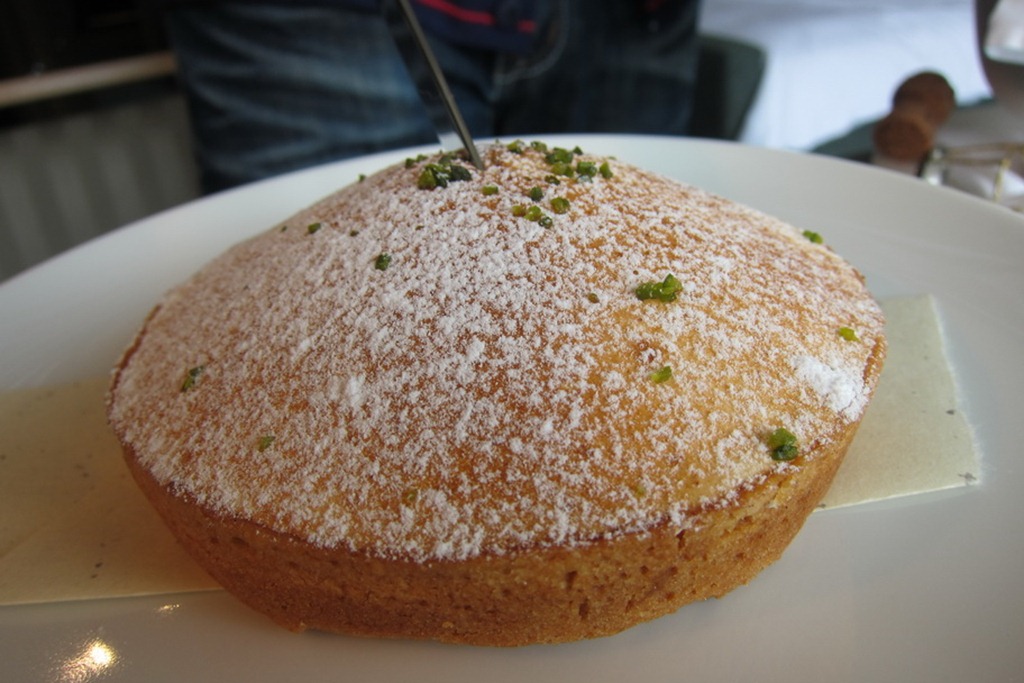 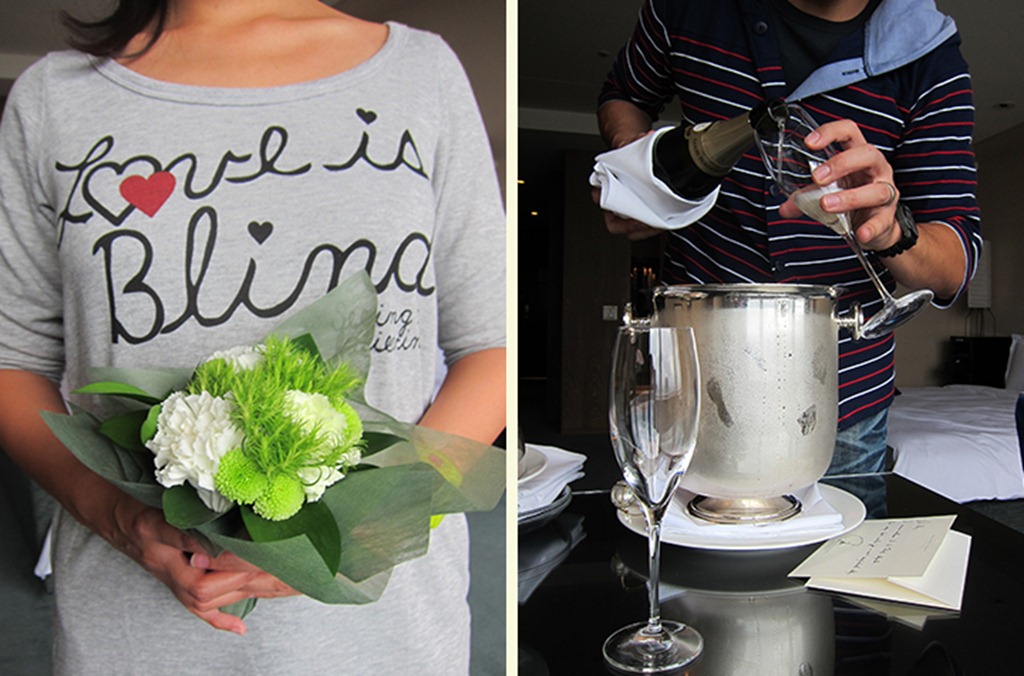 After check-in, Mrs. Selfish and I made our way to the New York bar for the Diamond Happy Hour. Happy hour runs from 5pm – 7pm every night and gives diamond members a choice of champagne, red wine, white wine, or draft Asahi. 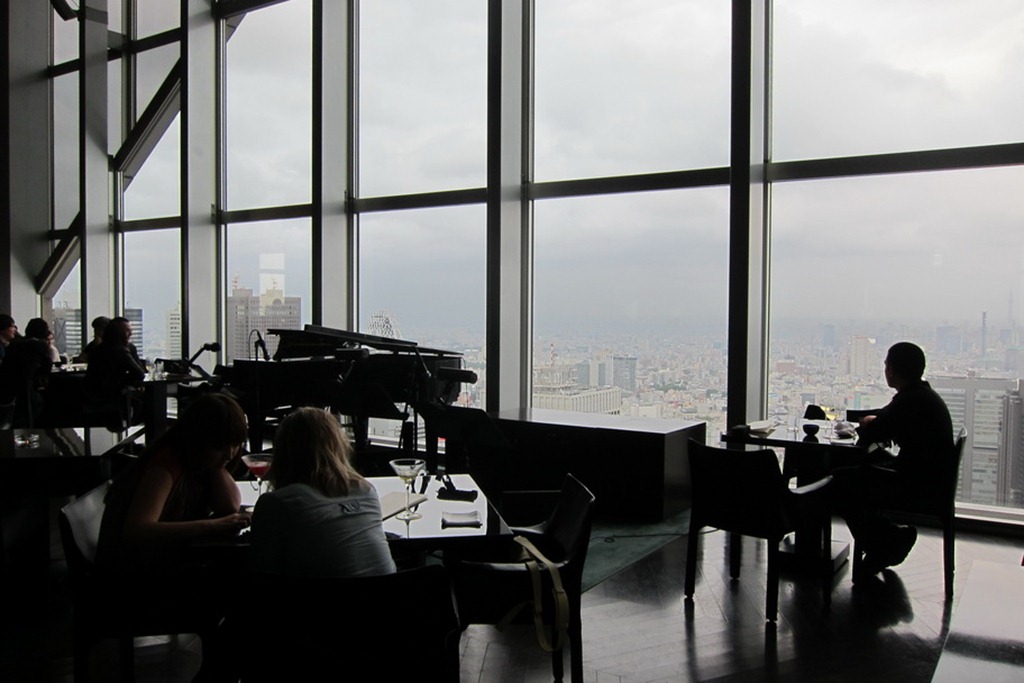 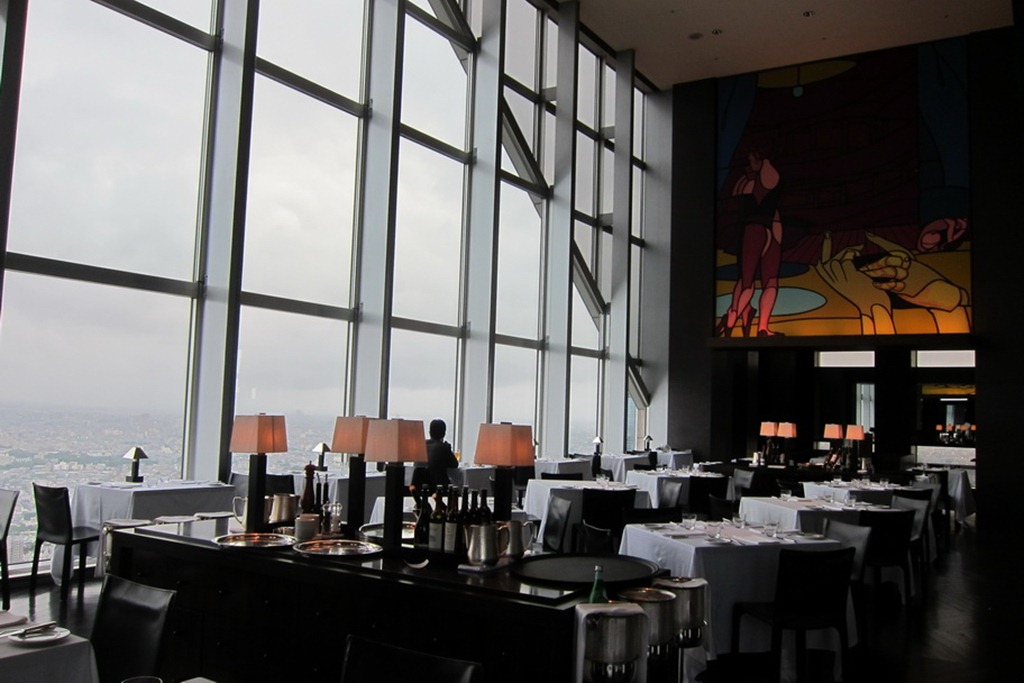 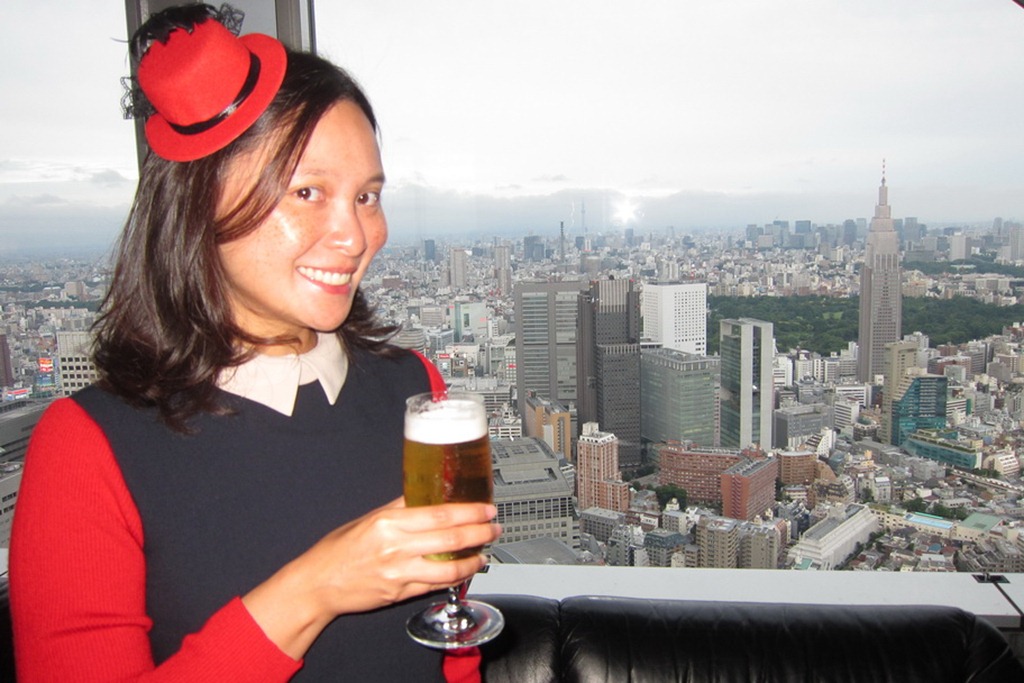 The views from the bar are truly majestic, and Mrs. Selfish and I came back as many nights as we could (mostly for the view, I assure you – cough, cough).

Since the NY Bar’s live jazz didn’t start until 8pm, we decided to grab a few bites to eat, including the Crispy Duck Fat Potato Fries, and the Brick Oven Pizza, which was topped with Chorizo. Both were excellent, albeit slightly expensive at a total of 3900 yen.

The jazz was excellent, and did not disappoint. The band members were even real imported Americans! 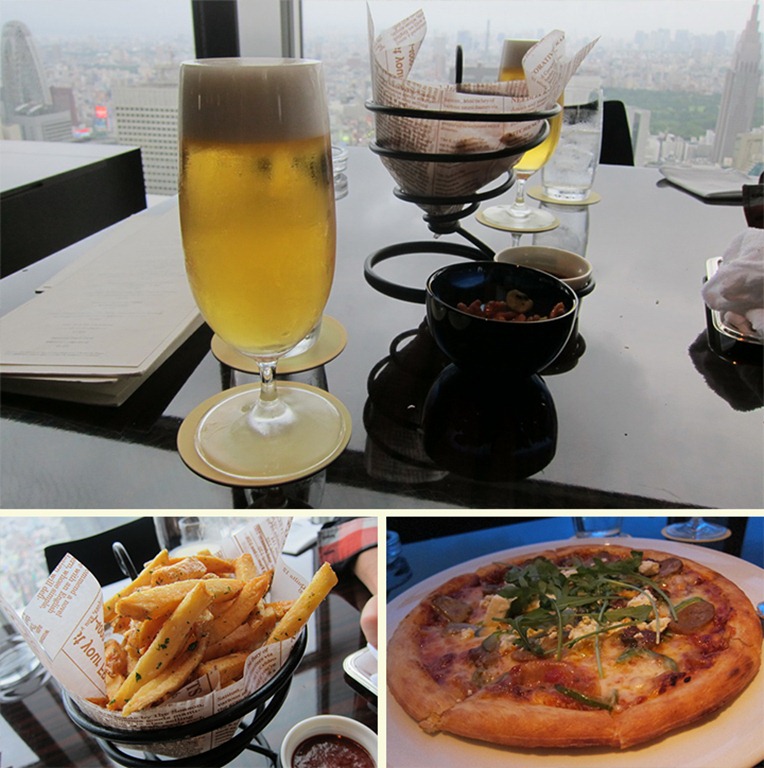 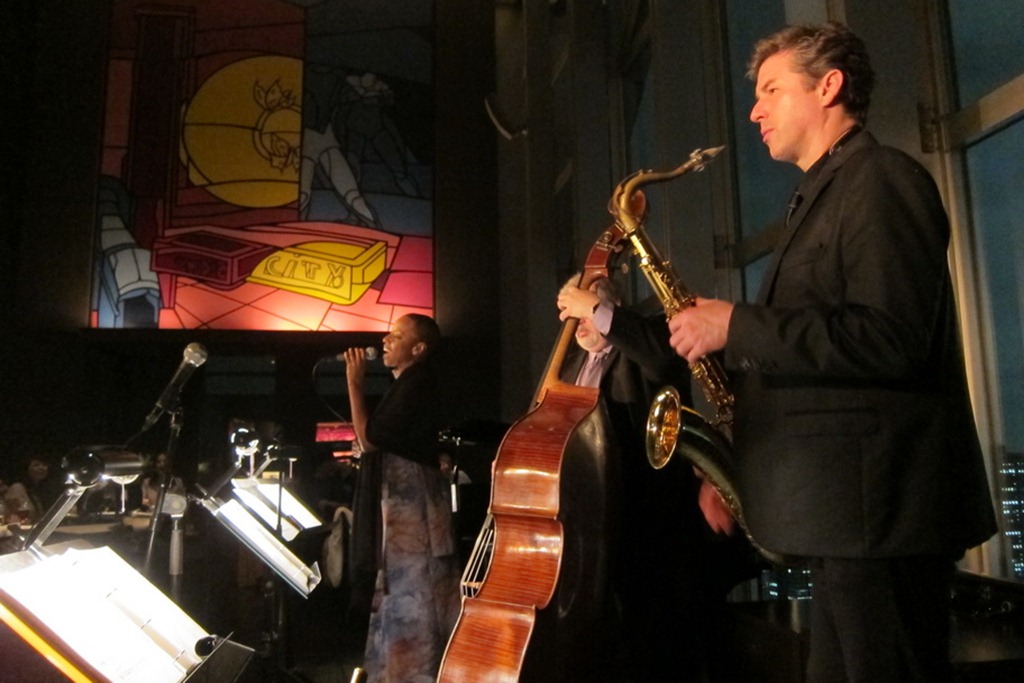 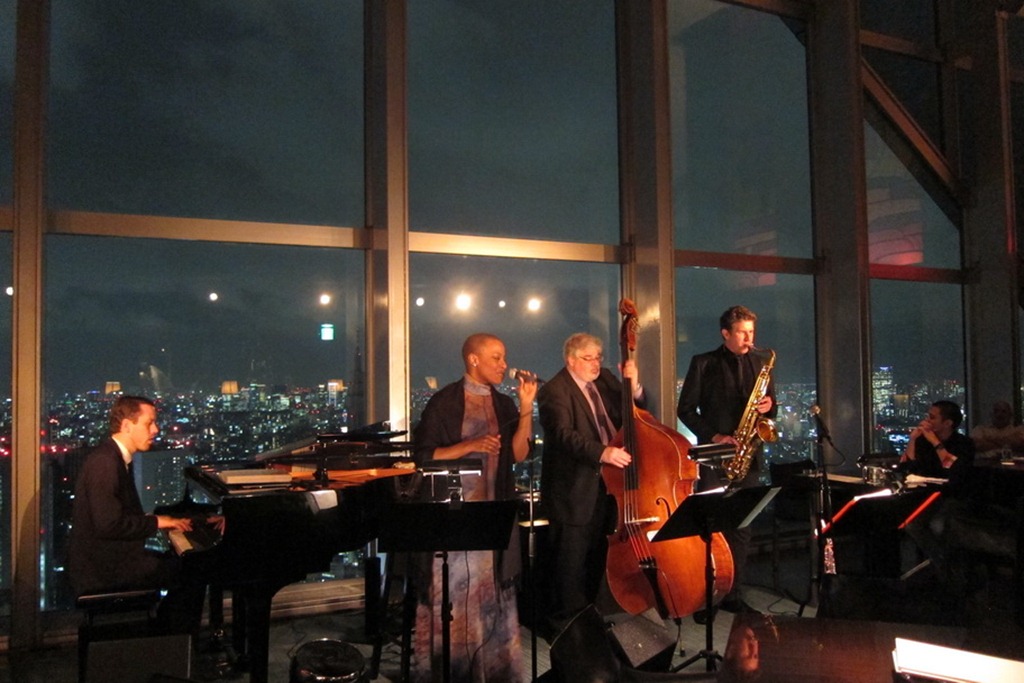 The Gym and Spa – The Club on the Park

Somehow, despite all the sleeping and drinking, Mrs. Selfish and I even made it to the gym. 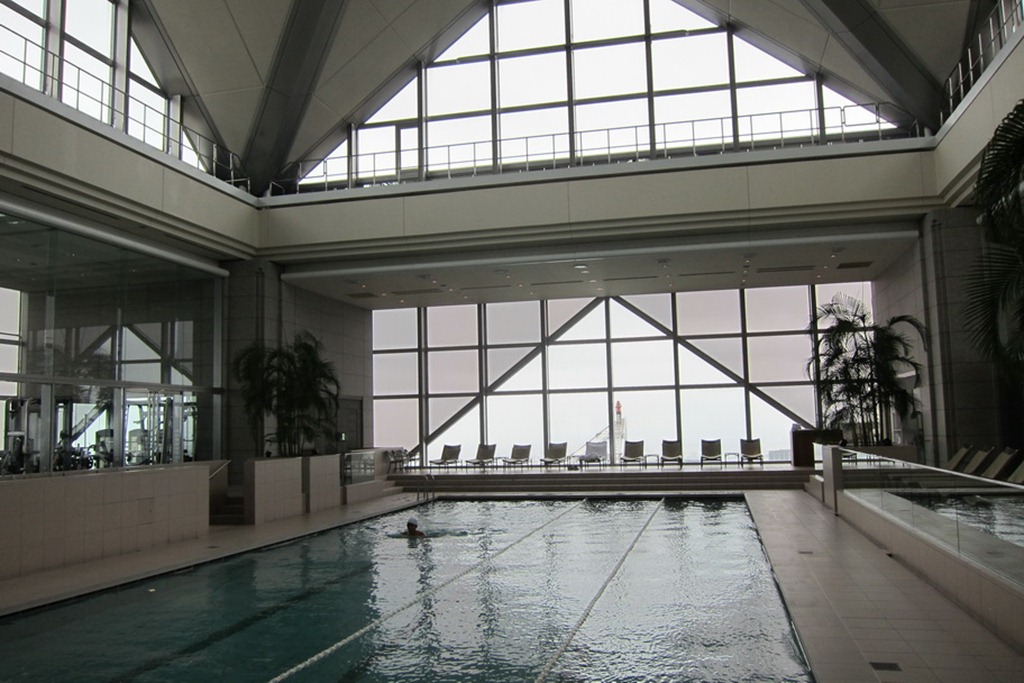 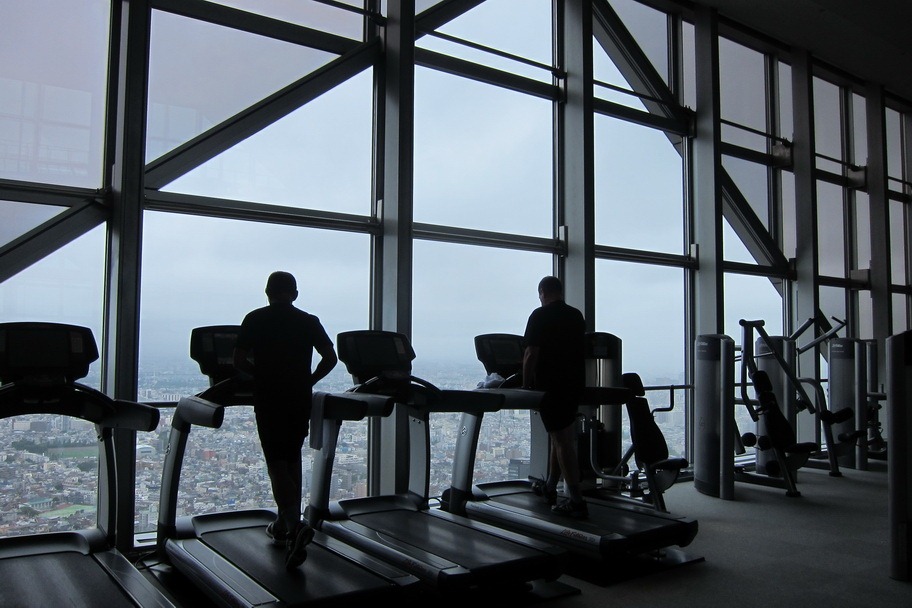 Working out on the 45th floor feels like you’re working out at the top of the world. I managed to catch a swim (during an aquaerobics class, à la Lost in Translation), and we even caught a yoga class, which was entirely in Japanese.

The best part about the “Club on the Park,” however, was the spa, which was delightfully Japanese. The spa has separate male and female areas for soaking in a hot tub, or sweating in the sauna – which came in 3 temperatures: hot, really hot, and ridiculously, unbelievably hot. It also had a cold plunge pool. It felt very much like our own modern onsen. 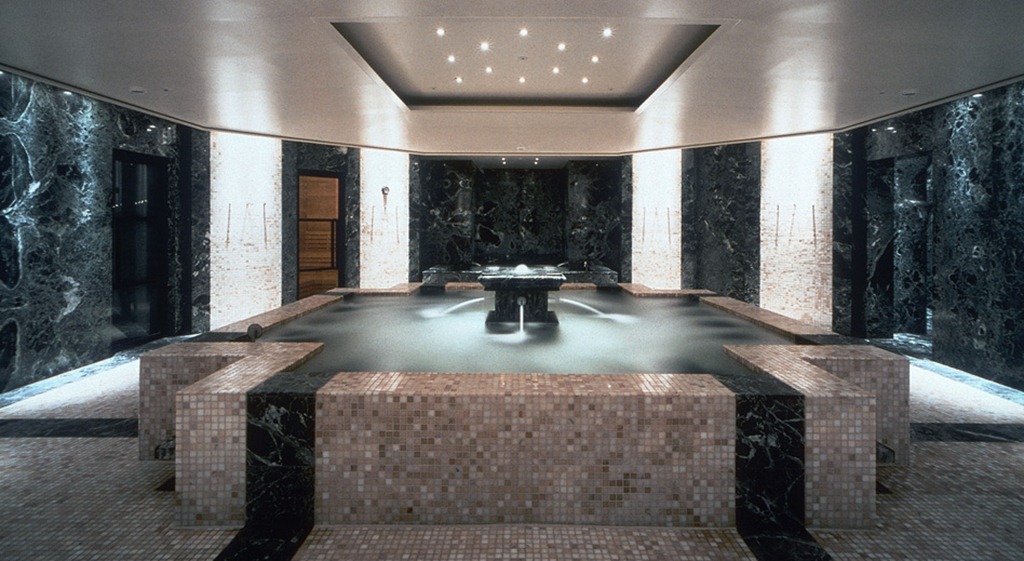 Add in the immaculately clean facilities, complimentary bathrobes, razors, lotions, and shower supplies and you have one really nice spa. The sauna normally runs at 4000 yen per stay, but was complimentary thanks to Mrs. Selfish’s diamond status.

Room Service: The Breakfast of Champions

Finally, there was breakfast. Mrs. Selfish tends to enjoy sleeping in, while I have always been described as “cheap”,”really cheap,” and “that cheap bastard” – thus our conflicting ideologies make breakfast a struggle. I like to get up and grab a meal while it’s free, while Mrs. Selfish – if left to her own devices – would gladly sleep in until lunch.

Breakfast comes in four varieties: American, Continental, “Healthy Choice,” and Japanese. For the sake of our vast readership we endeavored to try them all, but sadly came up short on Continental. 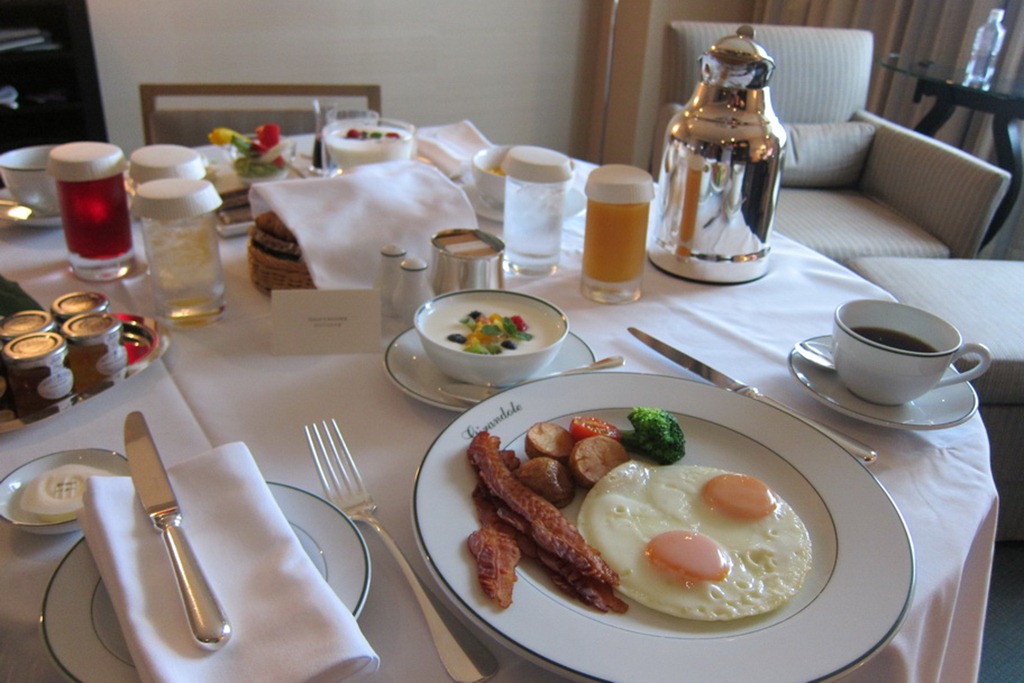 The American: Two eggs in any style, choice of protein, potatoes, yogurt & fruits, and a bread basket + coffee. 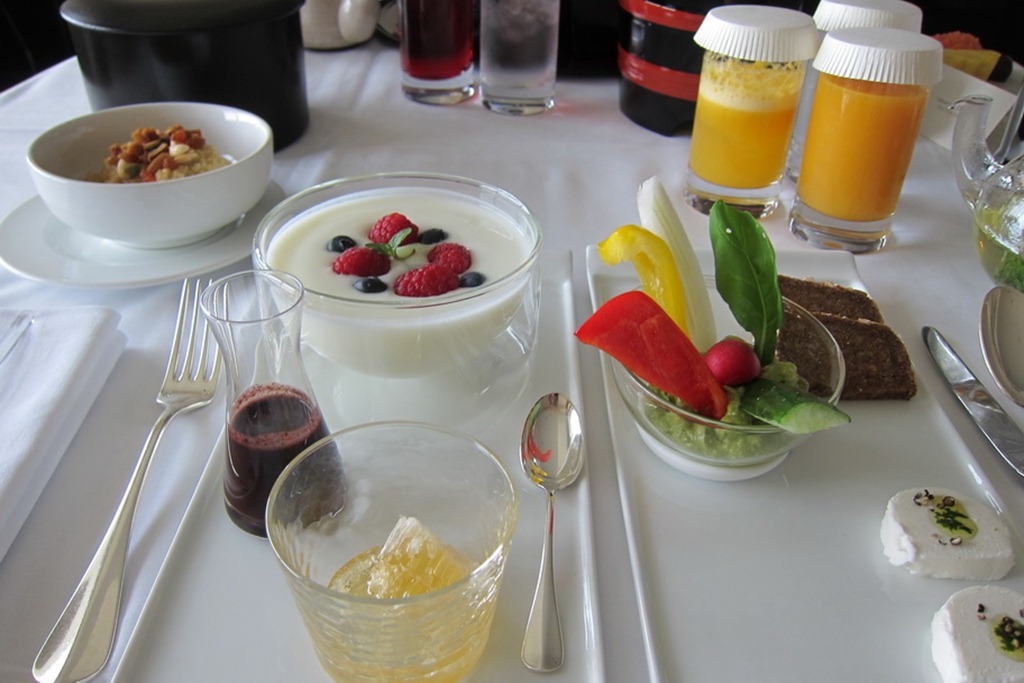 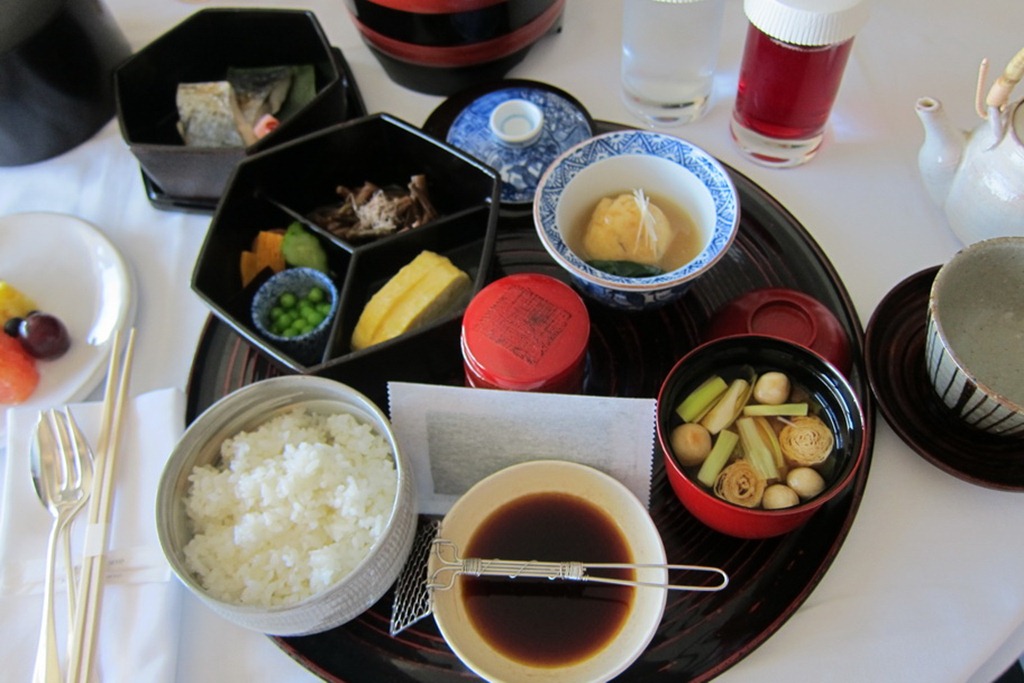 One morning I even managed to wake Mrs. Selfish up in time for the normal breakfast (runs until 11am), since we had heard there were pancakes. 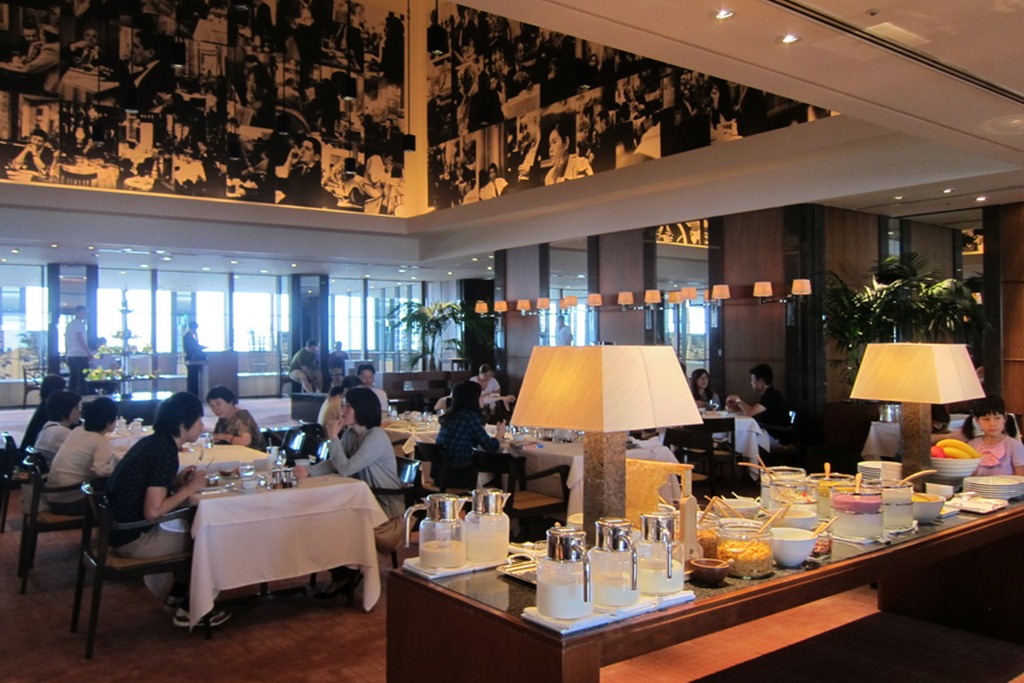 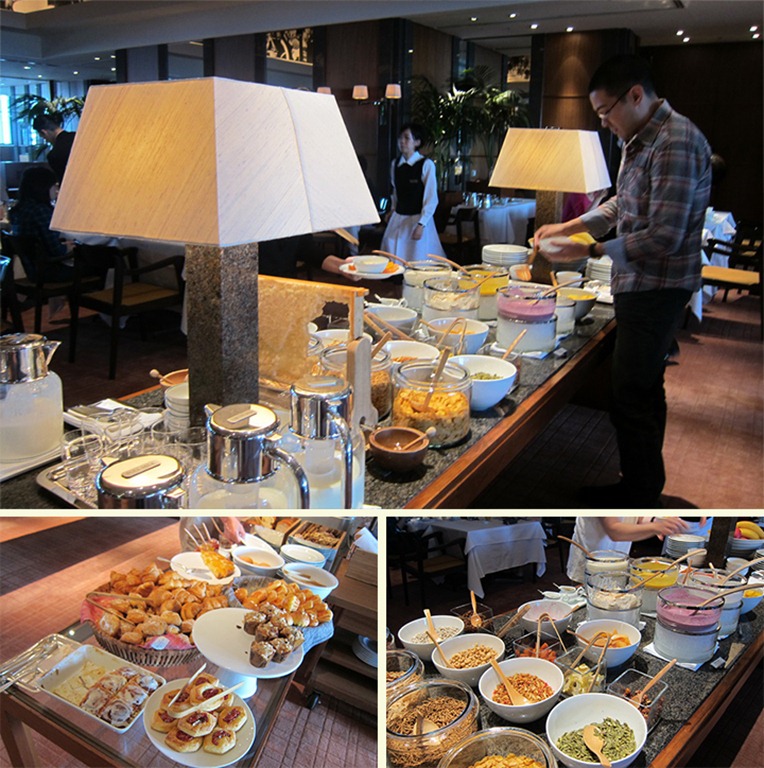 Although eating breakfast with other people was a decent change of pace, the selection was pretty comparable to room service, but service was actually slower. Plus, there were no pancakes.

VERDICT: Opt for room service if given the option.

The Park Hyatt Tokyo is a crowd-pleaser. While we found the room itself to be a little standard, the bathroom, breakfast, gym, sauna, views, NY Bar, Happy Hour, and overall level of service made the Park Hyatt Tokyo the most amazing stay we’ve had yet.

With an excellent location, stunning views, and a staff with an incredible focus on service, the only downside is you might never leave the hotel to see Tokyo proper. Just make sure you go as a diamond member – you won’t be disappointed.