One of the true Aussie specialty foods, Aussie Pies are like miniature chicken pot pies – a little bit of joy that fits in the palm of your hand. Aussie Pies come in a ton of varieties, though the most common types we encountered were Steak & Pepper, Chicken & Leeks, and Steak & Kidneys. You can find them at pretty much any bakery, pub, or grocery store. So good. 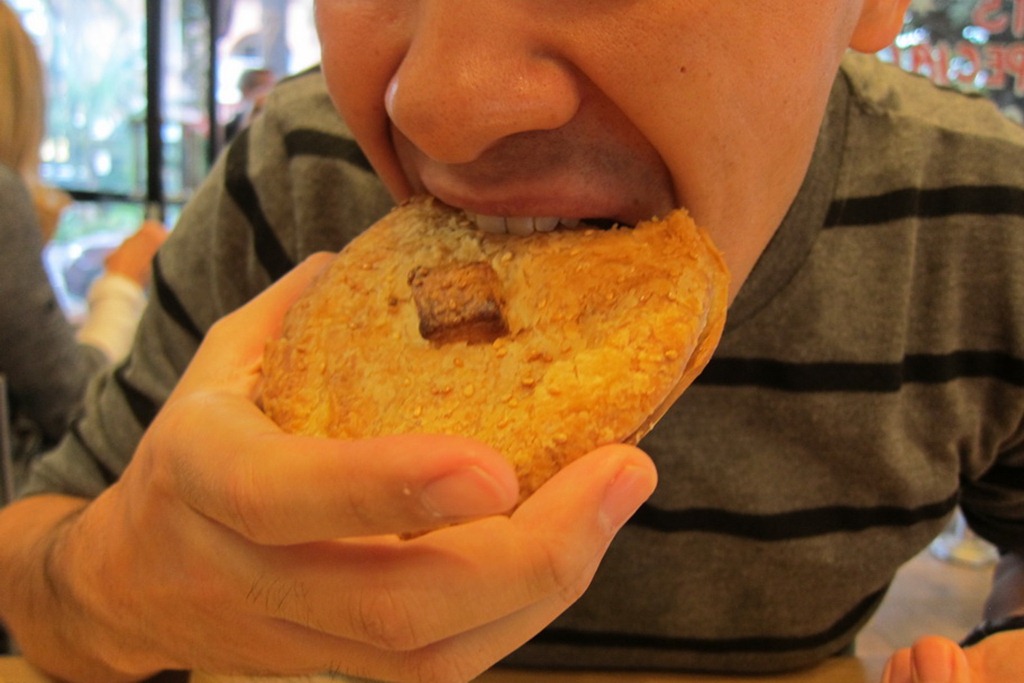 After our first encounter with an Aussie Pie Mrs. Selfish and I were hooked, so we set out to find the Best Aussie Pie in Sydney. 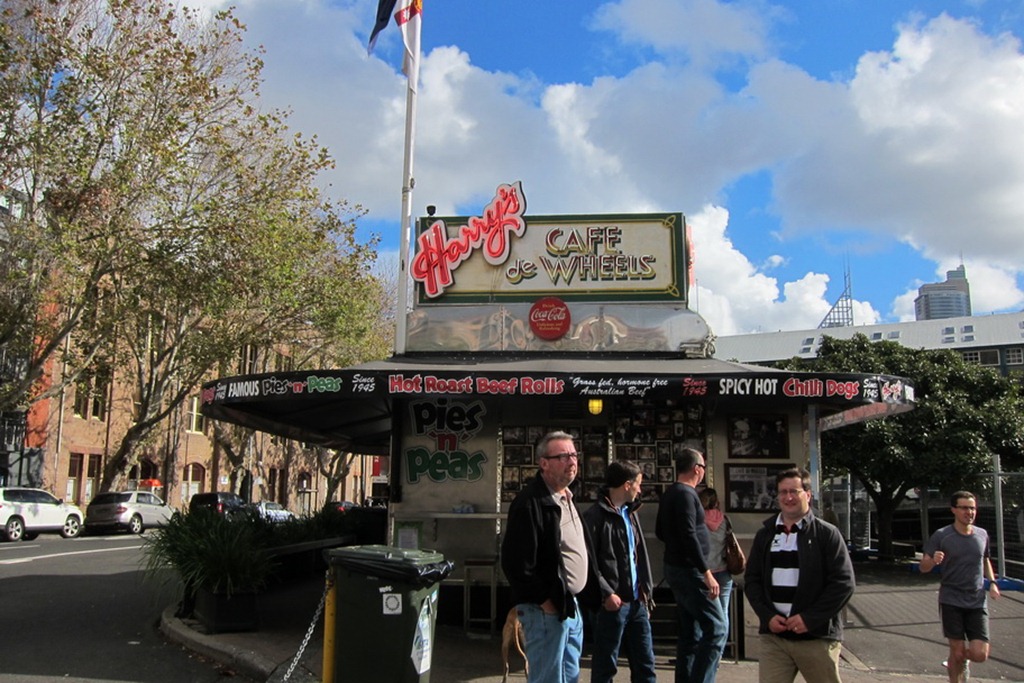 Our first introduction to Aussie Pies, Harry’s Café on Wheels is a mainstay in Sydney, having been in the city since 1945. Mrs. Selfish and I decided to try the Tiger, which is beef pie with mash & mushy peas. 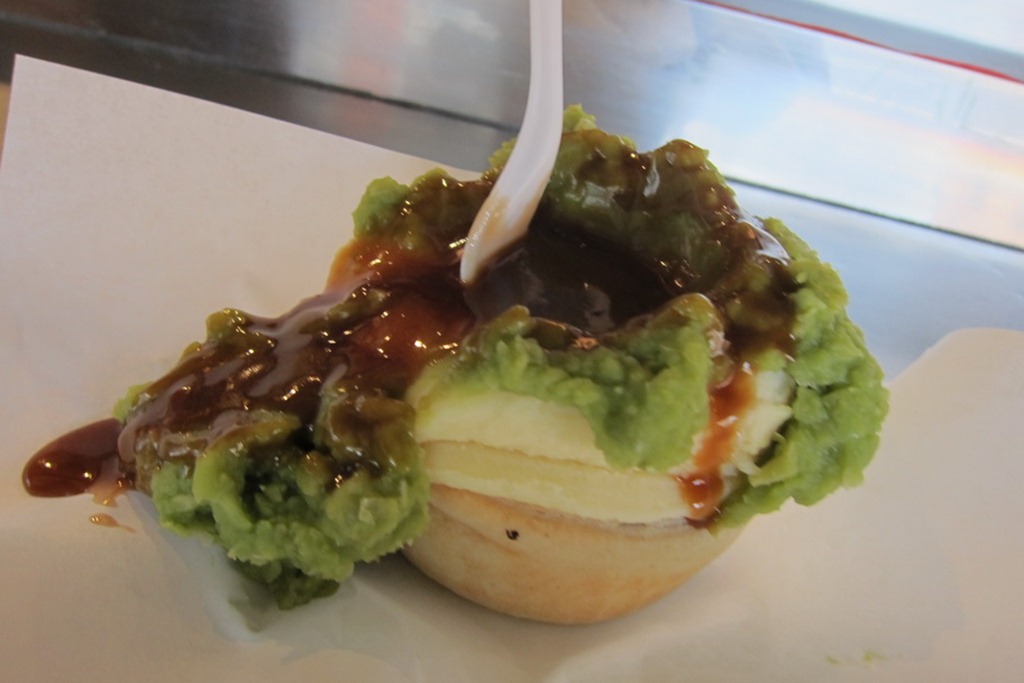 The Tiger had excellent flavor, with the beef flavor blending sublimely with the gravy, mash and mushy peas. More mountain of food then hand-sized pie, I was surprised at how well the pie’s crust stood up to the gravy and peas – maintaining its crunch through the course of the (albeit short) meal.

VERDICT: Decadent & delicious, the Tiger was loaded with flavor – and mash & peas. We later tried the curry variation, which was excellent as well, but for a starter pie I would try their classic Tiger. 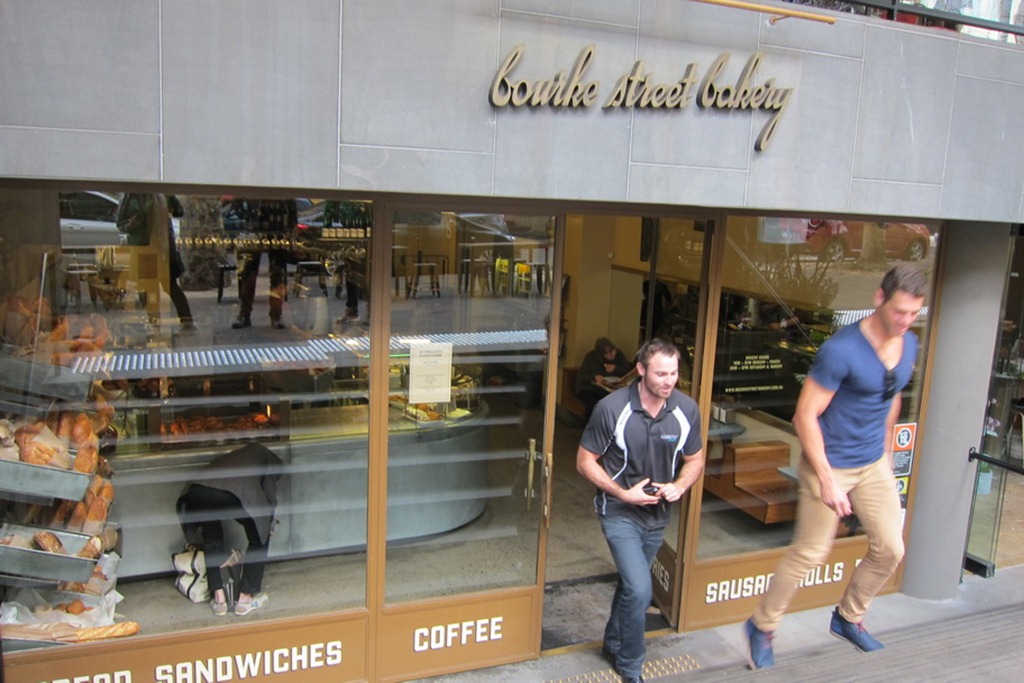 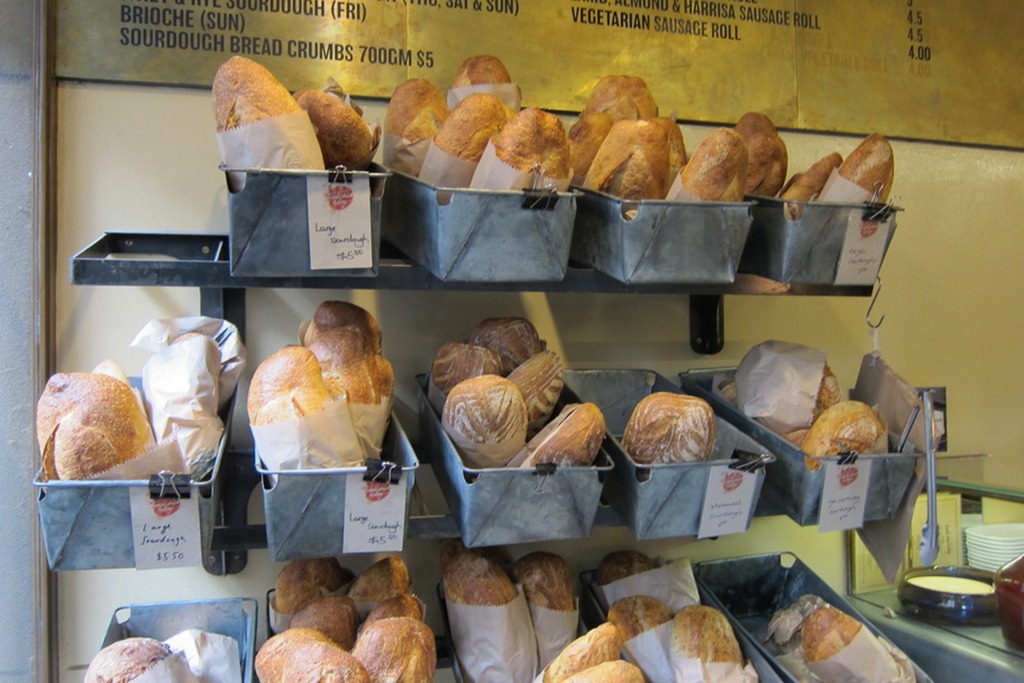 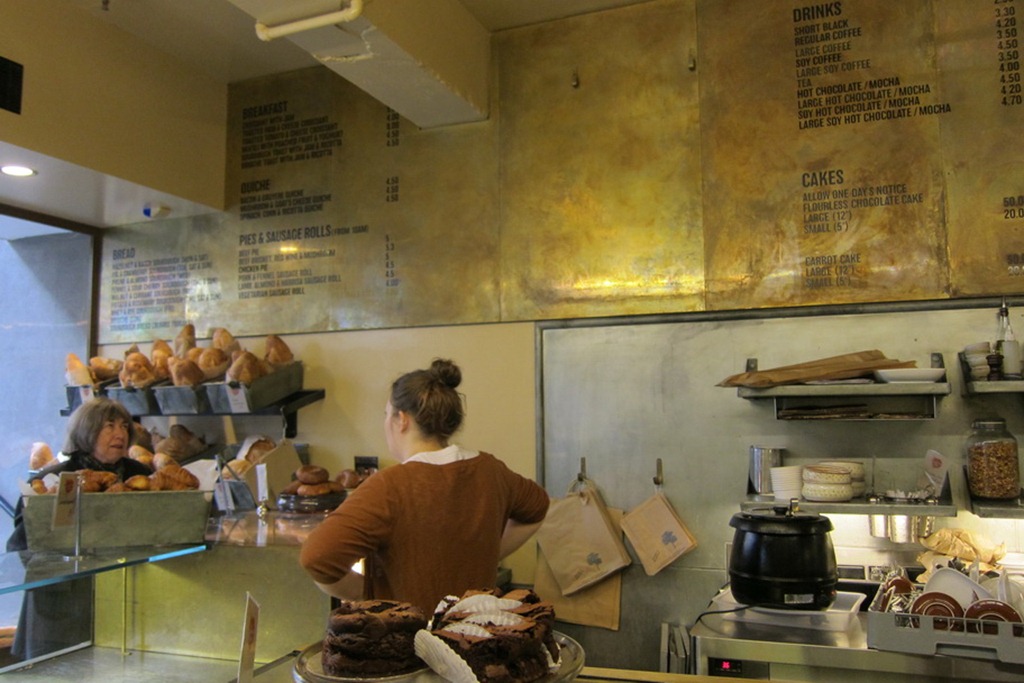 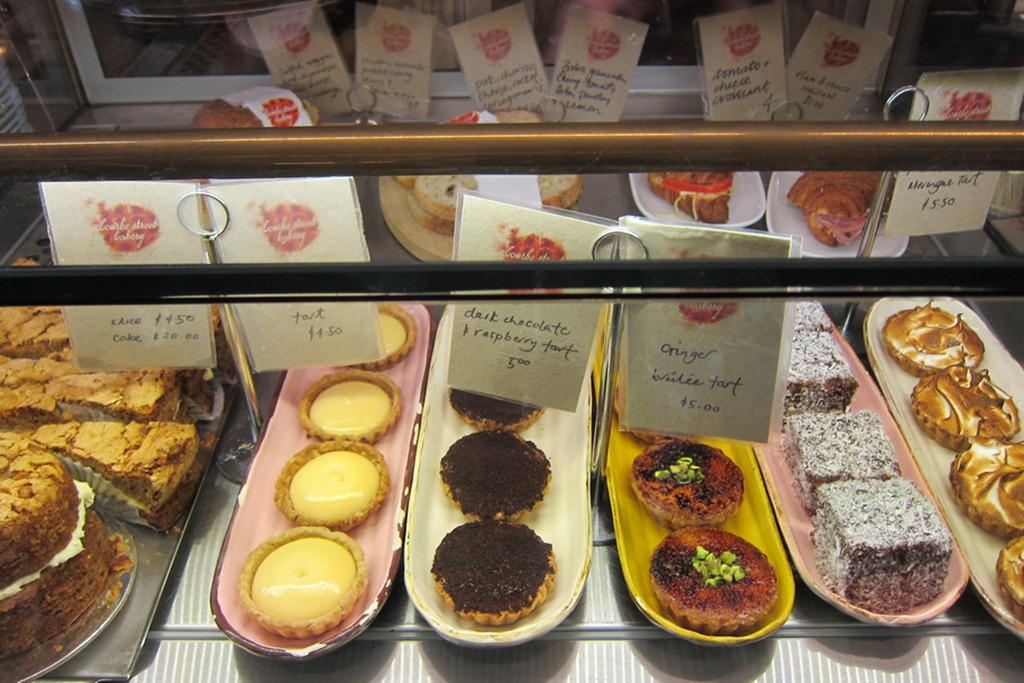 Mrs. Selfish and I decided to tuck into the classic Steak & Black Pepper Pie and a Sausage Roll. 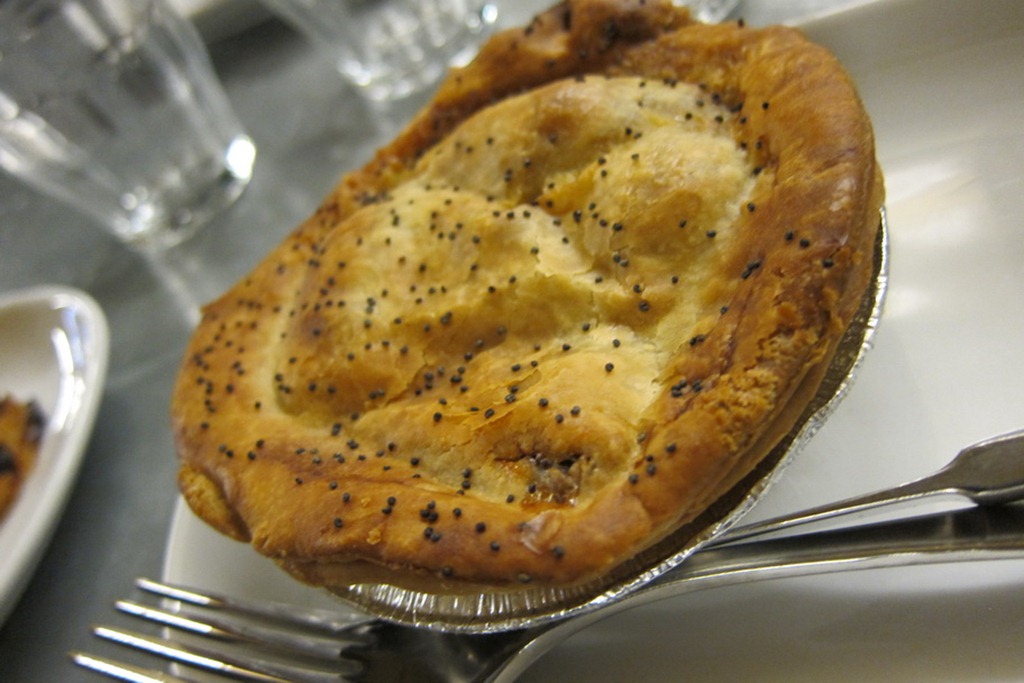 The Steak & Black Pepper pie was excellent, though the black pepper slightly overpowered the flavor of the beef. Nevertheless, the crust was an excellent golden brown: crunchy on the outside, and flaky in the center. 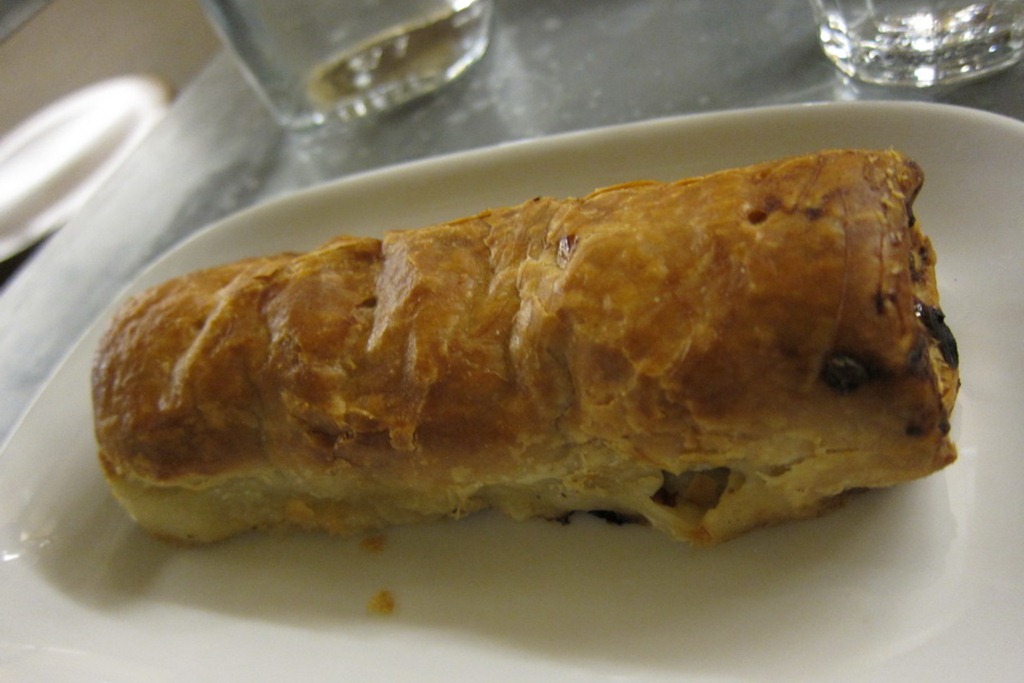 The Sausage Roll, on the other hand, was outstanding: warm, flaky, and filled to the brim with flavor. I’m not sure what type of sausage they put in there, but it tasted like it was packed with a chef’s secret stash of herbs and spices.

VERDICT:  Skip the Aussie pies and go for the sausage roll.

Pies by the Man: Pie Face 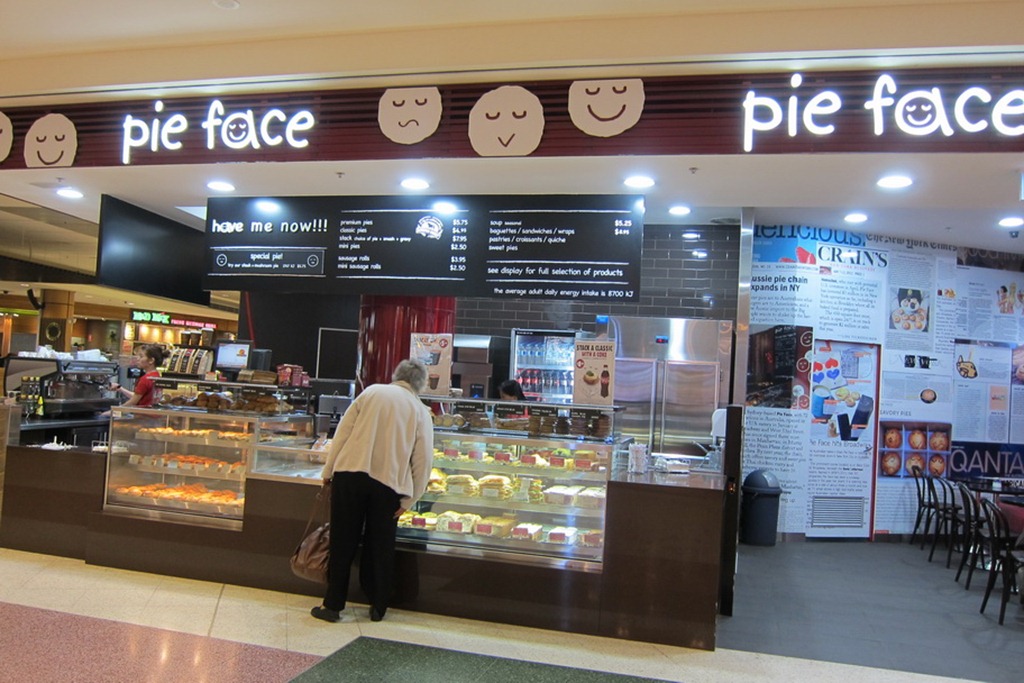 For our last and final pie (at least in Sydney), Mrs. Selfish and I decided to try Pie Face, a major Aussie Pie chain. The pies are cutsie and are actually decorated with little faces, hence the name. 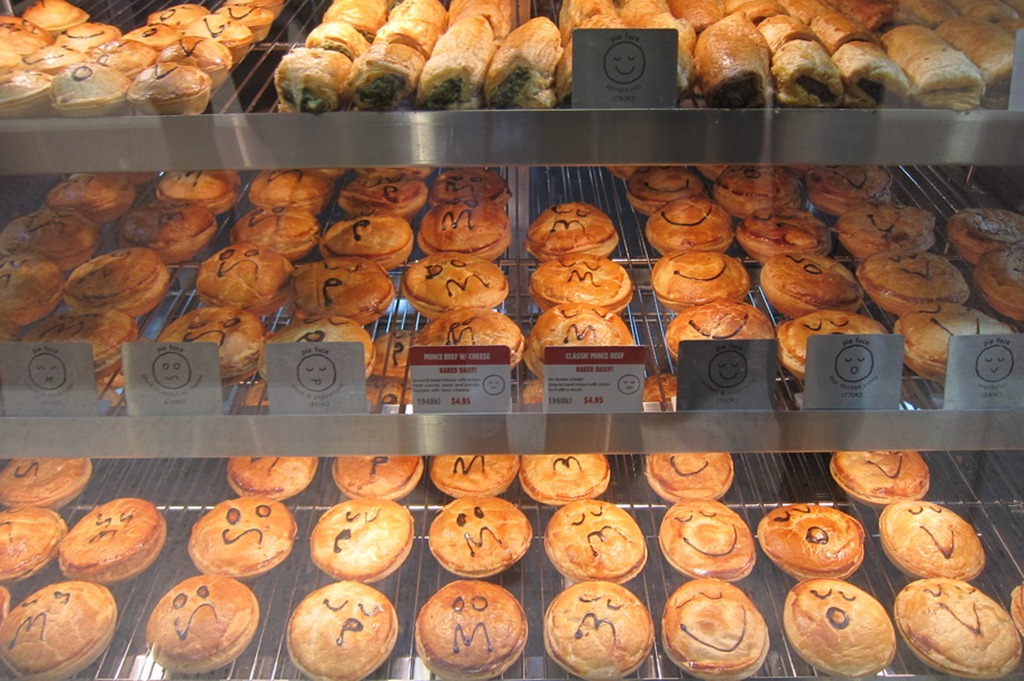 Since it was breakfast, Mrs. Selfish decided to try the Bacon & Egg pie, while I once again tried the Steak & Peppercorn. The cashier asked us if we wanted tomato sauce (translation: ketchup), which I opted for. 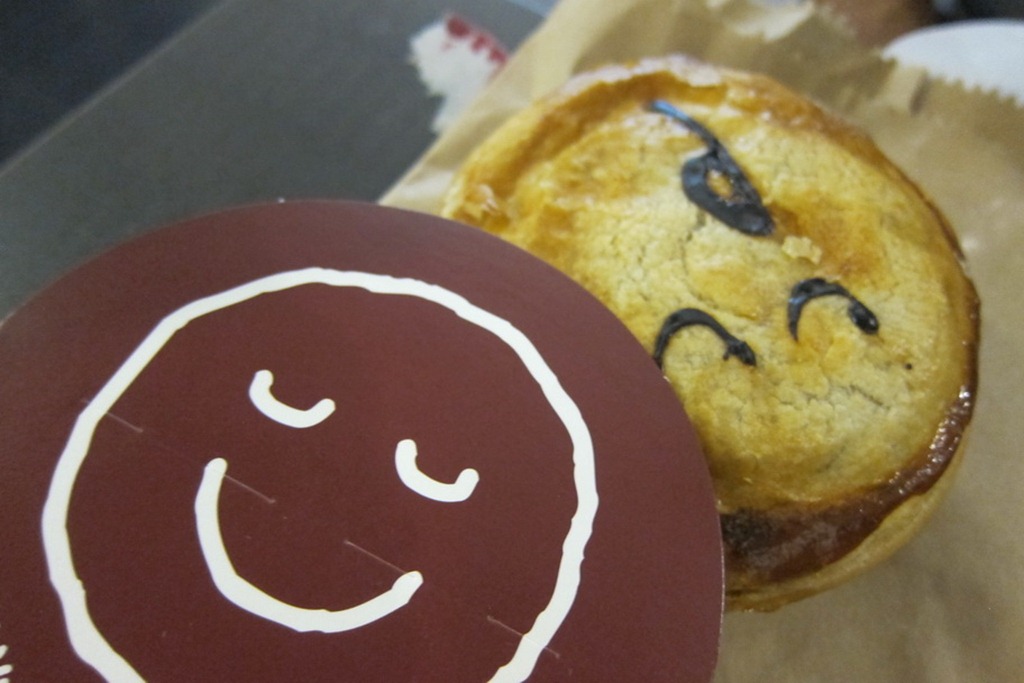 The Steak & Peppercorn was a little bland, though the crust was decent. The ketchup brought an added dimension, though I’m not sure if it was much of an improvement. 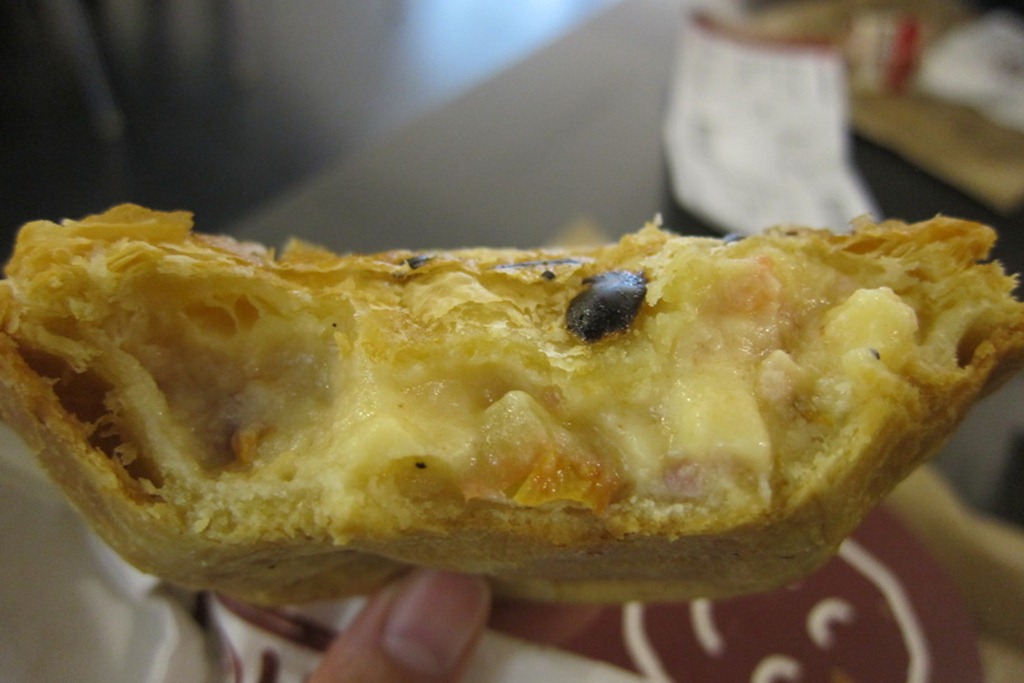 Mrs. Selfish’s Bacon & Egg pie, on the other hand, was overwhelmingly creamy. With every bite a little bit of pie insides would shoot out the side, causing a scorching mess. The bacon was also more of a Canadian bacon style, to my disappointment.

VERDICT: Pie Face is a little bit meh, but could do in a pinch if you’re in desperate need of an Aussie Pie. Otherwise you’re probably best off hitting a local bakery.

FINAL TALLY: If you’re looking for a great Aussie Pie in Sydney, check out Harry’s Cafe on Wheels – and while you’re at it you’re only a 10 minute walk away from great Sausage Rolls at the Bourke Street Bakery.

2 thoughts on “Searching for the Best Aussie Pie in Sydney”