Editor’s note: This is the first of three posts on the Hilton Bora Bora. Check out our other posts here:

After our evening of cold croque monsieurs in Tahiti, Mrs. Selfish and I awoke early the next day and boarded a plane for Bora Bora, one of the most beautiful (and expensive) places on Earth.

Having read good things about the Hilton Bora Bora, I was anxious to check out our new home for 5 nights – an overwater bungalow in some of the most magnificent waters I’d ever seen. I booked the stay before the Hilton Honors great devaluation using an AXON award and an extra night, so the total came to 195,000 HHonors points. 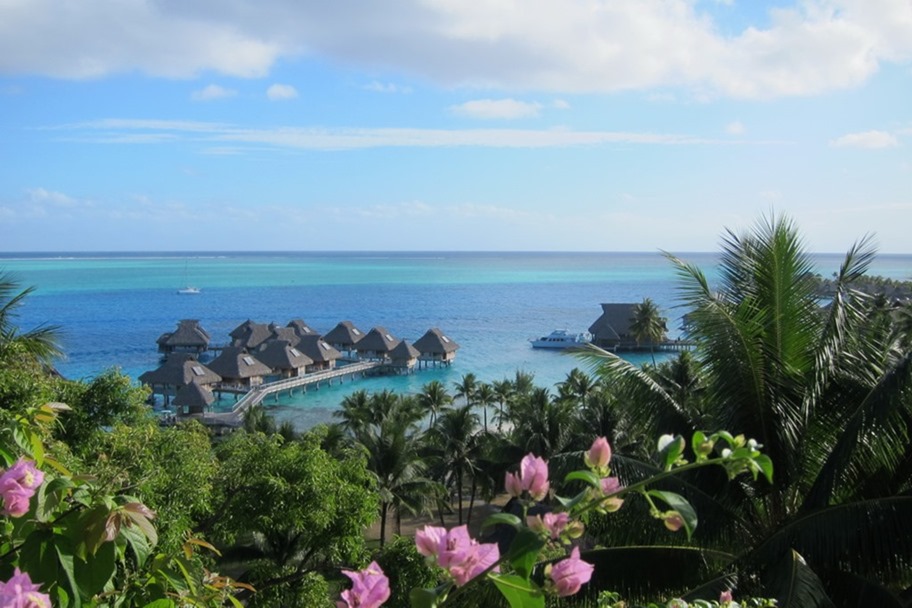 Getting there and check-in

Getting to Tahiti itself can be quite difficult on miles and points, though flyertalk has several threads devoted to the topic as I mentioned yesterday. 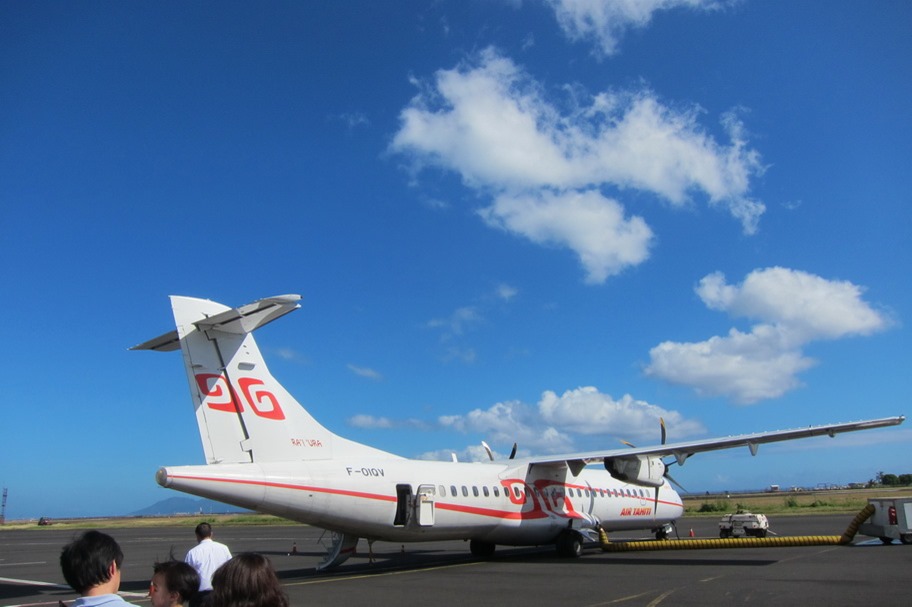 Once you’ve reached Tahiti the intra-island flight from to Bora Bora is costly at roughly ~$450 round trip. Air Tahiti Nui has multiple flights a day starting in the early morning and ending mid-evening, but unfortunately none of these accept points or miles, just cold hard cash.

Pro-tip: Sit on the left side of the plane for stellar views of Bora Bora

After landing, you have two options for getting to the Hilton Bora Bora: a) take Hilton’s fancy speedboat to the property for roughly $125 per person round trip, b) take the boat into Viatape (the main town) and then catch Hilton’s boat from there for roughly $8 round trip. While we chose option B, we ended up giving our bags to crew of Hilton’s speedboat, which they brought to the hotel for us. I highly recommend this option.

Getting to Bora Bora proved more difficult than most destinations: with 2 flights to Tahiti, a plane to Bora Bora, a shuttle boat to Viatape, and a boat to the Hilton Bora Bora, but man is it worth it.

Bora Bora is easily the most beautiful beach destination we’ve ever been to, beating out Koh Samui, Bali, Danang, and Cancun. Since Mrs. Selfish and I wanted to maximize our time at the resort, we took a late-morning flight in, and an early evening flight out and boy was I glad we did, the Hilton Bora Bora is gorgeous.

Check-in was quick and painless – after confirming our identities we were escorted by golf cart to our room, room 105.

After our brief stay at El Nido in Palawan, Mrs. Selfish and I were keen on staying in another Overwater Bungalow. The standard award at the Hilton Bora Bora is a lagoon view suite, and an upgrade will only land you a garden villa. While the villas are quite nice, the water in Bora Bora is perhaps its most outstanding feature, so I decided to contact the hotel itself.

After some minor back and forth bargaining, we decided to pay the 22000 XPF a night to upgrade to a deluxe overwater bungalow. The resort has both standard and deluxe overwater bungalows, with the standards costing ~11000 XPF a night. Unfortunately, you can’t pay to upgrade to those ahead of time, but if you come during a low season your chances of finding a standard OWB are pretty good.

Since we ended up upgrading to a deluxe OWB, I requested room 105, which was highly recommended on flyertalk thanks to its spectacular view of the volcano.

Our overwater bungalow was spectacular. Seriously, pictures can’t do this thing justice. 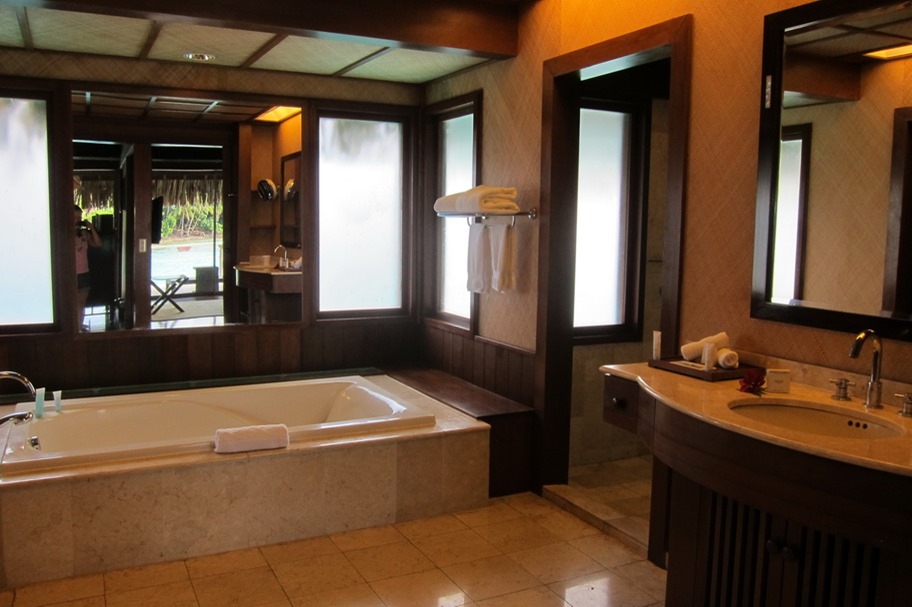 The bungalow, while a little dated, is pretty well equipped with three distinct areas – a living room, bedroom, and bathroom. The bathroom has separate his and hers sinks, a giant bath tub, and separate rooms for the shower and toilet.

The bungalow sits above about 10 – 12 feet of lagoon seawater, and is home to thousands of tiny fish. Since each OWB is equipped with lights, its easy to attract the fish to your bungalow, which you can view from one of four downward facing windows. We repeatedly smuggled out small rolls of bread and cereal from breakfast to feed the fish, though the hotel also has fish food you can purchase.

As a gold member, Mrs. Selfish received a bottle of Evian water and a plate of baked goods, which were alright. 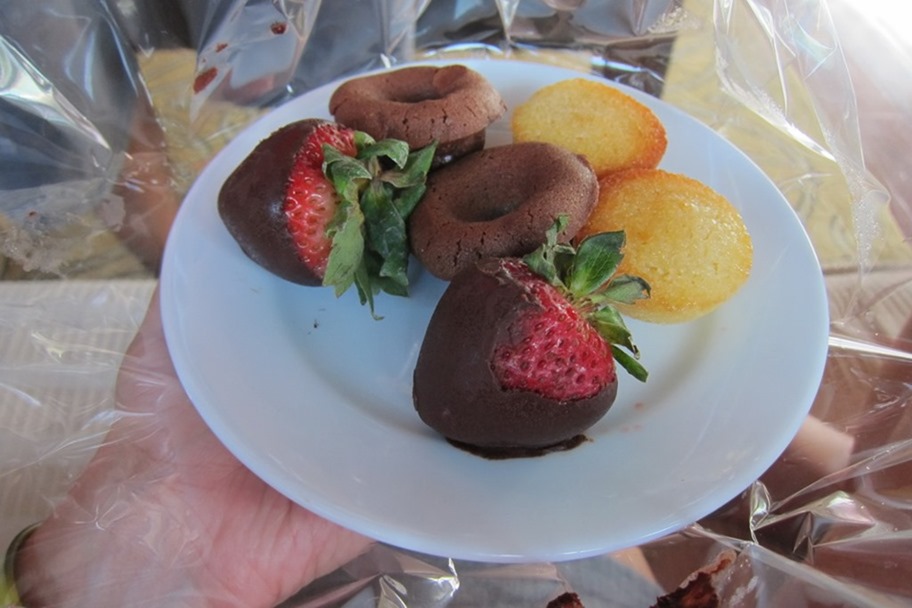 The most spectacular feature, however, was the deck, which came with an amazing view of the volcano. 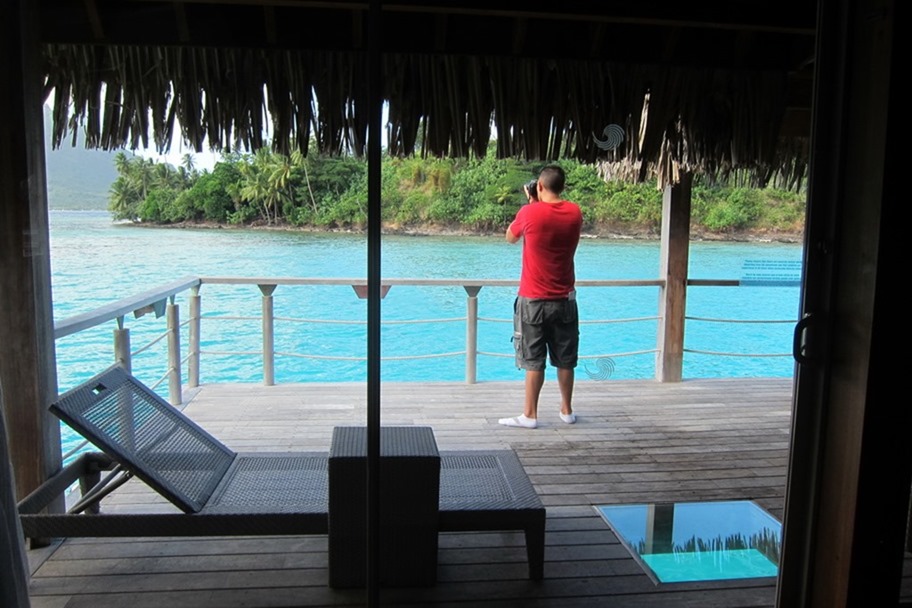 The Hilton Bora Bora is located on a very beautiful stretch of land, facing out away from Bora Bora. We spent a large part of the visit gawking over how beautiful everything was. 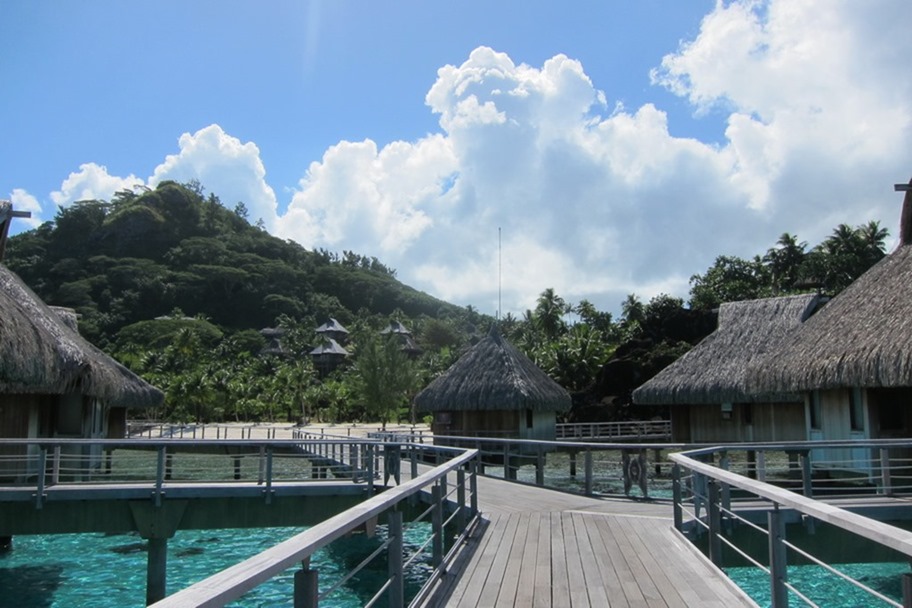 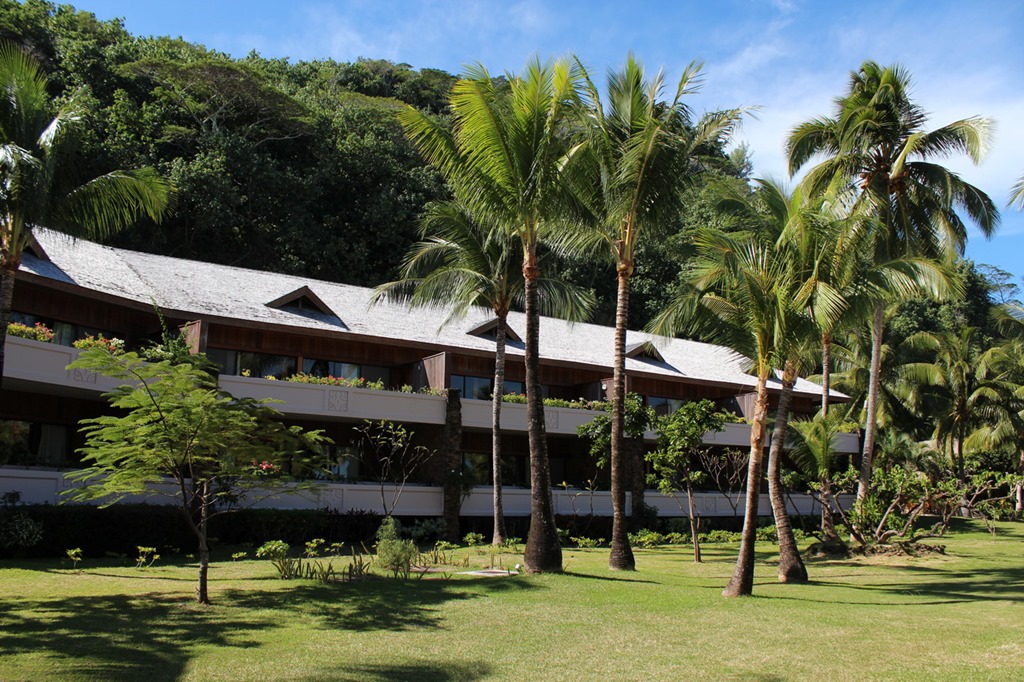 Things got even more beautiful during sunrise, since the sun rose right next to the volcano.

Breakfast at the Hilton Bora Bora is pretty much your standard continental fare, though there are a few made to order dishes. Breakfast is served until about 10:30 every morning in the quasi-outside dining area by the pool and is free to Hilton gold and diamond members.

While not the best breakfast food I’ve had at a hotel, it’s hard to argue with the price.

The Hilton Bora Bora is mile & point hoarder’s dream hotel, and a great aspirational property. With perfect views and amazing weather (especially in the June-July season), it’s impossible not to be seduced by its charm. This was easily the best beach destination we’ve been to, and even though we just returned, I’m already itching to go back.

Over the next few days I’ll talk more about food and activities around Bora Bora. Stay tuned!