This is the third of eleven posts on Taiwan. Check out our other posts here:

Taiwan is a tropical Asian country, which means it is often hot and rainy – especially in the summer. I knew this before we planned the trip, but somehow managed to repress that knowledge in light of great award availability. Somehow, in my mind the fact that May wasn’t *quite* the Summer meant that it would be cool and dry.

Unfortunately, I was totally wrong. While the temperature only hit the lower 80’s during our stay in Taipei, it managed to rain nearly the whole time.

Despite the less-than-perfect weather, however, I would highly recommend walking around Taipei. There are tons of free sights, and they are all worth visiting. 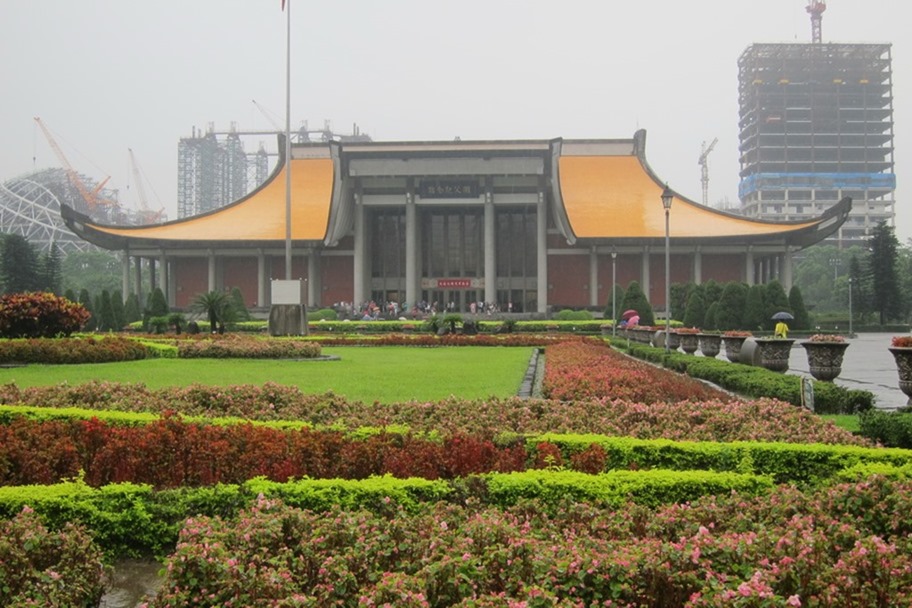 A memorial hall formed to celebrate the legacy of Dr. Sun Yat-Sen, one of modern China’s greatest leaders. Dr. Sun Yat-Sen was China’s first president, and played a key role in overthrowing the Qing dynasty.

Dr. Sun Yat-Sen is pretty unique in Chinese history in that he is revered by both Communist Chinese and the more democratic Chinese who fled to Taiwan after the Communist party came into power.

The main part of the hall was packed with Chinese & Taiwanese tourists who were there to pay their respects (or perhaps to escape the rain). 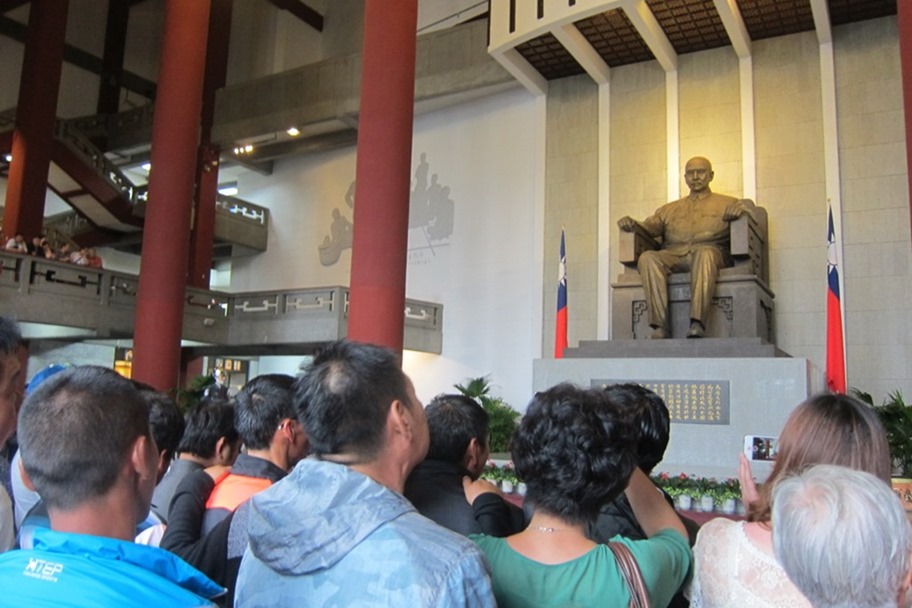 The rest of the memorial is a small museum, which tells the viewer a little bit about Sun Yat-sen’s life. It’s even replete with a creepy talking 2d version of the man. 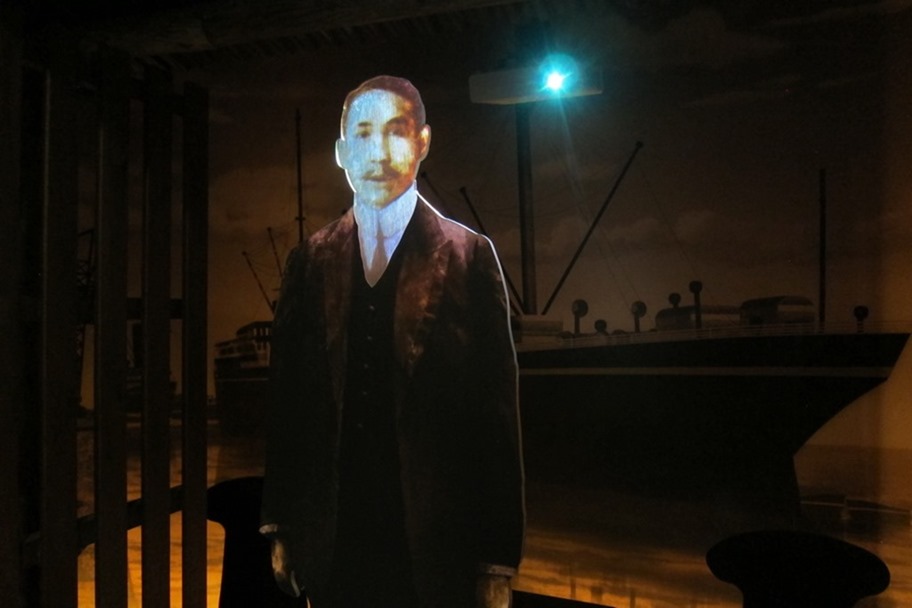 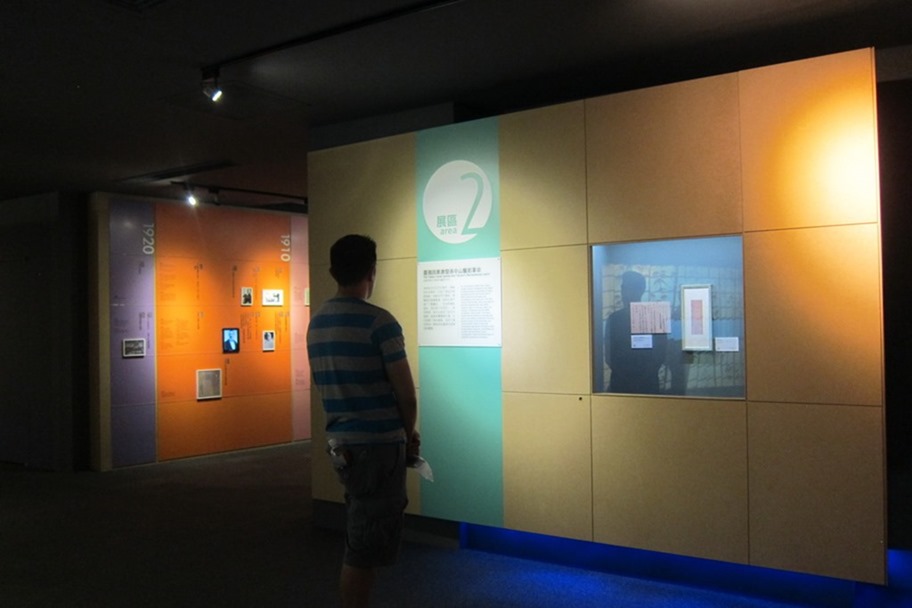 Heir apparent to Dr. Sun Yat-sen, Chiang Kai-shek took Sun’s place as the leader of the Nationalists in 1925. Kai-shek fought with the communists constantly, eventually losing.

His army fled to Taiwan in 1949 along with millions of Chinese nationalists, where he imposed martial law and persecuted people for a 38 year period known as the White Terror. Interestingly, a lot of the persecuted people ended up in prison on Green Island (more on that in future posts). Chiang Kai-shek died in 1975, and a year later the Taiwanese government broke ground on the National Chiang Kai-shek Memorial Hall.

While the man’s actions were more than a little questionable, the memorial hall is unquestionably awesome. 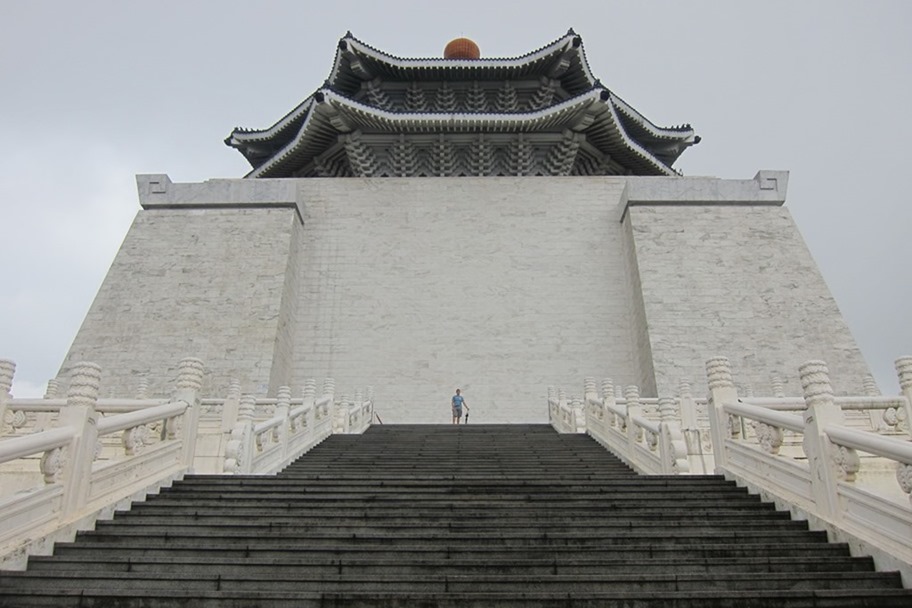 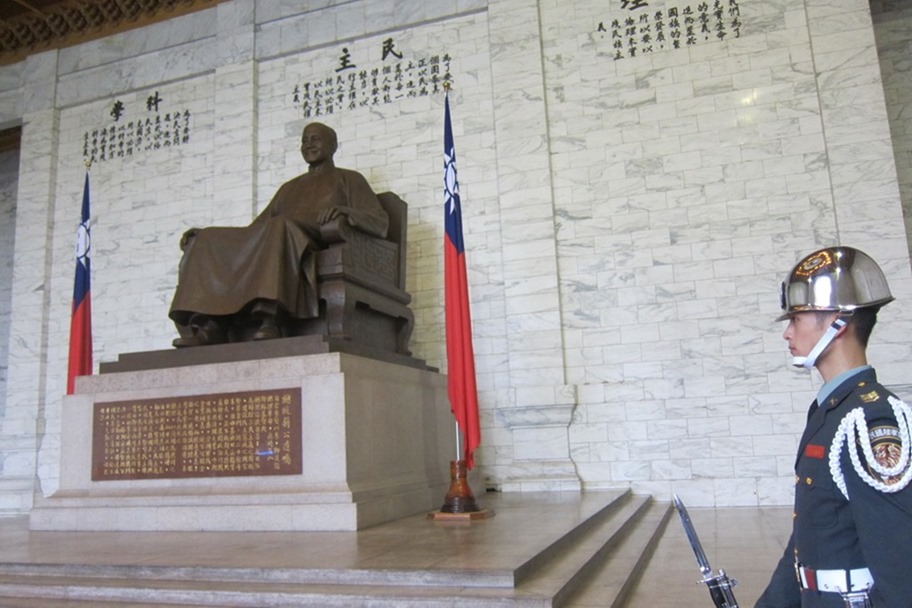 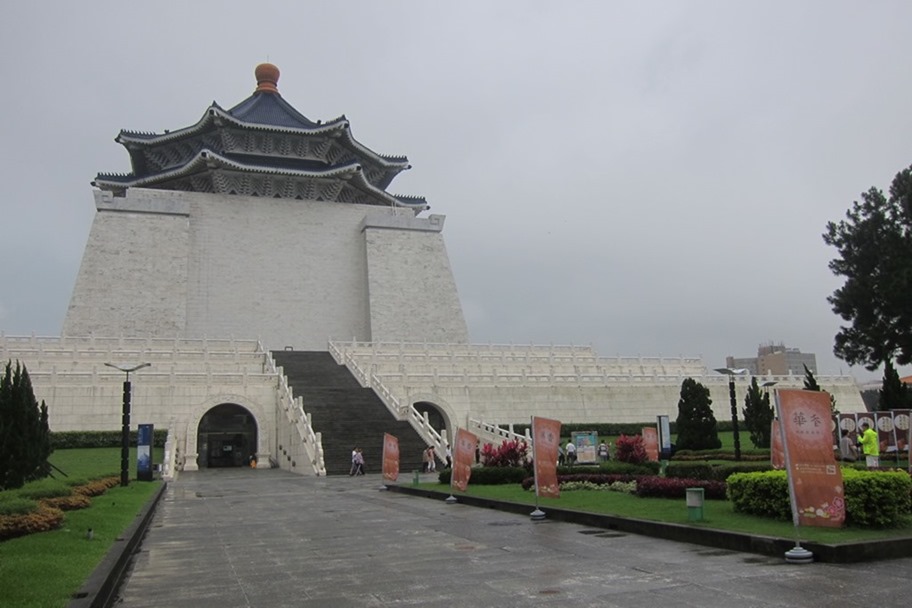 Pro-tip: the restaurant that created bubble tea is in the building on the right! 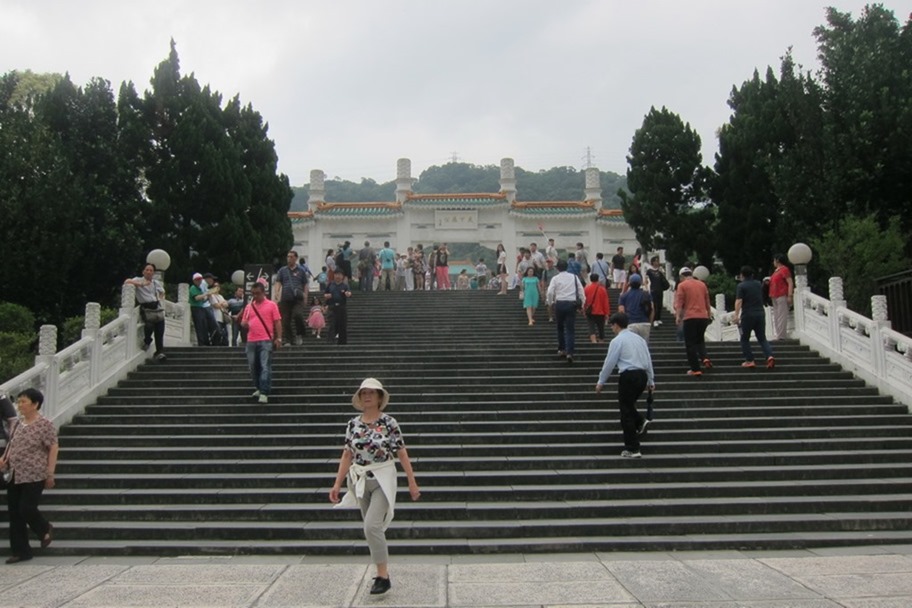 Taiwan’s answer to the Shanghai Museum, the Taipei National Palace Museum is an amazing collection of Chinese artifacts. Unfortunately, you can’t take pictures inside (boo-urns!).

Unlike the other sights in this post, the Taipei National Palace Museum will set you back a cool $250 TWD (~$8.50), but is totally worth it. When the Nationalists fled China they basically took every Chinese artifact that wasn’t nailed to the ground and brought it with them to Taiwan, where they deposited the artifacts into this museum. 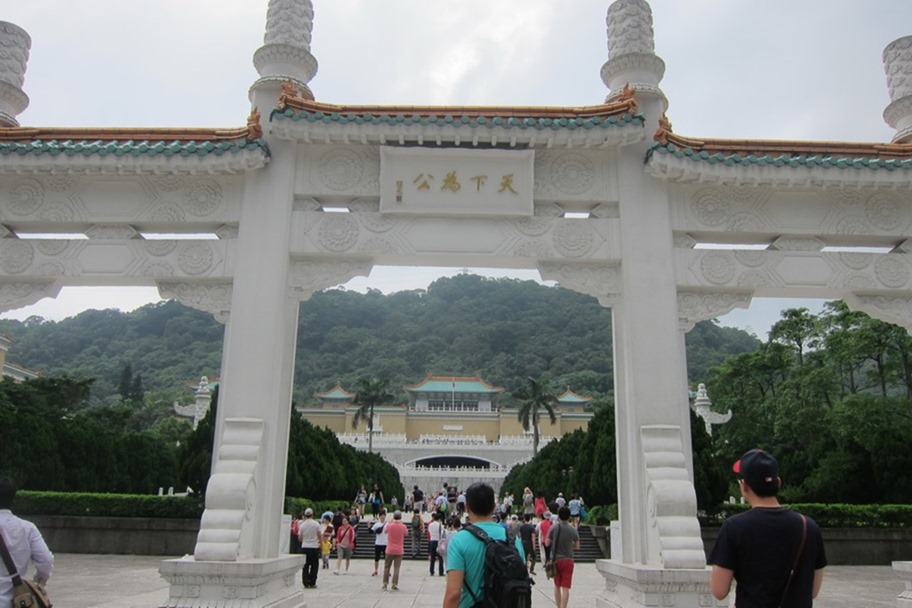 The building itself is also pretty spectacular and often has extra exhibits. When Mrs. Selfish and I visited in May 2014 we managed to catch an MC Escher exhibit which featured hundreds of pieces of work done over the course of his life time. Pretty frickin’ cool.

A Chinese temple built in 1738, the Longshan Temple has been renovated several times over the course of its life time. It was most notably bombed by American forces during WW2, who thought that the Japanese had hidden munitions inside.

While similar to many Chinese temples we’ve visited, the Longshan Temple is worth a visit, especially if you’ve never visited been to one before. It’s perhaps most famous for its bronze dragon columns, which are unique to the temple. 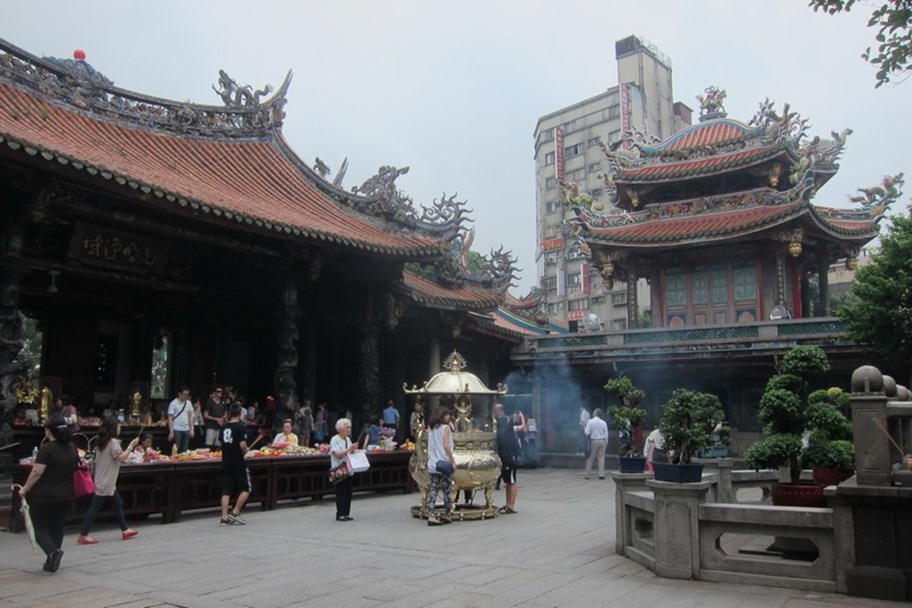 Join us tomorrow when I’ll discuss some of Taipei’s more famous sights… the night markets!