This is post four of twelve on our autumn trip to South Korea. Check out the other posts in this series here:

Having eaten our way through the northern side of Seoul during our Selfish Year (and because Mrs. Selfish was less mobile this time around), we decided to try some of the eats on the Gangnam side of Seoul.

Seoul has tons of good restaurants, and is a fairly cosmopolitan city. That being said, I am admittedly and whole-heartedly a cheap eats kind of guy. $10 – $15 per person is my idea of a good meal, so Michelin restaurants were simply not in the cards.

Below are some of the delicious (and affordable) eats we found. Be warned, they are largely Korean chains, but that doesn’t preclude them from being mouth-wateringly delicious.

Fried Rice and Galbi at Yoogane

Located north of Gangnam station off of Saecho-daero 77 gil street, we were famished when we hit Yoogane (possibly not the real name). This was one of those situations where our first choice, a Korean fried chicken restaurant was closed for lunch so we went to our fall back plan of “whatever looks good nearby.”

Good thing too, since the h-anger was starting to set in. Fortunately, Yoogane delivered.

A strange mixture of a BBQ-joint and a bibimbap style meal, Yoogane is a cook it yourself kind of establishment.

After taking our order the server came back and dumped pre-marinated meat and scallions onto our skillet. The smell was intoxicating: meaty, spicy, and slightly tangy with the type of freshness one can only get out of freshly cut scallions. 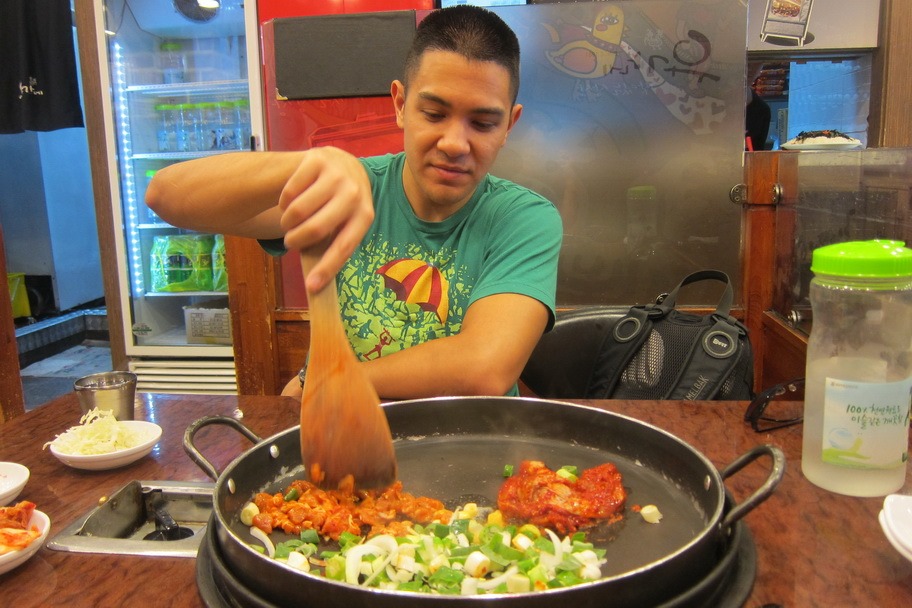 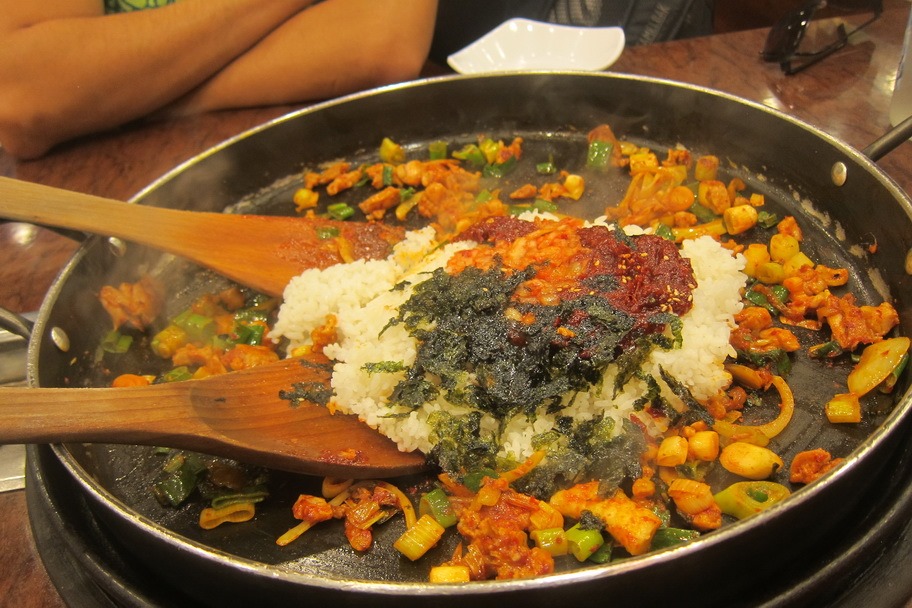 After the meat cooked the server came back with a bowl of rice topped with dried seaweed, which he dumped unceremoniously into the skillet.

The end result was something that looked very much like paella.

For our next meal we hit up KyoChon, a local fried chicken chain. KyoChon is a local success story, and now boasts over 100+ locations (including NYC of all places). This particular store was located north of Gangnam station off of Saecho-daero 77 gil street.

KyoChon had a much more polished look than the previous fried chicken places we had tried our first time around Seoul.

The chicken, however, was still excellent and is exactly what one should expect from a Korean fried chicken establishment: crispy, tender, light, and utterly delicious.

Unfortunately, you can only order the chicken in large batches – no mixing or matching here folks, so come hungry! 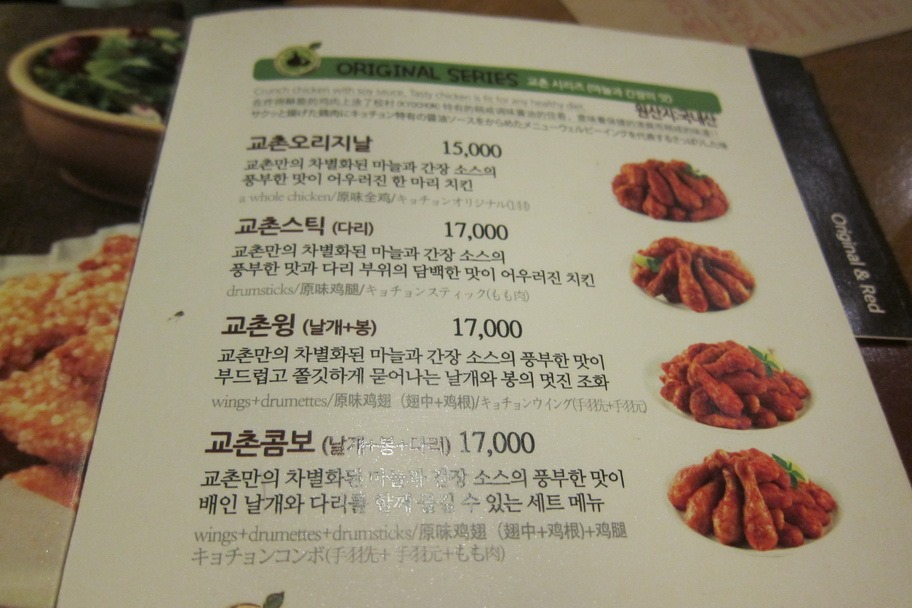 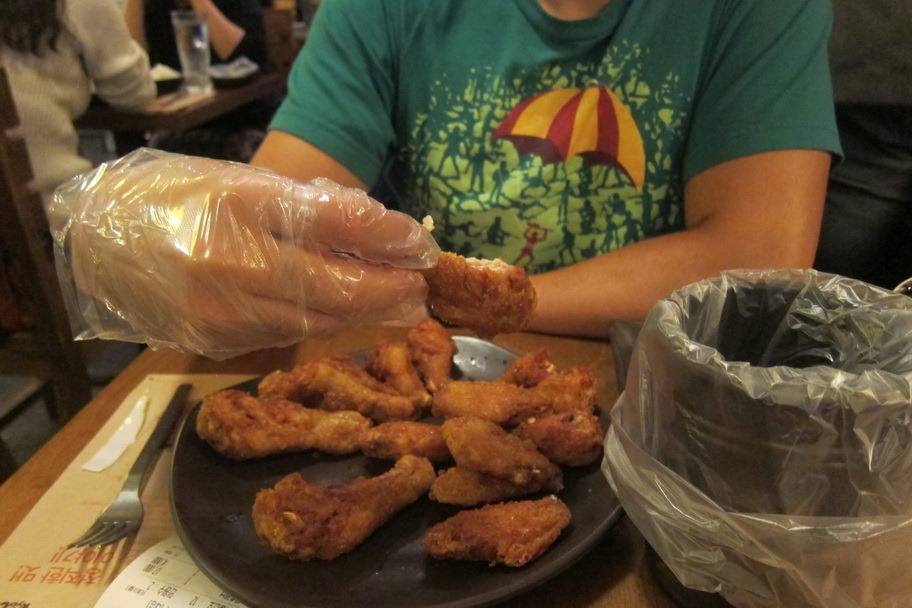 The plate came with a complementary side of pickled daikon cut into cubes. Pickled daikon is kind of a ubiquitous side dish in a culture obsessed with side dishes and in this case is a really refreshing way to cleanse your palette when eating a lot of spicy, fatty foods.

While I found the portion size at KyoChon to be a little too small for two people, 2 orders would have been waaaaaaay too much. Fortunately we had been eating all day, so I wasn’t forced to decide on whether or not I wanted to brave a full order on my own.

Our best meal in Korea: Eating at Bonga

Our favorite meal on this entire trip, however, was easily at Bonga (or TheBorn restaurant?). Located  north of the Sinnonhyeon station off of Bongeunsa-ro 1-gil street just north of Gangnam-daero 118-gil street, Bonga is a killer Korean BBQ joint, serving up some really choice cuts of meat. If you are protein obsessed, this is your nirvana. 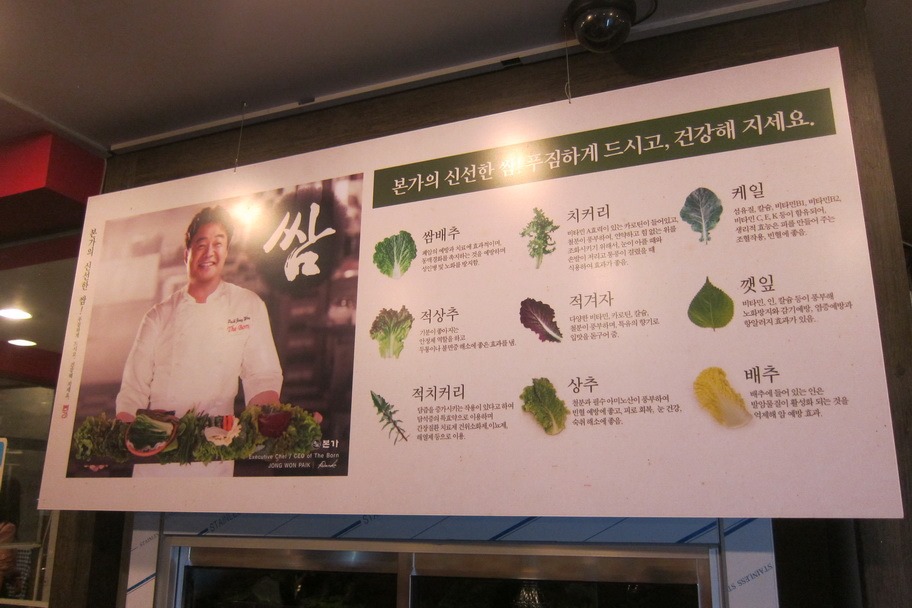 Bonga is a Korean BBQ joint. You order meat. You cook meat. You dip meat in sauce and wrap it in some sort of green before stuffing your face. It is a delicious, smoky, sometimes messy affair.

What really separates Bonga from the rest of the bulgogi/galbi crowd is their signature dish, Woo Samgyup : thinly sliced beef brisket in their signature (and presumably secret) spicy sauce. 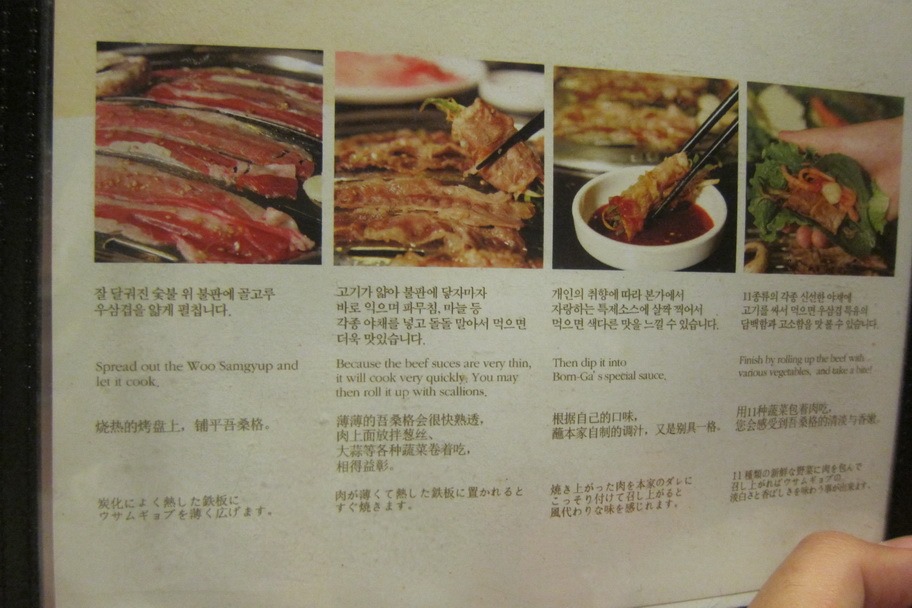 Step 1: Spread out and cook the meat. 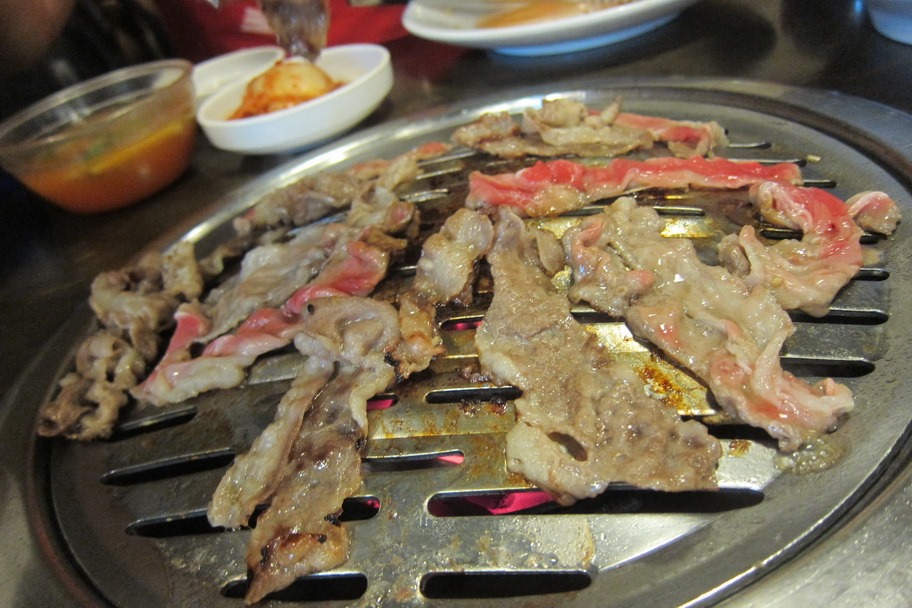 Step 3: Wrap in (optional) greens. Bring to the head. Enjoy. 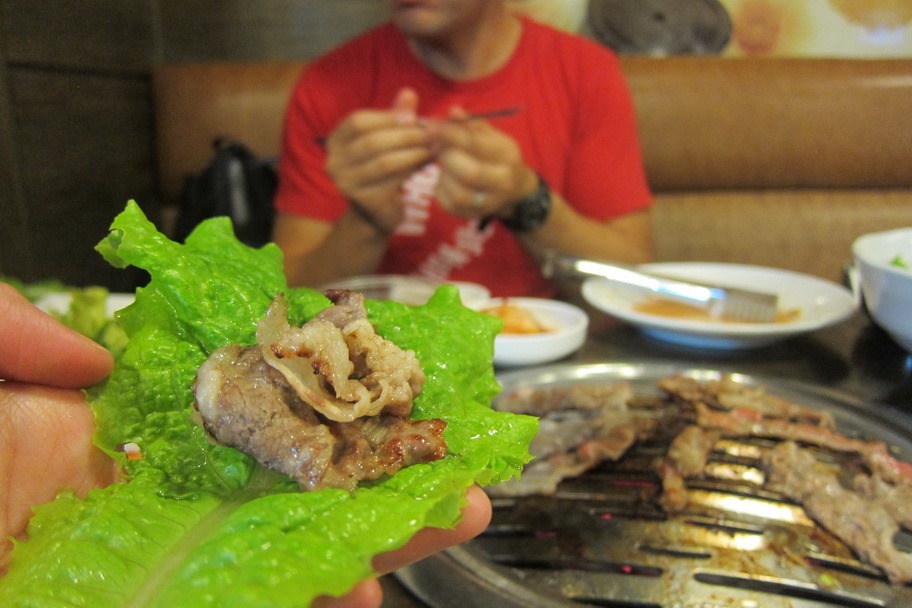 I am a huge fan of brisket, and the Korean version DID NOT disappoint. Crispy, smoky, tender, near-bacony. Your tiny slice of heaven, wrapped in lettuce and doused liberally in just-as-astonishingly good secret sauce. At 11,000 KRW (~$11 USD) for 150g you are not likely to encounter a cheaper, better natural high.

We also ordered their galbi, which was good and grabbed an order of the Chadol-Duenjang Jjigae. 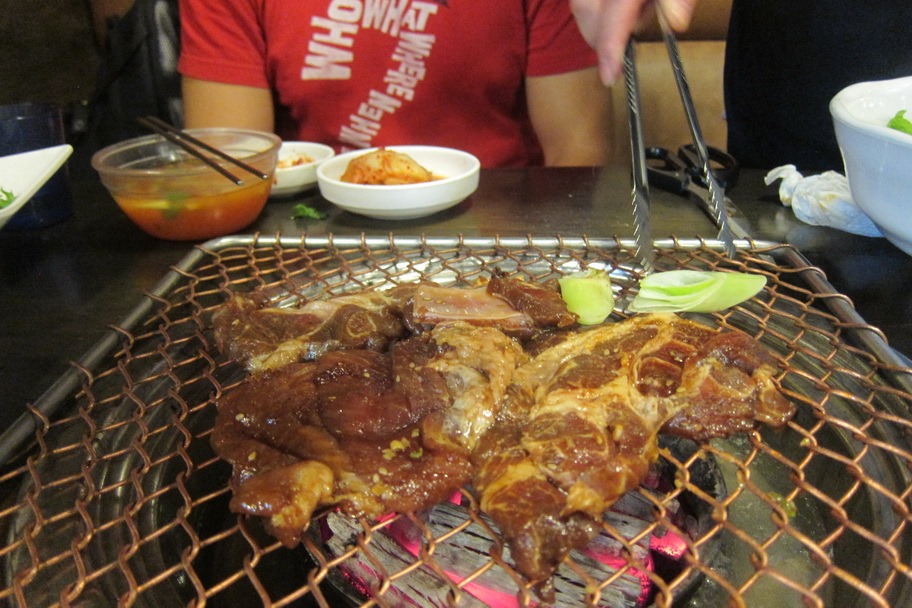 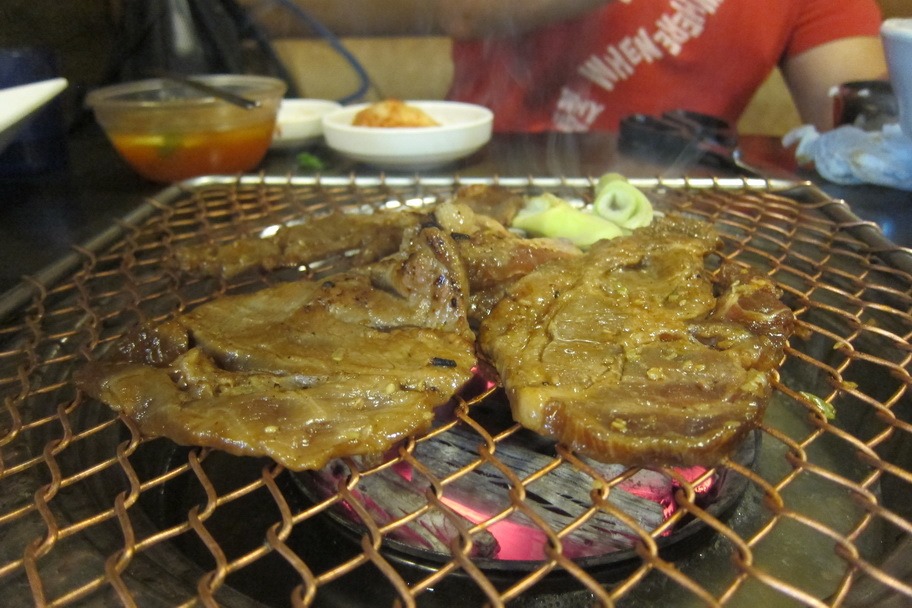 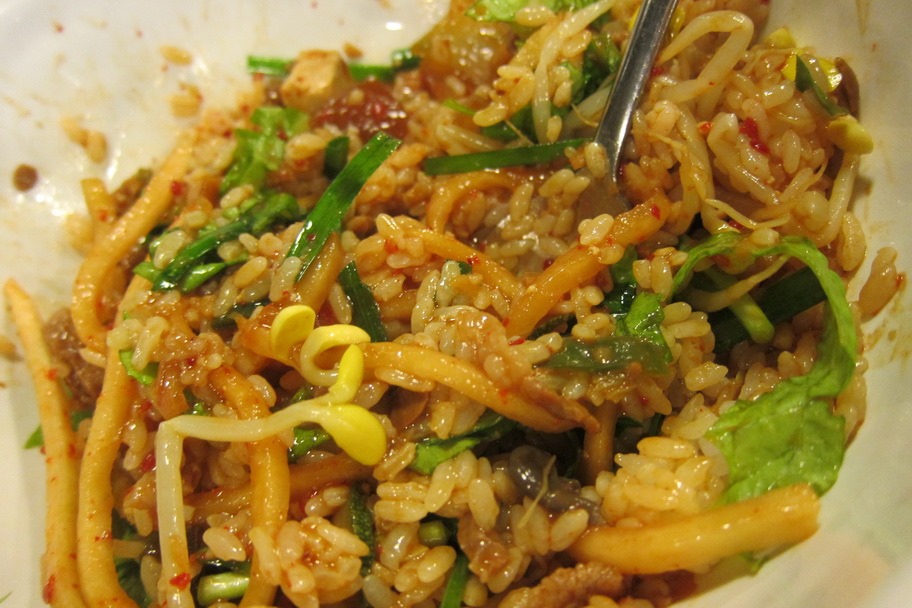 I ended up drowning my disappointment in another order of the fantastic Woo Samgyup.

Join us again tomorrow where I’ll go over Seoul’s other palaces.