This is post seven of fourteen on our trip to Northern Ireland and Croatia, minus our mini Game of Thrones tour. Those posts can be found here.

Mrs. Selfish and I have a pretty clear hierarchy when it comes to hotel preferences: Hyatt, Hilton/Starwood/Marriott, IHG, other.  There are admittedly a ton of great hotels out there, but I’m pretty cheap when it comes down to it. I mean, why pay for a good (or even a great) hotel when you can get it for free?

Mrs. Selfish and I each got the Club Carlson business cards back in the summer of 2013 because the sign-up bonus was decent: Gold status (which meant free internet & breakfast) 80,000 Club Carlson points and 40,000 on each anniversary. The real kicker, however, was the card’s #1 feature: redeem one award night, and get a second one free! 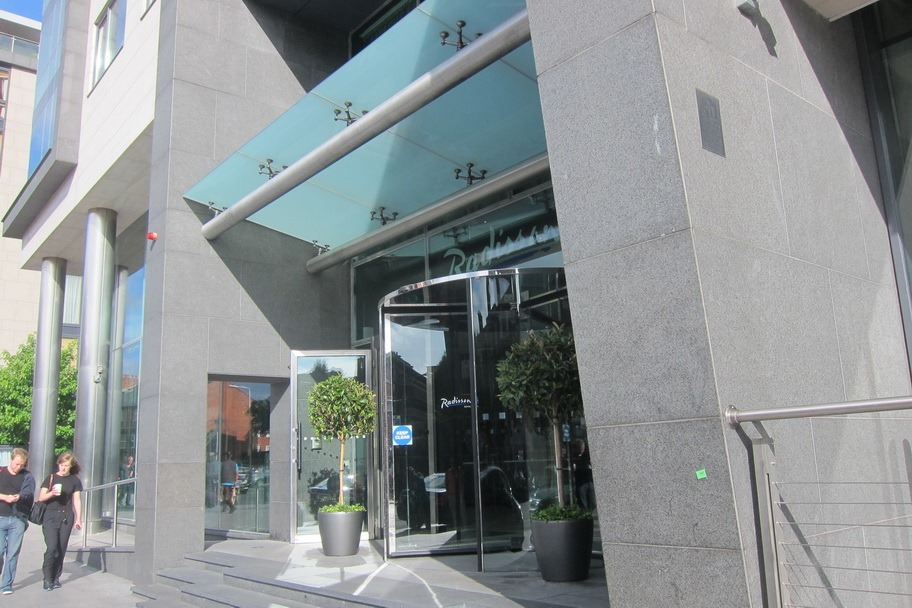 Located right behind Dublin Castle, the Radisson Blue Royal Hotel is within a convenient walking distance of just about every major Dublin attraction and starts at just 44,000 Club Carlson points for two nights.

Our flight from Charlotte landed around 7am, which meant we arrived at the hotel around 8am. Much too early for check-in.

Fortunately, the front desk team was super helpful, and stored our bags, telling me they’d give me a call when our upgraded “business class” room became available.

Jetlagged and bleary-eyed, Mrs. Selfish and I grabbed breakfast at a local cafe and took a long stroll around Dublin, before I received a text from the hotel at 11am that our room was ready.

The room was nice and spacious by European standards and came equipped with a few nice amenities – like slippers, which aren’t really standard in most European hotels. 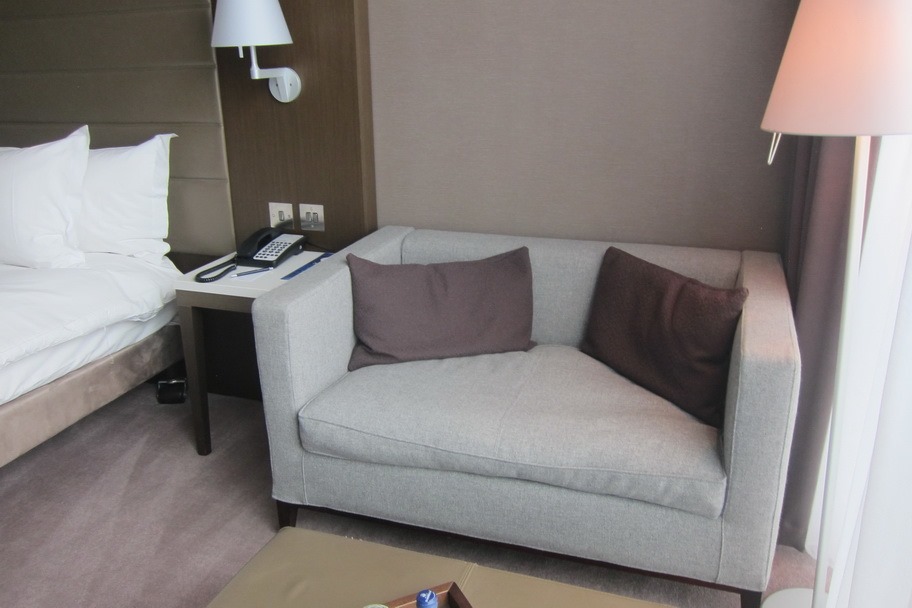 The bathroom came equipped with a standalone shower and separate bathtub, which was a pleasant surprise as well.

While the location is pretty sweet, the view leaves a little bit to be desired. As far as I could tell the hotel is directly adjacent to a housing project, which gives it a slightly rough-and-tumble feel. 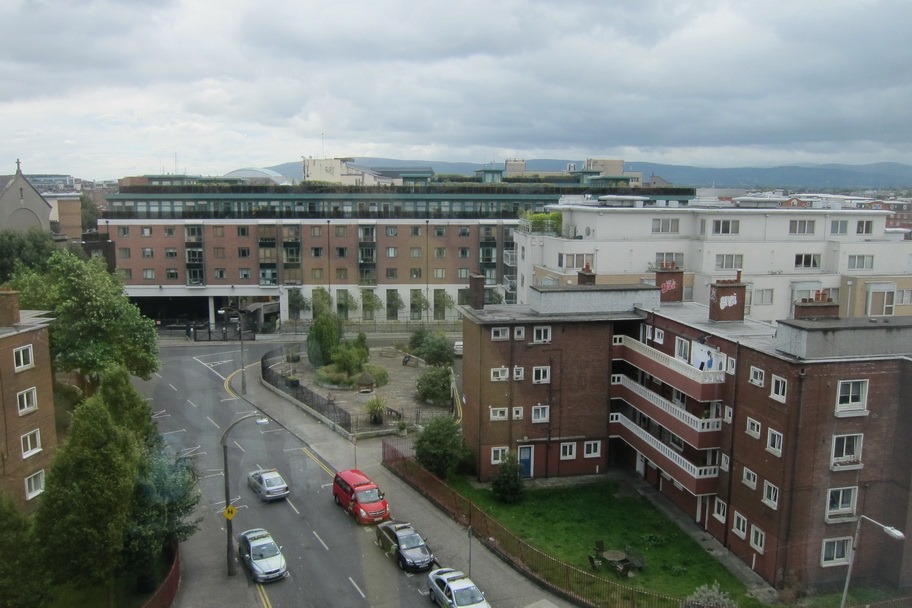 Where the hotel really shines, however, is breakfast. It’s all Irish, and all awesome. Plus they have these weird hanging globes just to let you know it’s a class act.

The fruit and juice selection is plentiful, they have tons of yogurt, and there’s even a nice hot buffet serving Irish sausages, white AND black pudding(s!), baked beans, and other staples of Irish breakfast cuisine. 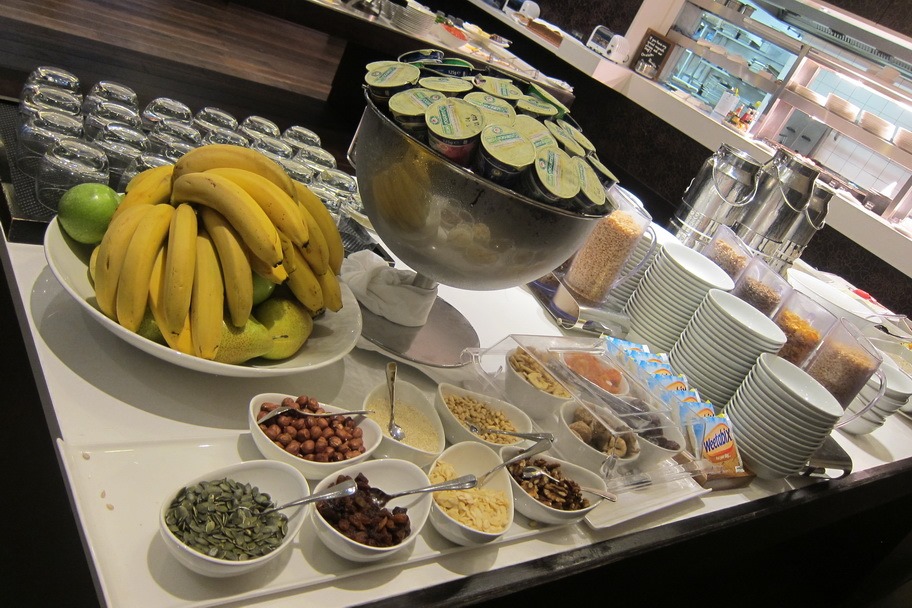 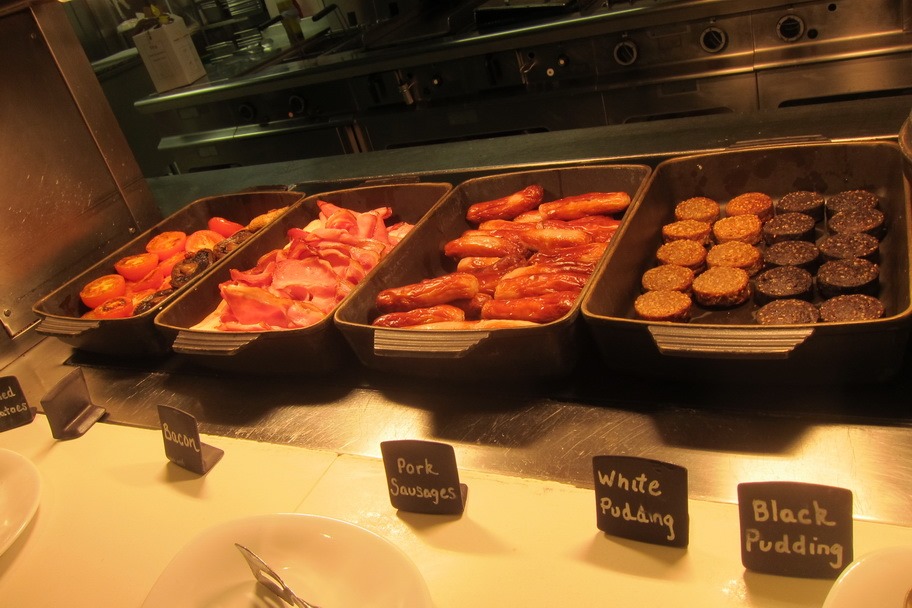 There’s a proper sliced meat selection for folks from the continent, and even a good baked goods section. Seriously, whoever is making the croissants here is clearly French. These were probably the best hotel croissants I’ve had outside of the Park Hyatt Seoul. 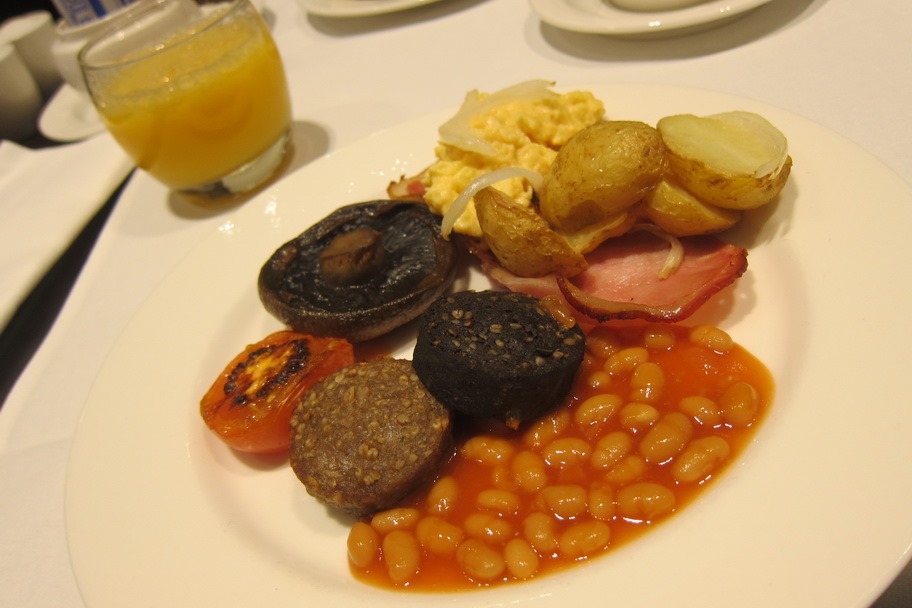 The Radisson Blu Royal Hotel is a solid entry in the chain hotel scene in Dublin. The room was impeccably clean, service was helpful and friendly, and breakfast was excellent.

For 44,000 Club Carlson points, we ended up getting a Business Room, which normally prices for 216 euros a night. Totally worth it.

The hotel is significantly cheaper as well, clocking in at 30,000 Club Carlson points for 2 nights.

The room: The Radisson Blu Letterkenny

Although we had gold status, the Radisson Blu Letterkenny was all booked up, thanks to a large Italian tour group, so no upgrades were available. Instead we ended up with a standard room on the second floor with a sweet view of the air conditioning unit. 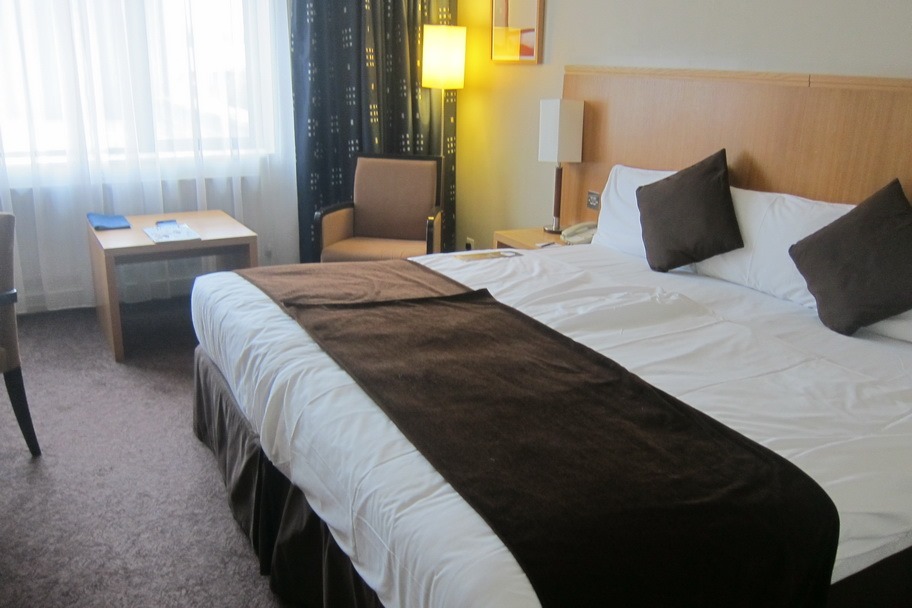 The room was… severely dated. Seriously, how can this thing even be related to the Radisson Blu Dublin? Does “Royal Hotel” differentiate the two that much?

Also, while we could see the air conditioning unit, the room’s cooling system didn’t appear to be on. Fortunately it was cool at night that opening the windows did the trick.

I also had the distinct impression that Letterkenny didn’t get too many ethnics given the way people stared at us during breakfast. Either that or not too many people snap pictures of the hotel food there. 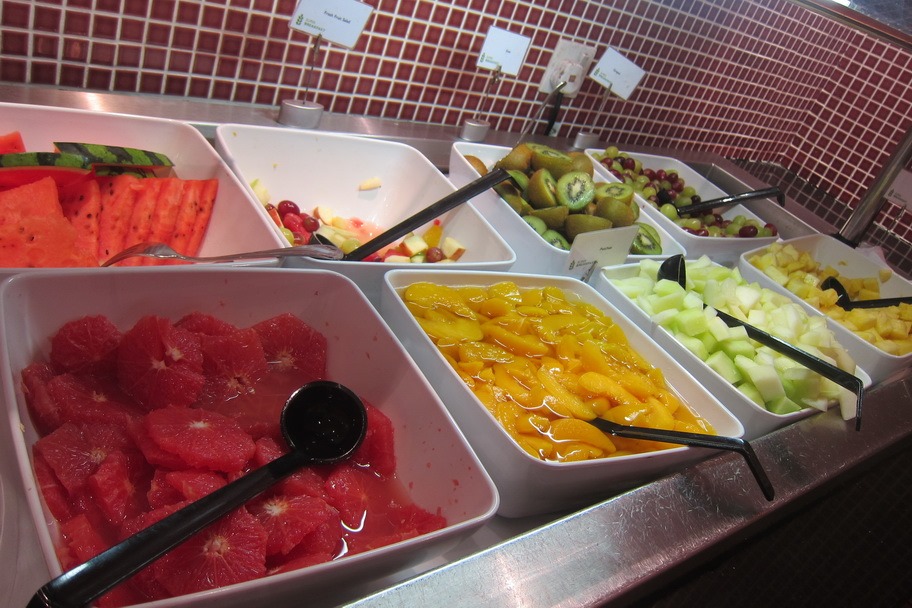 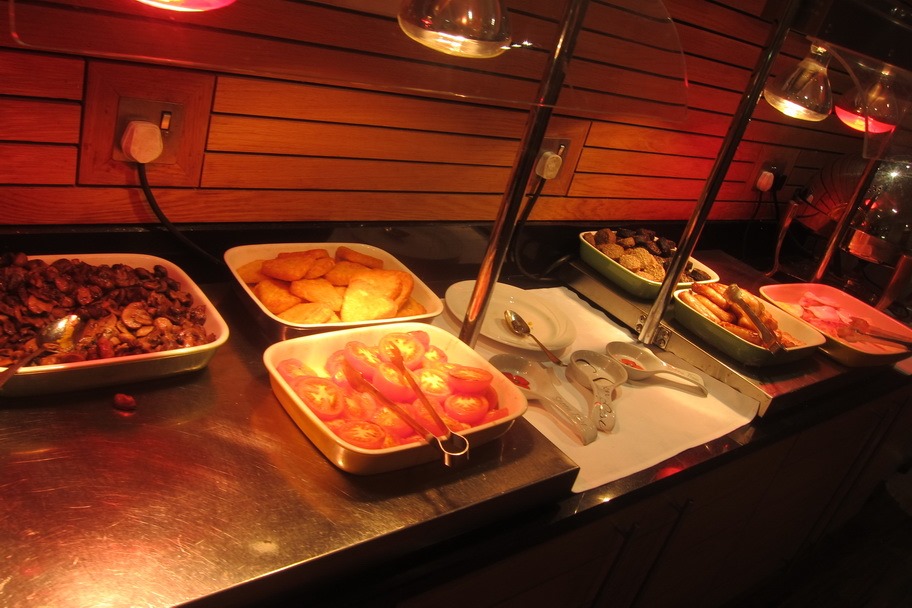 Fortunately the white & black pudding tasted identical. There must be a factory in the middle of Ireland tasked with making the country’s supply of blood puddings since they all basically taste the same – delicious!

Where the Radisson Blu Royal Hotel Dublin was awesome, the Radisson Blu Letterkenny was lackluster and dated in just about every manner. That being said, it is a very cheap hotel so I guess this is a case of “you get what you pay for.”

Still, it is VERY confusing that both hotels share the same brand. I have yet to see a hotel chain with a less consistent standard of quality. Is each Radisson Blu that radically different from the next? Since we still have a boatload of Club Carlson points, I’m this is something we’ll figure out at some point in the near future.

Joins us again tomorrow when Mrs. Selfish will talk about our first stop in Croatia, the beautiful city of Zadar.